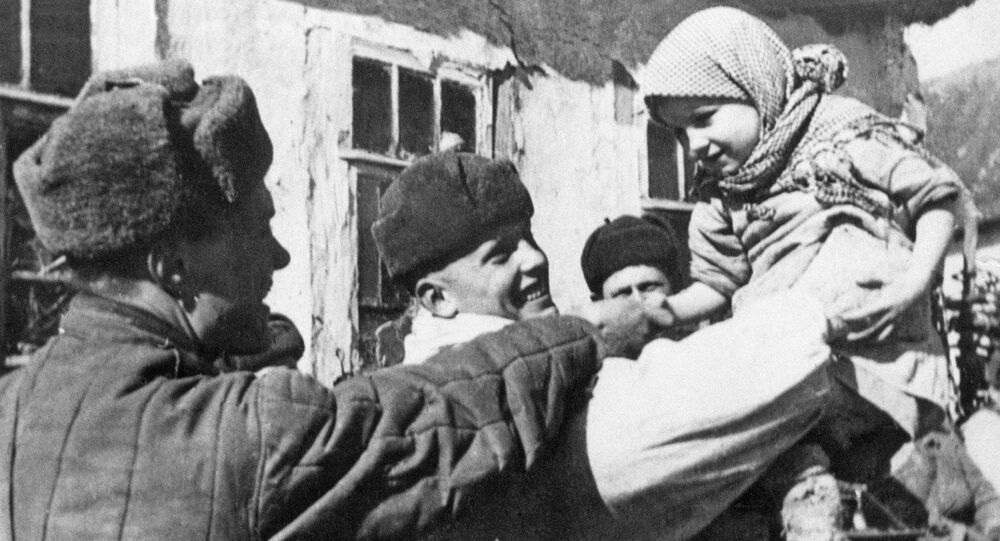 Taming Blitzkrieg: How the Red Army Freed Kursk Ahead of WWII's Biggest Battle

On February 8, 1943, Soviet troops liberated Kursk, the western Russian city whose environs later became the site of the greatest tank battle in history, from the Wehrmacht. The offensive, carefully planned and carried out with lightning speed, deprived the Nazis of one of their largest transport hubs in the USSR.

Kicking off on February 2, the official conclusion of the operation to encircle and destroy Axis forces at Stalingrad, Operation Zvezda was undertaken by the 60th Army of the Voronezh Front, commanded by Major General Ivan Chernyakhovsky.

On February 6, at 11:50 pm, Chernyakhovsky gave the order to destroy the Nazi garrison in the city. All through the night, four Red Army infantry divisions, a rifle cadet brigade and four tank brigades prepared for the attack on the city, which began on the morning of February 7.

© Sputnik / Alexander Kapustyanskiy
Lieutenant General Ivan Chernyakhovsky (centre) with commissioned officers at the 60th army staff office
© Sputnik / George Zelma
Russian Ministry of Defense Unveils Unique Docs on 75th Anniversary of Victory at Stalingrad
Russian military journalist Andrei Kotz recalled that "the Germans clearly weren't ready to surrender Kursk without a fight. They understood that Soviet forces, following the liberation of Voronezh on January 25, 1943, would move further west, and would very quickly end up on the outskirts of the city."

"Kursk was soon turned into an impregnable fortress," the contributor wrote. "Its occupiers built up a powerful, two-layer defensive network, featuring dozens of mortar, artillery and machine-gun emplacements. Two Wehrmacht infantry divisions and a tank division were prepared for the fight for the city, with six more divisions dug in on its outskirts. The Germans expected to stop Soviet forces at the distant approaches to the city, and if this did not succeed, to pull them into grueling street battles. The Red Army, weakened by a long offensive, had to take the city as fast as possible; any delay would only multiply losses."

In the early hours of February 7, units of the 60th Army began a methodical operation to crack enemy defenses. Lieutenant-Colonel Stephan Perekalskiy, commander of the 322nd infantry division, showed extraordinary vigor during the operation, attacking enemy positions from multiple points simultaneously along their flank, eventually breaking through to wreak havoc on enemy positions. The Wehrmacht's infantry retreated into the city, with the first layer of defenses, meant to stop the Soviet offensive in its tracks, lasting less than one day.

© Sputnik / Valeriy Melnikov
Heart-Breaking Stories of Former Nazi Camp Prisoners
By the early morning of February 8, the Red Army began the operation to storm the city proper. Perekalskiy's 322nd division, along with the 248th rifle cadet brigade, smashed enemy positions one after another, splitting them up into pockets, and suppressing scattered resistance with tanks, artillery and air support.

Perekalskiy personally led the attack into the city, a move which would cost him his life.

General Petr Lashchenko, the head of the operational department of the 60th Army's headquarters, recalled the commander's personal bravery after the war. "Perekalskiy, feeling at home in the turmoil of combat, rushed to areas where the balance was turning in the enemy's favor. He was wounded, but did not leave the battlefield, considering that he had no right to do so while he was on still on his own two feet. By the evening, the enemy, in turmoil, left Kursk. However, Perekalskiy did not live to see this, an enemy bullet having taken the commander's life."

The men under Perekalsky's command provided more details, recalling that as they approached the medical institute building, they were forced into cover about 100 meters from its entrance by an enemy machinegun. Realizing there was no chance of suppressing the gun at their current distance, Perekalskiy stood up and dashed toward the building, serving as an example to his men, which did the same. Suffering a bullet wound to the chest, he was killed, but his action brought his troops close enough to the building to take out the enemy gun with their grenades. Eyewitnesses said that the commander's last words were "friends, take the city." The officer was posthumously awarded the Hero of the Soviet Union title for his bravery.

Elsewhere in the city, fierce fighting continued until the evening of February 8. By nightfall, the last of the resistance was suppressed, and soldiers climbed to the roof of the building of the Palace of Culture to hoist the red flag. Remaining enemy formations fled west and south.

© Sputnik / Gregory
Fight for the Skies Over the Motherland: The Fiercest Eastern Front Air Battles of WWII
In the course of the operation, the Wehrmacht lost an estimated 8,000 dead and wounded, with the Red Army capturing half a dozen tanks, 250 guns, 300 vehicles, 192 motorcycles, about a million rounds of ammunition and 15,000 aerial bombs. Over 500 Red Army soldiers and officers were awarded for acts of bravery during the operation, and Commander Chernyakhovsky, who would perish in the operation to liberate northern Poland in February 1945, was promoted to Lieutenant General.

According to Kotz, the operation to free Kursk "once again proved that the Red Army were unmatched in street fighting, and that they had mastered the tactic of the lightning offensive even than the Blitzkrieg's inventors. For the Germans, the liberation of Kursk was a heavy blow. The loss of an important city of nearly 200 square km in just two days of fighting was a great humiliation for Hitler's generals."

The Wehrmacht would attempt to regain control over the city in the summer of 1943 in what would become the largest tank battle in history. Its plan was to cut through the bulge formed by the Red Army from the north and south, and to regain its control over the area. However, Soviet forces, including the 60th Army commanded by Lieutenant General Chernyakhovsky, would not let them back in. For the Nazis, the crucible at Kursk became the final strategic offensive that they would ever carry out on the Eastern Front.

Ghosts of Combat Past: Half-Ton WWII Bomb Found and Defused in Hong Kong