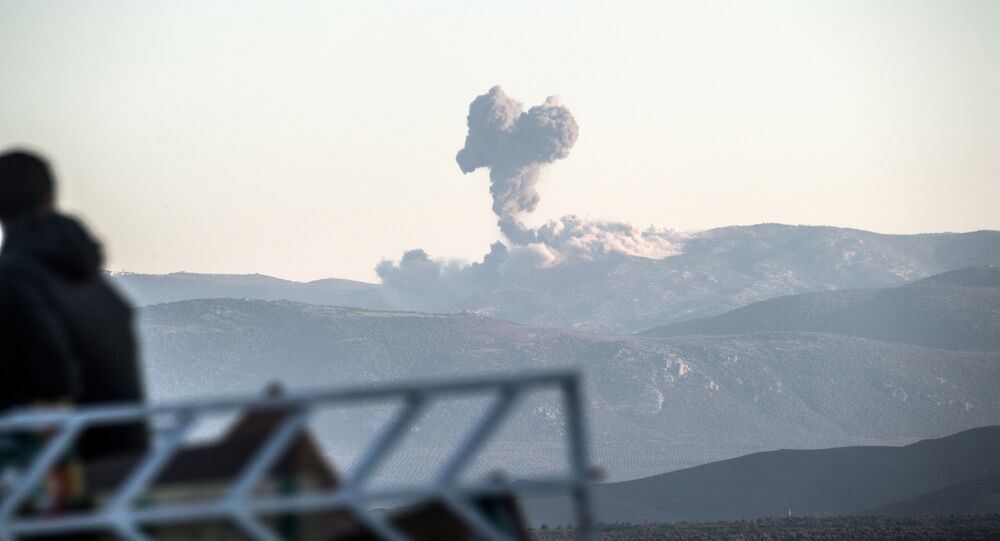 A summary of the first day of a globally-disputed military operation launched by the Turkey against Kurdish organizations in Syria.

On January 20 Turkey made good on threats that it would begin a military operation against Kurds in Syria, as Turkish jets bombed targets around the Kurdish-populated Syrian city of Afrin.

"From this moment, the heroic Turkish Armed Forces have launched an air operation to destroy the PYD/PKK and Daesh elements in Afrin," Yildirim said.

"The Afrin operation has de-facto been started on the ground," Erdogan said in a televised speech, adding that, "this will be followed by Manbij," referring to another Kurdish-controlled Syrian town.

The Turkish Foreign Minister stated that Turkey had notified Russia, Syria, the UN and the US about the operation.

"We are notifying the Syrian regime, as well as all other sides, including the United Nations, about the operation in written form," Turkish Minister of Foreign Affairs Mevlut Cavusoglu said, quoted by the NTV broadcaster.

Officials in Damascus, however, denied that Erdogan notified them of the operation and declared it to be a violation of Syrian sovereignty.

"Syria completely denies claims by the Turkish regime that it was informed of this military operation," a Syrian foreign ministry source told state news agency SANA.

"The Syrian Arab Republic decisively condemns Turkish aggression against the town of Afrin, which is an inseparable part of Syria,"

Also on January 20, Yildirim announced that airstrikes will be followed by an invasion by Turkish ground forces to "carry out the necessary work."

"They will move together with the Free Syria Army," he said, referring to a Turkish-backed militant group.

Arab-Kurdish Syrian Democratic Forces (SDF) issued a statement denying any hostile operations against Turkey and saying that they will defend themselves against what they claim is Turkish aggression.

"If attacked, we will have no choice but to defend ourselves and our people, but we state in front of the world that we harbor no hostile intent towards Turkey and would only take measures in our own defense in the event of hostile operations against our people," the organization added.

The results of the initial strikes were announced in a statement of the Turkish General Staff.

"Out of 113 designated targets of the Democratic Union Party (PYD) Kurdish Syrian terrorist group, 108 have been destroyed as of 18:30 [15:30 GMT]. All the killed and wounded people, who have been sent to hospitals, are members of terrorist groups," the statement asserted.

The later statement was refuted by Rojahat Roj, press secretary of the Kurdish Self-Defense Forces YPG in Afrin. Talking to Sputnik, he said that Turkish air Forces hit some 100 positions in the Afrin area, but did not injure any YPG staff.

"According to the recent figures, 10 people were injured, including three people who suffered severe wounds. The list of injured people includes two children," the press service said, adding that local authorities had called on the residents of Afrin to donate blood to victims of the Turkish airstrikes.

During the airstrikes, Turkish air forces reportedly hit the Menagh Military Airbase, which the US has used for supplying weapons to Kurdish armed forces in their participation in the successful fight against Daesh, according to Turkish newspaper Hurriyet.

In an interview to Radio Sputnik, Professor Dr. Bora Bayraktar from Kultuk University in Istanbul opined that the United States, with whom Turkey has had tense relations for the last few years, intended to use Kurdish territory to chop off a part of Syrian territory so as to create a pseudo-state and use it as grounds to conduct further military operations in the Middle East.

US State Department spokesperson Heather Nauert called on the country not to engage in any invasion of Syria's Afrin, reiterating a statement made by US Secretary of State Rex Tillerson, who also assured that the US had no intention of building a Syria-Turkey border force, saying the issue, which has incensed Ankara, had been "misportrayed."

In a statement, the Russian Ministry of Defense said that Russia was withdrawing its troops from Syria's Afrin, the target of the Turkish offensive.

"The command of the Russian group of troops in Syria has taken measures to ensure the security of Russian servicemen located in the district of Afrin, where the Turkish Armed Forces launched a special operation against the Kurdish armed groups," the statement read.

The Russian Foreign Ministry stated on Saturday that Moscow was closely following the situation in Syria's Afrin and was concerned by the news about the Turkish military engagement in the city.

US Trying to Use Syria as a Garrison for Operations in Middle East, Scholar Says

WATCH the Beginning of Turkey's Military Operation in Northern Syria

US Troops Shouldn't Remain in Syria Without Damascus' Approval - Moscow