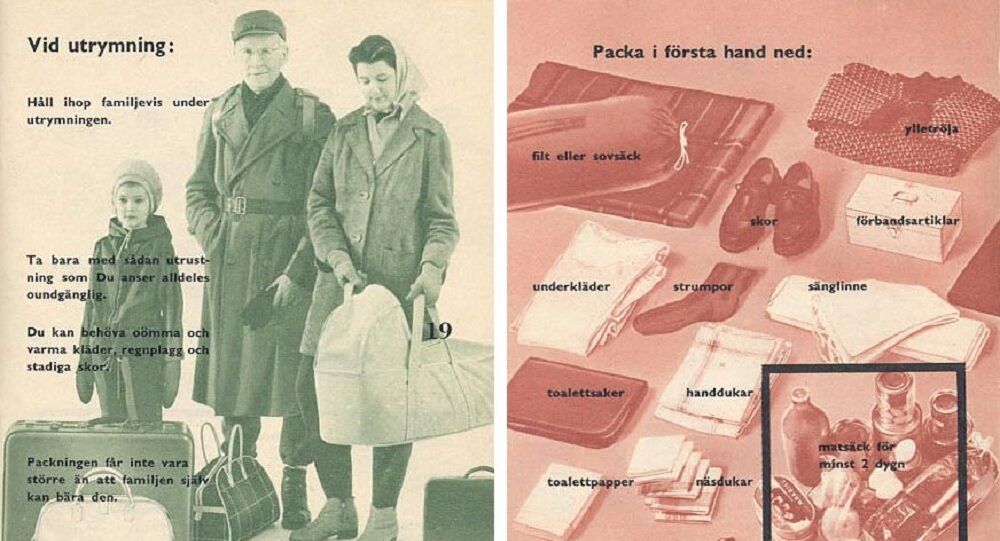 After an almost 30-year hiatus, Sweden is reissuing a Cold War-era pamphlet amid mounting security concerns. In a bid to boost the nation's preparedness for war, the updated pamphlet will be delivered to all households in the Nordic country of ten million.

Om kriget kommer ("If the War Comes") was first issued in the 1940s, when neutral Sweden was believed to be facing an imminent enemy invasion. During the Emergency Preparedness Week at the end of May 2018, a rehashed version of the brochure will be delivered to 4.7 million Swedish households, less than 30 years after falling into redundancy in 1991.

Christina Andersson of the Swedish Civil Contingencies Agency (MSB), tasked with producing the new version of the booklet, told the Aftonbladet daily that the government found there was a growing need for people to know how to prepare for a crisis and a threat of war.

"There are a number of concepts linked to warfare and military attacks that we have not communicated to the people in many years. It's a challenge," Andersson said.

The updated pamphlet will therefore offer practical advice on home preparedness (including handling basics such as food, water, heating and communications), belongings to be packed to the nearest shelter (ID, clothing and gas mask) and, lastly, how to handle "fake news" and propaganda planted by the enemy.

​The resurrection of the brochure is yet another step in Sweden's massive security updates. Last year, Sweden reinstated the military draft citing recruitment issues and the perennial "Russian threat." A government review requested a doubling of Cold War-era bunkers, many of which have fallen into disuse over recent decades. The Nordic country also shifted closer to NATO, casting doubts over whether its time-tested policy of non-alignment will be maintained in the future. Lastly, Prime Minister Stefan Löfven pledged to create a new department tasked with combatting foreign psyops against Swedes prior to the 2018 general election.

Why is the Swedish government sending out leaflets to almost 5 million households instructing people what to do in case of terror attack or war?

They haven't done this in Sweden since WW2.

Something strange is going on.

​"If the War Comes" was disseminated between 1943 and 1991 and is best remembered for the following phrase: "Every statement that the resistance has ceased is FALSE!" The brochure was a nationwide effort just on a few occasions; the last editions, printed in the 1980s, were used only internally in the military education. The working name, which may later change, is "If the crisis or the war comes."