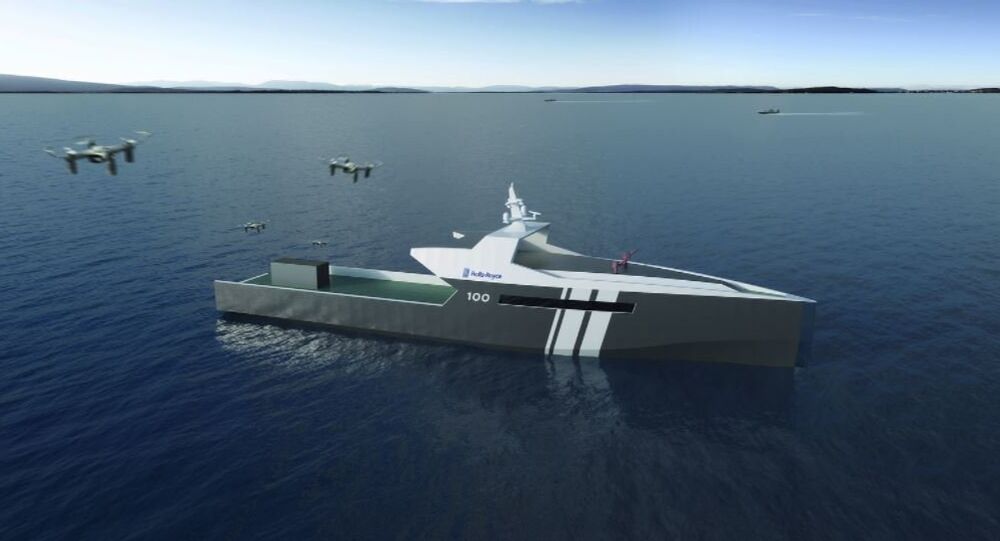 A US defense contractor and UK defense and marine contractor are considering teaming up to provide the US Navy with unmanned sea ships that launch unmanned aerial helicopters.

The unmanned ships may play an important role in the US Navy's plan to grow its fleet from 277 to 355 vessels, Military.com adds.

Last week, Sputnik reported on the US Navy's move to consider weaponizing the 12-meter Common Unmanned Surface Vehicle (CUSV), which has so far been relegated to minesweeping missions. According to a Rolls Royce spokesman, the unmanned ship with Fire Scouts on its helipad wouldn't classify as a "vehicle."

"I think when you're getting that big, it's a ship," a Rolls Royce executive told Military.com.

Even without the unmanned choppers, the unnamed sea drone could be deployed for asymmetric warfare, counter-mine warfare and equipment transport, the Rolls Royce employee said. The ship can stay out at sea for up to 100 days before returning to a port, relies on an electric engine and has generators and solar panels as a backup power source.

US Navy Chief of Naval Operations John M. Richardson asserted "there is no question that unmanned systems must also be an integral part of the future fleet" in his May 2017 vision for "The Future Navy."

"The advantages such systems offer are even greater when they incorporate autonomy and machine learning," Richardson noted, adding that a "355-ship Navy using current technology is insufficient for maintaining maritime superiority. We must grow, yes. But we must also implement new ways of operating our battle fleet, which will comprise new types of ships."

Rise of Machines? WATCH Drone Spin Out of Control, Attack People in Japan