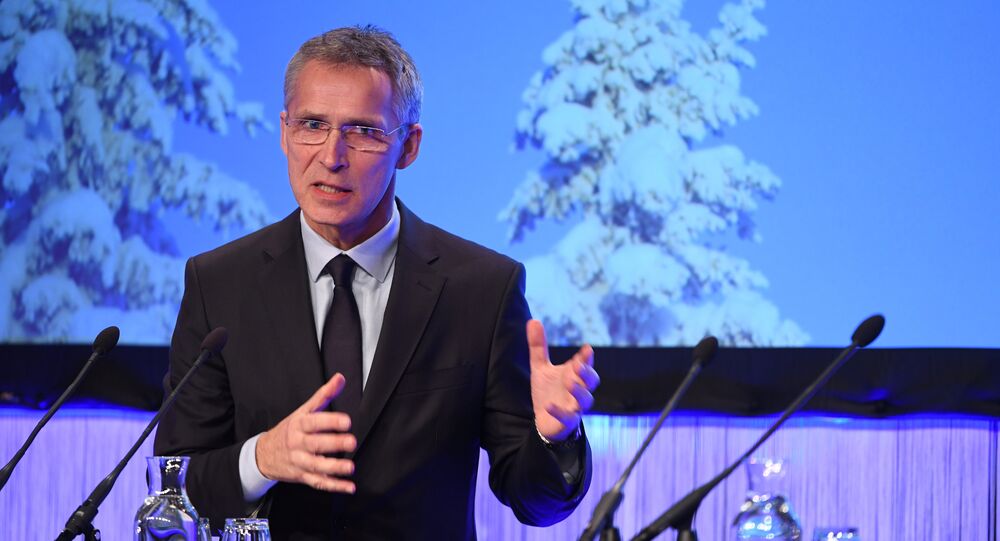 The perennial NATO debate in non-aligned Sweden has flared up again as recent polls have indicated growing support for joining the alliance. The recurrent discussion has been fueled by the NATO Secretary General's remarks that no military assistance may be guaranteed unless Stockholm applies for membership.

A recent survey carried out by pollster Inizio on behalf of the tabloid daily Aftonbladet has indicated a shift in public opinion amid the Swedish government and media's incessant speculations about a "Russian threat" and Moscow's alleged meddling in Stockholm's affairs.

In the poll, 43 percent wanted Sweden to join NATO, whereas 37 were in favor of retaining their non-aligned status and another 20 percent were undecided. Last year, 37 percent supported joining the alliance, versus 42 percent of the supporters of non-alignment. This equals a 6-percent rise for NATO adherents and a 5-percent decline for non-alignment devotees.

While Sweden's decade-long policy has followed the motto "freedom of military alliance has served us well" and there is currently no parliamentary majority in favor NATO, the support for joining the alliance has been cementing among opposition parties. All the parties comprising the opposition platform alliance, consisting of the Center Party, the Christian Democrats, the Conservatives and the Liberals are now in favor of joining NATO, albeit with different prerequisites. For instance, the Center Party regards NATO membership as required only in case of a broad political consensus. In addition, joining the alliance together with the fellow Nordic nation Finland is desirable.

By contrast, the ruling "red-green" coalition comprised of the Social Democrats and the Greens oppose the idea of forfeiting the freedom of alliance, along with the maverick right-wing Sweden Democrats. However, the Swedish government has come under mounting pressure regarding the NATO question.

© AP Photo / Ebrahim Noroozi
Sweden Starts Anti-'Fake News' Body for Mental Defense Against 'Russian Threat'
In late 2017, a cross-party security policy committee presented a report on the overall security situation in Sweden, in which seven out of eight parliamentary parties claimed an increased military threat to the nation. Svenska Dagbladet political commentator Jonas Gummesson argued that it was high time for Prime Minister Stefan Löfven to take a stance and consider the possibility of NATO membership.

"The question for Stefan Löfven is how this threat, coupled with the lack of coordinated defense planning, should affecting the government's view of NATO," Gummesson wrote.

Conservative leader Ulf Kristersson argued that Sweden will have joined NATO within ten years, arguing that the "Social Democrats' veto" was not everlasting, the Svenska Dagbladet daily reported.

Meanwhile, Conservative Youth argued that the Host Nation Agreement with NATO, the declaration solidarity in the Lisbon Treaty and Sweden's accession to Stratcom were all clear examples of how Sweden had already effectively forfeited its 200-year-old neutrality. In a pro-NATO opinion piece penned by its leader Benjamin Dousa, Conservative Youth called for a permanent NATO base in southeastern Sweden, "preferably in Blekinge or on Gotland," as soon as possible, even before a NATO membership has come into force.

© AFP 2020 / PETRAS MALUKAS
Famine, Panic, Paralysis: Sweden Finds Itself Unprepared for Cyberattacks, Wars
The Swedish security debate was exacerbated by NATO Secretary General Jens Stoltenberg. Prior to the annual security conference People and Defense, Stoltenberg stressed that Stockholm could not rely on NATO's assistance, despite its close partnership, unless joining in as full member.

"No, there is no guarantee. By contrast, a NATO country is guaranteed NATO's aid. For a partner country, an assessment of the given situation will be concluded," Stoltenberg told the daily Dagens Nyheter, while stressing that "no country in the world was closer to NATO than Sweden."

According to a survey by Dagens Nyheter, though, almost half of Swedes count on NATO's aid if the Nordic country were to face a military aggression. Among NATO opponents, oddly enough, the corresponding figure was six out of ten.