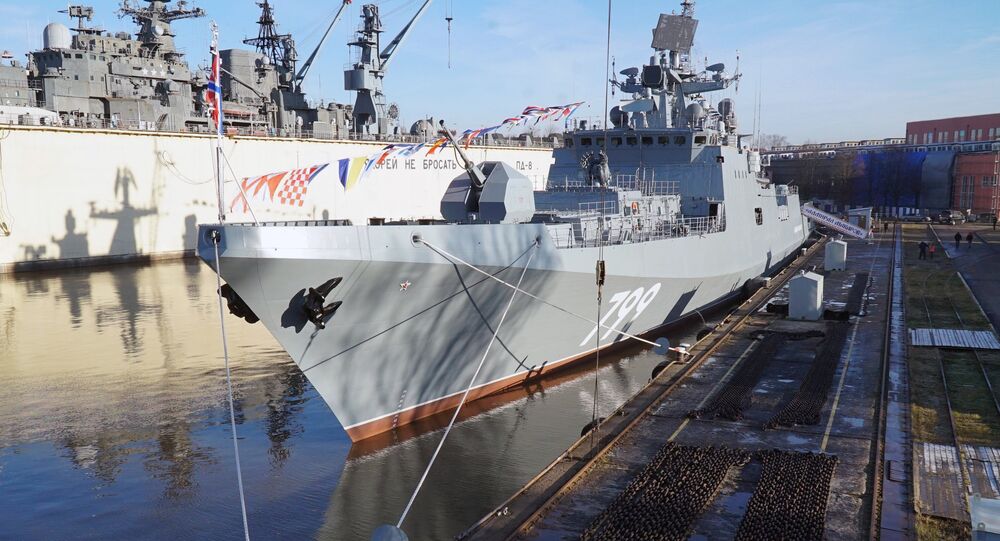 On Wednesday, a ceremony took place to raise the flag on the Admiral Makarov frigate, the latest addition to the Russian Navy. Admiral Makarov is the third project 11356 frigate to join the Black Sea Fleet, with Admiral Grigorovich and Admiral Essen already being in service. RIA Novosti observer Andrei Kotz takes a closer look at the new ship.

The frigates of project 11356 were initially designed to fight against both surface targets and submarines, to repel enemy aviation attacks, to destroy ground targets with high-precision weapons and to take part in counterterrorism and antipiracy missions.

A project 11356 frigate is truly multipurpose and capable of accomplishing almost any combat task in its operational theater.

The Russian Defense Ministry has ordered a total of six ships of this class, all named after prominent Russian admirals. The three remaining frigates – Admiral Butakov, Admiral Istomin and Admiral Kornilov – have already been floated out and are planned to enter service in 2020-2021.

Admiral Makarov will join the most powerful force within the Black Sea Fleet, the 30th division of combat ships led by the Moskva guided missile cruiser. In the future, the new frigates will be the backbone of this division.

The project 11356 frigate packs a formidable arsenal of weapons capable of hitting different types of targets. Each ship has eight 3M22 launchers for Kalibr-NK cruise missiles (operational range of up to 2,500 kilometers) and Oniks anti-ship missiles (up to 500 kilometers). The Admiral Grigorovich and Admiral Essen frigates were involved in Russia’s counterterrorism operation in Syria in 2016-2017, having repeatedly delivered  high-precision strikes at enemy targets.

Admiral Makarov also has the AK-190 100-mm versatile artillery system with an operation range of up to 21 kilometers. As for anti-submarine warfare, the ship has the RBU-6000 12-barrel bomb launcher and four 533-mm torpedo launchers. In addition, there is the Shtil-1 anti-aircraft defensive system, with a range of up to 50 kilometers, as well as a pair of AK-630M six-barrel anti-aircraft cannons.

© Photo : Oleg Kuleshov
Hypersonic Missiles and Robotics: What is Known About Russia's 5th Gen Husky-Class Stealth Subs
All of the weapons are controlled by the Puma fire-command system, including target seeking and acquisition.

The new ship also has an advanced computerized control system. As a result, the 4,035-ton and 125-meter-long frigate is operated by a crew of only 180, including 18 officers. According to instructions, the ship also carries a group of 20 marines and a Ka-27PL or Ka-31 anti-submarine helicopter with a crew.

Admiral Makarov features stealth technologies and a low level of noise, primarily due to their COCAG two-shaft gas turbine engine, which generates a total of 56,000 horsepower. The ship can reach speeds of up to 30 knots (56 kilometers per hour) and has a sea endurance of 30 days.

In fact, project 11356 is the extensive modernization of the Soviet-era Burevestnik (Storm Petrel) project, which included 28 combat ships built since 1968 (projects 1135 and 1135M). This is why the construction of each of the project 11356 frigates took as much as five years, from roll out to entering service.

Two of the 28 frigates built during the Soviet period are still in service with the Black Sea Fleet. The Burevestnik-class ships gained a reputation for their outstanding seagoing capabilities and reliability. Back in the day, they played a key tactical role in the Soviet navy.

While developing project 11356, Russian engineers had in mind the combat and maintenance experience of the Burevestnik frigates, making a number of upgrades and adding new technologies.

Today, amid the ongoing crisis in Syria and NATO’s increased activities in the Black Sea, the Russian Black Sea Fleet needs powerful, fast and compact ships that would  perform equally well against different types of targets, and these are exactly what project 11356 packs.

WATCH: Russian Frigate Targets Terrorists in Syria With Missiles From the Med