UK Royal Navy reported that its frigate HMS St Albans escorted the Russian frigate through the North Sea and "areas of UK interest".

MOSCOW (Sputnik) — UK Royal Navy's frigate HMS St Albans escorted the Russian frigate Admiral Gorshkov when it was in the North Sea close to the UK territorial waters, the Navy said on Tuesday in a statement.

"Royal Navy frigate HMS St Albans escorted a Russian warship through the North Sea and areas of UK interest on Christmas Day. The Portsmouth-based Type 23 frigate was called upon to sail on 23 December and keep watch on the new Russian warship Admiral Gorshkov as it passed close to UK territorial waters," the statement said. 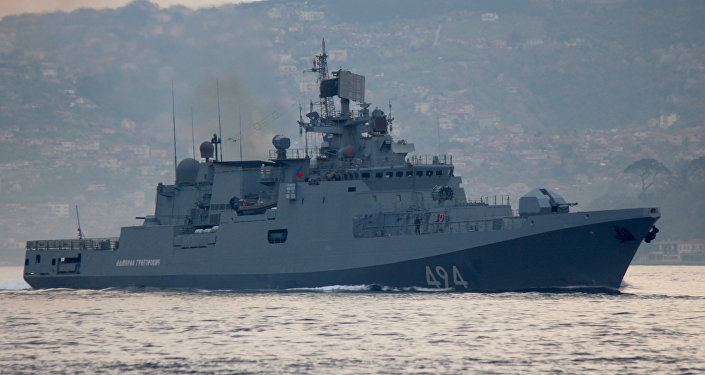 © REUTERS / Yoruk Isik
Russian Navy Gets Brand New Admiral Makarov Frigate
The Navy pointed out that the HMS St Albans would return to the port of Portsmouth later on Tuesday.

“I will not hesitate in defending our waters or tolerate any form of aggression … Britain will never be intimidated when it comes to protecting our country, our people, and our national interests," UK Defense Secretary Gavin Williamson said commenting on the incident, as quoted by the statement.

According to the Royal Navy, that is not the first such case during the 2017 Christmas holiday as on the Christmas Eve the HMS Tyne patrol vessel was called to escort another Russian vessel.