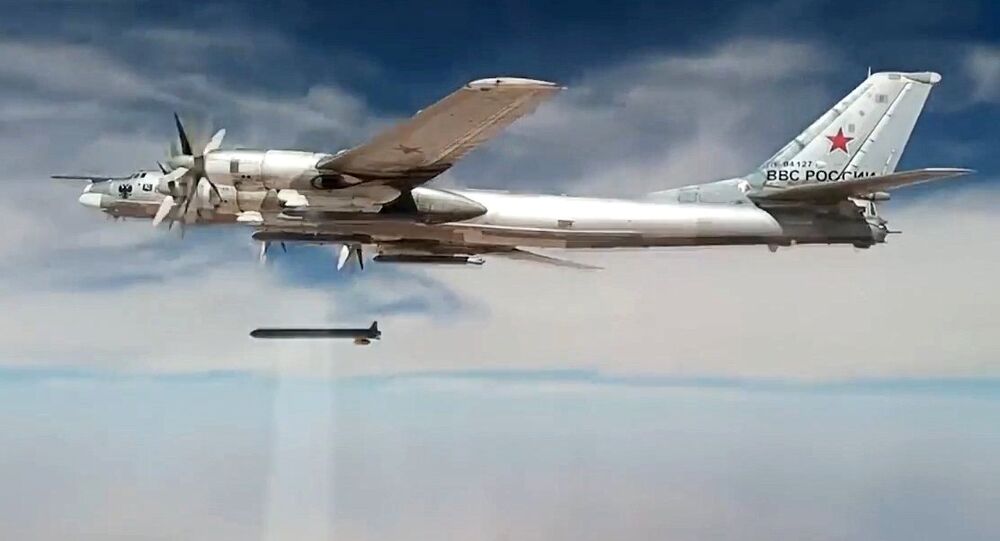 Winged Snipers: Best of the Best of Russia's Ballistic and Cruise Missiles

On Saturday, the Long Range Aviation branch of Russia's Aerospace Forces celebrates its professional holiday. In honor of the event, military observer Andrei Kotz decided to take a look at a few of the best-known air-launched ballistic and cruise missiles in Russia's arsenal.

On December 23, 1913, engineers carried out the first test flight of the Sikorsky Ilya Muromets, a class of heavy bombers that would see action on the Eastern Front in World War I. A century on, Russia's Range Aviation has come a long way, and is able to traverse vast distances to launch its deadly payload from outside the range of enemy air defenses. Focusing on these weapons, RIA Novosti military observer Andrei Kotz outlined the top missiles giving Russian air power its global reach.

The Kh-15 air-launched ballistic nuclear-capable missile was adopted into the Soviet Air Force in 1980 as a direct response to the AGM-69 SRAM, a US missile introduced a decade earlier. Although the Kh-15 has a longer maximum range (up to 300 km compared with the AGM-69's 200 km), both systems have the same purpose: to break through and destroy enemy air defenses and attack ground-based targets. Unlike its US nuclear-only counterpart, the Kh-15's 300 kiloton warhead was later complemented by a conventional variant.

Created by the Dubna-based Raduga Design Bureau, which would later become known for its pioneering work on hypersonic weapons, the Kh-15 was created specifically for use by the Tu-22M3 and Tu-95 strategic bombers, as well as the then up-and-coming Tu-160.

According to Kotz, one of the Kh-15's defining characteristics, and the feature providing it with such impressive longevity, is its unique flight trajectory. Normally launched between 50-280 km from its target, the missile gains altitude, climbing to about 40,000 meters, before abruptly switching course and diving at a speed of Mach 5. At this stage, it becomes physically impossible to intercept.

© Photo : Oleg Kuleshov
Hypersonic Missiles and Robotics: What is Known About Russia's 5th Gen Husky-Class Stealth Subs
The main drawback of the Kh-15 is its relatively short range, making it viable for sustained use only against targets which are not heavily protected by long-range air defenses.

On the basis of the Kh-15, Soviet and Russian scientists later developed the Kh-15P and Kh-15S. The former features a passive seeker and is fitted with a high-explosive warhead, making it optimal for use against enemy radar. The latter is an anti-ship system, equipped with a cumulative high-explosive warhead and active radar guidance system. In nuclear mode, the Kh-15S has a destructive radius of between 60 and 160 km. A single maritime strike Tu-160 is capable of carrying up to 24 Kh-15S missiles onboard.

The supersonic Kh-32 anti-ship cruise missile is a deep modernization of the Soviet Kh-22, a weapon designated for the same use.

Also created at Raduga, the Kh-22 was created to destroy carrier strike groups with its 1,000 kg of cumulative explosives or 350-1,000 kiloton nuclear warhead. Fitted aboard Tu-16K, Tu-22K, Tu-22M2/3 and Tu-95K aircraft, and launched from up to 600 km from their targets, Kh-22s were primarily aimed at challenging US naval superiority in the Pacific Ocean during the Cold War. Soviet Air Force doctrine called for the deployment of up to 80 aircraft at a time against a single carrier group, tasked with destroying or crippling its precious aircraft-carrying vessel.

© Photo : Lockheed Martin
Lockheed Martin Inks $110Mln For Development of New Anti-Air Defense Missile
The Kh-22 had a number of shortcomings, Kotz noted, chief among them being its low resistance to enemy jamming. The effort to modernize the weapon began back in the Soviet period, but frozen in the 1990s due to the economic and geopolitical consequences of the USSR's demise.

Work on the Kh-32, designed for use by the Tu-22M3s variable-sweep wing strategic and maritime strike bomber, started up again only in 2013. With enemy jamming capabilities in mind, the weapon has a new radar design with an inertial navigation system, greater fuel capacity and a more powerful engine. The Kh-32 has an assumed range of up to 1,000 km, and flies toward its target at speeds up to Mach 4.1. As with its predecessor, the Kh-32 can carry either conventional or nuclear munitions. The Kh-32 was adopted into service with Russia's Long Range Aviation in 2016.

In line with their penchant for generational continuity, Raduga developed the Kh-555 cruise missile in the mid-2000s to replace the 80s-vintage Kh-55 and Kh-55SM. Initially, these weapons were strategic, carrying a specially created warhead with a payload of up to 500 kilotons. The range of the missiles (2,500 km for the Kh-55 and 3,000 km for the Kh-55SM) made them a formidable threat, providing Soviet Tu-160 and Tu-95 bombers the ability to launch their weapons from distances safely outside the range of enemy air defenses.

Ministry of defence of the Russian Federation
Screenshot of a Kh-555 as it is launched from a Tu-95 strategic bomber against Daesh targets in Syria.

Defining characteristics of the Kh-55 and its variants include the ability to fly at an extremely low altitude, and to maneuver in mid-flight to avoid interception.

As for the Kh-555, that weapon adds another layer of challenge to enemy air defenses. First of all, in addition to its internal Doppler navigation system, the upgraded missile makes use of satellite navigation and an optic-electronic correction system, increasing accuracy five-fold. Second, in addition to the nuclear option, the Kh-555 can carry up to 410 kg of conventional munitions. "This," the journalist noted, "was the precisely the ammunition that Russia's Tu-160 and Tu-95MS bombers repeatedly used to 'bring joy' to the Daesh terrorists in Syria."

© AP Photo / Bob Daugherty
Why INF Treaty Between US, Russia Remains Key to Global Security
The weapon's expanded explosive power did take a bite out of its range, reducing it to 2,000 km. However, with the addition of conformal fuel tanks, the Kh-555's range rises back up to 2,500 km.

According to Kotz, the Kh-101, the other upgrade coming out of the Kh-55 missile, is probably the most modern and lethal "trump card" presently available to Russia's Long Range Aviation. Over time, it is expected to replace the Kh-555 and become the main armament of the Tu-160M/M2 and Tu-95MS/MSM bombers.

Although verifiable information about the weapon remains scarce, it is known is that the Kh-101 uses a combined guidance system, including inertial and optic-electronic correction. The weapon can also receive complex data regarding its flight trajectory and its target coordinates, and can be seamlessly redirected midflight.

Gurinder Osan, File
World’s 'Deadliest' Missile BrahMos to Achieve Hypersonic Speed Within 7 Years
The Kh-101 and its nuclear warhead-equipped version, designated Kh-102, have an estimated range of up to 5,000 km, and accuracy within a five-meter radius of the target. Western security experts believe that the Kh-101 is also likely to be extremely difficult to intercept, and that components ensuring low radar visibility are used throughout the missile's casing.

Russia's workhorse Tu-95 strategic bomber can carry up to eight Kh-101s on its external suspension, while the Tu-160 can hold up to 12 in its two onboard drum launchers.

Both the Kh-101 and Kh-555 made their combat debut in Russia's anti-terrorist operation in Syria.