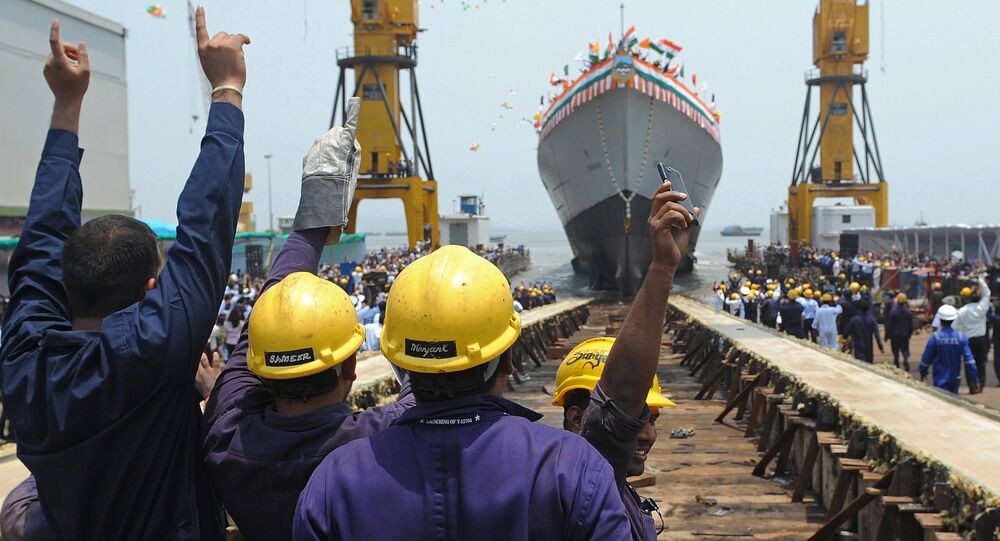 The first ship was launched on April 20, 2015 and was expected to join the Indian Navy by 2018, with the follow-on ships being delivered bi-annually. However, a delay in the supply of line shafts and gas turbines in Russia and Ukraine have pushed the project back by at least three years.

New Delhi (Sputnik) — India's ambitious mission-ready deployment of naval assets in the Indian Ocean has hit a hurdle with Russia and Ukraine delaying the supply of critical equipment to be fitted on to four destroyers that the Indian Navy intended to induct by early 2018.

© AFP 2019 / SEBASTIAN D'SOUZA
Russia, Germany in Race for Indian Navy's $7.8 Billion Submarine Tender
"There could be a delay of up to three years," India's Ministry of Defense has informed the parliamentary panel.

Under Project 15B, India's state-owned Mazgaon Dock Ltd. is constructing four destroyers at a cost of $5 billion with equipment sourced from Russia, Ukraine, and Israel. The delivery of the first warship of the class was expected by early 2018.

"The delivery of the first three ships of Project 15B scheduled in 2018, 2020 and 2022 needs to be rescheduled due to delay in supply of certain equipment sourced from Russia/Ukraine… and these are now expected to be delivered in 2021, 2022 and 2023 respectively," the Indian defense ministry said in the report it submitted to a parliamentary panel.

The parliamentary panel has asked the government to address these delays with due seriousness and find solutions.

© AP Photo / Rajanish Kakade
Indian Navy Inducts Another Russia-Assisted Guided Missile Destroyer
The 7,334-ton Project15B warship, a ‘Visakhapatnam-class destroyer' is to be equipped with line shafts manufactured by Russia's Baltic Shipyard while the Zorya gas turbines of the ship are to be sourced from Ukraine.

These destroyers will be equipped with 32 Indo-Israeli anti-ship-missile defenses called Barak 8 and 16 BrahMos supersonic cruise missiles that can sink ships or strike land targets at approximately 490 kilometers. It will have also heavyweight torpedoes that can destroy enemy submarines from a distance of up to 100 kilometers.