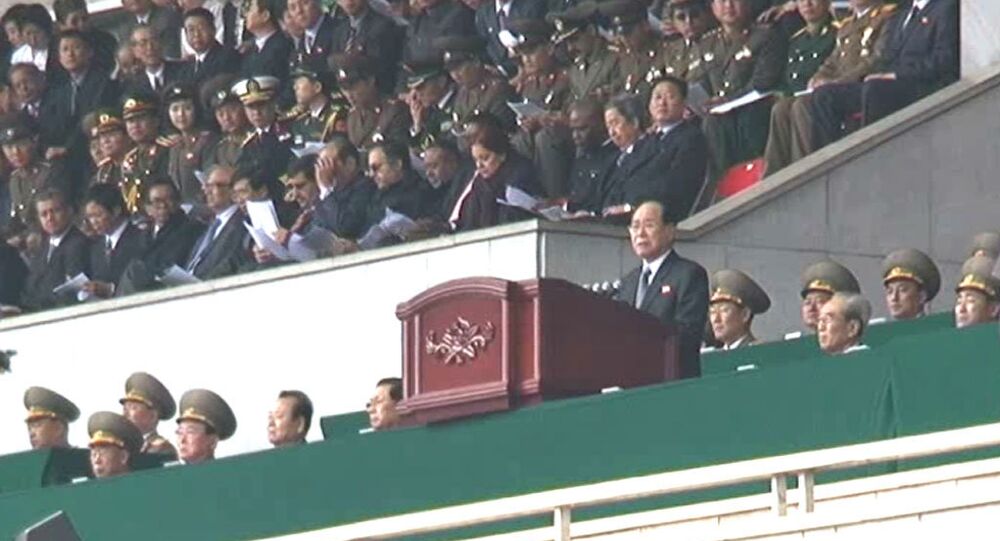 New Footage Suggests North Korea Might Have an H-Bomb (PHOTOS)

A 30-minute video showing a December 12 conference in the North Korean capital of Pyongyang may have revealed more than intended about the extent of North Korea’s military might.

The video shows, hanging on a wall of North Korean achievements in weapons production, a picture of the late Kim Jong-il probing some large sphere or cylinder. While the video is too grainy to determine whether Kim Jong-il was, in fact, inspecting a nuclear weapon, that didn't stop social media users from a frenzy of speculation.

"Is this an A-bomb or [something]?" one netizen wondered.

For what it's worth, the weapon in the picture appears to bear a number of a similarities to the hydrogen bomb Kim Jong-un allegedly posed next to this year. But according to the BBC, there aren't any publicly available images of the late Kim photographed next to a nuclear weapon.

North Korean TV appears to have shown an image late leader Kim Jong-il inspecting one of the country's first ever atomic bombs. The photograph has not been seen before in the West. pic.twitter.com/LN8Fi3xhro

​According to the Korea Central News Agency, the conference reviewed "the achievements and gains in the work to implement the party's policy on the munitions industry" and was intended to give "full play to the invincible might of socialist Korea."

"Kim Jong-il carried out the regime's first two tests so they definitely had [atomic weapons] during his time and they probably were about that size," Shea Cotton of the James Martin Centre for Nonproliferation Studies told news.com.au.

"I don't believe this was accidentally released as part of some slip-up, but neither do I think this was a purposeful act. I think in many ways, the regime doesn't care if we [the US] know they have these weapons," Cotton said.

‘Trump is Merely Bluffing' About Launching Strike Against North Korea