Given the present pace at which India’s submarine projects are progressing, the Indian Navy’s projected fleet strength looks impressive, but in reality, most of the existing submarines are too old to continue service, making it a challenge for it to achieve its target of 24 submarines by 2030.

New Delhi (Sputnik) — The Indian Navy has received the much awaited Scorpene class submarine — INS Kalvari after a wait of over five years. The submarine was scheduled for induction in 2012-13 but the project got delayed due to controversies and the alleged ineptness of Indian shipyard to absorb the French technology and funding. Indian Navy's Western Command that guards the Indian waters near Pakistan will operate the submarine. 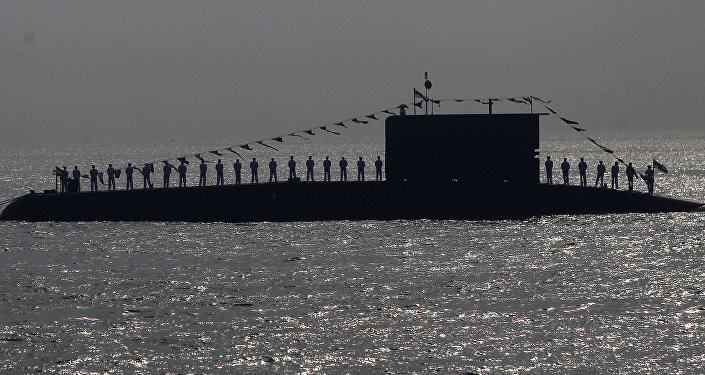 © AP Photo / Rafiq Maqbool
Indian Navy Poised to Join Elite League: Modern Submarine Rescue Capability
INS Kalvari is touted to be one of the quietest and most lethal submarines among its counterparts all over the world. However, the Indian Navy can ensure optimal utilization of the submarine only after it is fitted with its primary weapon — torpedoes — and air-independent propulsion systems, the purchase of which is hanging in the balance due to controversies. Nevertheless, the Indian defense ministry has said that despite its sub-optimal strength, the commissioning of INS Kalvari will augment the capability of the Indian Navy.

However, achieving the target of 24 submarines by 2030 would be a huge challenge for the Indian Navy as 13 of its existing conventional boats are 17-31 years old and need an immediate upgrade. Moreover, most of them would retire by 2030.

Commissioning of INS Kalvari adds strength to India's defence capabilities & is an occasion of great pride for India. This diesel-electric attack submarine ws built for the Indian Navy by Mazagon Dock Shipbuilders Ltd & is 1st of 6submarines fr @indiannavy. pic.twitter.com/KkJ7qfUBMi

"Achieving the target of 24 submarines by 2030 would be extremely challenging. Definitely, it is a matter of concern for us but at the same time, the Indian Navy is continuously working to enhance the capability of Shishumar and Sindhugosh class submarine," Cmde. Abhay K Singh (Retd), a research fellow at the Military Affairs Centre in the Institute for Defence Studies and Analyses, New Delhi told Sputnik.

Experts say that instead of targeting a certain number of submarines, India should focus on developing the capability of the existing fleet.

"India's planning is focused on numbers till date and we have not achieved that so far. We should change the strategy now. Instead, every contract should be focused on capability development rather than numbers," Rear Admiral Rear Rahul K. Shrawat (retired) said.