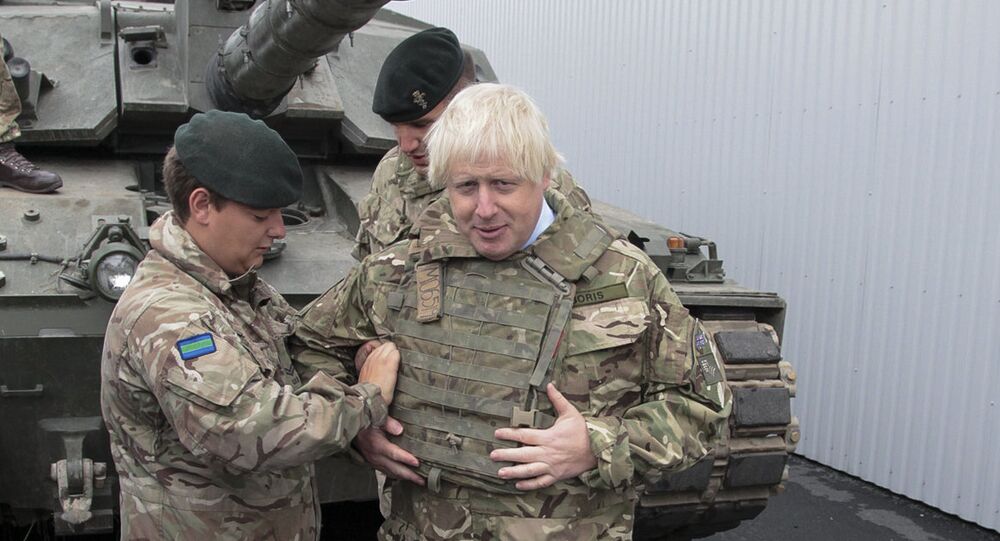 Rolling out his vision for the pathway of the UK foreign policy in the region, Foreign Secretary Boris Johnson exemplified some of the finest features of a British diplomat... albeit a Victorian one.

In his article for The Telegraph, the British Foreign Secretary absolved the UK of any blame for creating a number of crises that rocked the region, arguing that, if anything, Britain must intervene far more forcefully.

Setting out his foreign policy vision, Johnson said that Britain and the West must "collectively re-insert themselves" into the Middle East, and Syria in particular.

The reason for this age-tested (and counter-productive) solution is the spread of the "Islamist terrorist threat", which is "a scourge, a disease, a malaise."

"We need to confront it and wipe it out in all the ungoverned spaces where it breeds: in the Middle East and North Africa, in the foul rag and bone shop of the dark recesses of the internet, and in the wildest and least governed place of all, the human heart."

© AFP 2021 / Adrian Dennis
In the Shadow of Ignominy: UK Military Heads Back to Suez
The Foreign Secretary vehemently dismissed any idea that Britain may be actually complicit in the creation of the many Middle Eastern crises by toppling Iraqi leader Saddam Hussein and thus leaving the power vacuum for the Daesh (ISIS) or reaching a controversial arms deal Saudi Arabia amid its military campaign in Yemen.

"If we are going to win [against the "Islamist terrorism"], then we need to scrap the idea that Western foreign policy is somehow the principal cause of the problem," Johnson said.

"British foreign policy is not the problem; it is part of the solution."

Quite controversially, the UK's Secretary of State for Foreign Affairs argued that the Iraq War "did not create the Islamist terrorist threat: far from it." He even suggested that the Western intervention had helped to minimize it.

He cited the fact that the 9/11 terrorist attacks on the US (which had almost nothing to do with Baghdad) had preceded the 2003 invasion of Iraq by US-led forces as evidence that interventionism was working. The US-led invasion of the secular Arab nationalist country had resulted in the deaths of at least 112,667 civilians and the destruction of the Iraqi state, paving the way for Daesh Islamist extremists.

"It is almost as if people have forgotten that the 9/11 massacre — in which 3,000 died at the hands of Osama bin Laden — came before the Iraq war, not after it", Johnson said.

© AFP 2021 / Dan Kitwood / POOL
Chilcot Report Reveals US, UK Invade Nations in Old Colonial Way - Ex-US Army Officer
Fifteen of the 19 hijackers that took over 2,000 lives in the US in 2001 were citizens of Saudi Arabia, and the others were from the United Arab Emirates (2), Egypt, and Lebanon.

The Iraq War was started under a false assumption that Saddam Hussein possessed Weapons of Mass Destruction (WMDS), took the lives of some 179 British troops and jeopardized the country's influence in the region.

The Chilcot Inquiry, an independent investigation of Britain's role in the controversial conflict, found that the UK along with the US undermined the authority of the United Nations Security Council, acted on unverified intelligence and began an "unnecessary war."

The conflict also undermined the UK's international credibility, as the International Criminal Court (ICC) has recently opened its case against Britain for the alleged torture and unlawful killing of Iraqi civilians and prisoners of war.

To be fair, the Foreign Secretary conceded that "the war in Iraq — certainly the absence of a plan — was a mistake."

Nevertheless, Johnson declared that what the Middle East needs now is some more good-old British interventionism.

"On the contrary, you could argue much more persuasively that the problems we are seeing today have been exacerbated not so much by Western meddling as by our aloofness," the Foreign Secretary proclaimed.

© REUTERS / Toby Melville
Boris Johnson Points 'No Doubt' Finger at Assad for April Sarin Attack Again
Johnson aimed his sights at Syria as the next "beneficiary" of British "help."

Taking full credit on behalf of the US-led coalition for destroying Daesh, which only managed to get a foothold in Syria due to the power vacuum in Iraq coupled with internal instability caused by the Western-backed Arab Spring, Johnson proclaimed that Syrian President Bashar al-Assad is the main culprit behind the conflict that has plagued his country for the past 6 years.

"He contributed to the very creation of Daesh," the Foreign Secretary argued before spewing unconfirmed allegation as evidence.

"He let their leaders out of jail and bought their oil. Until this year, he usually avoided fighting Daesh, reserving his most ruthless aggression for the civilian population of Syria."

But thanks to the UK, which "has been the second biggest contributor to a highly successful campaign of tactical air bombardment, second only to the US," Syria was sparred.

This does not necessarily mean the end of British interference into the affairs of another country, as Johnson begrudgingly noted that "Assad has meanwhile recovered most of operational Syria."

The Foreign Secretary blasted the 2013 decision of Conservative Government to abstain from bombing the Syrian government forces that bore the brunt of the Daesh assaults.

"We called on Assad to go. We set the red lines of what we would accept in his treatment of the Syrian population. And then we did nothing about it."

© AP Photo / Hassan Ammar
Russia, Turkey, Iran Statement Lays Ground for Political Settlement in Syria
"I am afraid that we must now adjust to reality, accept that our policy has not succeeded, to put it charitably…" Johnson said.

The Foreign Secretary ignored the political and humanitarian efforts launched by Turkey, Russia and Iran that reached an agreement to create Syrian People's Congress and begin the national reconciliation process in Syria.