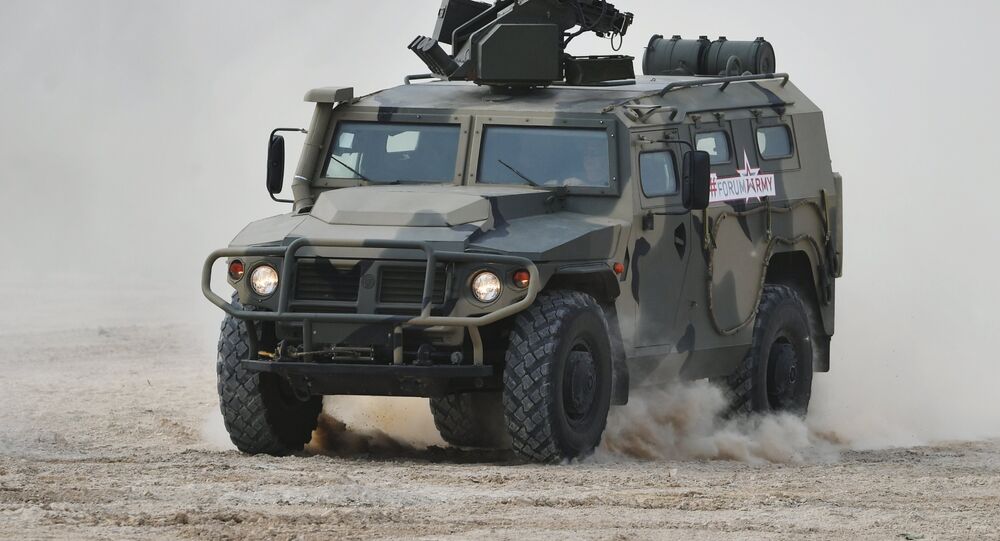 Hundreds of changes have been made to the design of the armored vehicle over recent years, including to its armored protection and technical capabilities. Tigr vehicles are widely used with the Russian military and in a dozen foreign countries.

The CEO of Russia’s Military Industrial Company LCC (VPK) has shed light on the modernized capabilities of the Tigr armored military vehicle and its advantages over its rivals.

"Over 700 upgrades have been made to the Tigr over the past three years. They were at increasing the vehicle’s technical specs and tactic capabilities. As a result, we have a simple and reliable vehicle, which is also relatively low-cost," Alexander Krasovitsky said in an interview with RT.

The Tigr infantry mobility vehicle was developed by the GAZ Group 10 years ago. Roughly 250 engineers are currently involved in the modernization of the vehicle.

"The Tigr is an armored combat vehicle and it is manufactured in multiple variants and with different level of armored protection. In particular, we have vehicles with class 5 protection. They can withstand a hit from an AK-47 with a steel thermo-cased core bullet. This is a serious test not only for a vehicle’s armor, but also for its glass, junctions and other elements," Krasovitsky pointed out.

The vehicle has an operation range of 1,000 kilometers and can reach speeds of up to 155 kilometers per hour. Krasovitsky underscored that the Tigr also has outstanding off-road capabilities.

Krasovitsky also noted that Tigr vehicles are easygoing regarding fuel.

"The Tigr is 'omnivorous.' The vehicle is powered by a multi-fuel engine which can work on any kind of fuel, including gasoline, diesel, kerosene or a mixture of them," he said.

The Gaz-2330 Tigr (Russian for "Tiger") is a family of Russian off-road vehicles, developed in the early 2000s and put into production in early 2004 at the Arzamas Machinery Plant, part of the Military Industrial Company. The vehicle is produced in a variety of configurations and is available for both civilian and military use.

The vehicle’s modular structure basically allows for a variety of modifications, be it a command vehicle or an anti-tank weapons platform. The vehicle can navigate virtually any type of rough terrain and can be equipped with a vast assortment of weapons, ranging from high-caliber machine guns to anti-tank rocket launchers.

In February, the vehicle’s developer, the Military Industrial Company, announced that it was working on an unmanned version of the Tigr equipped with a 20-millimeter automatic gun.