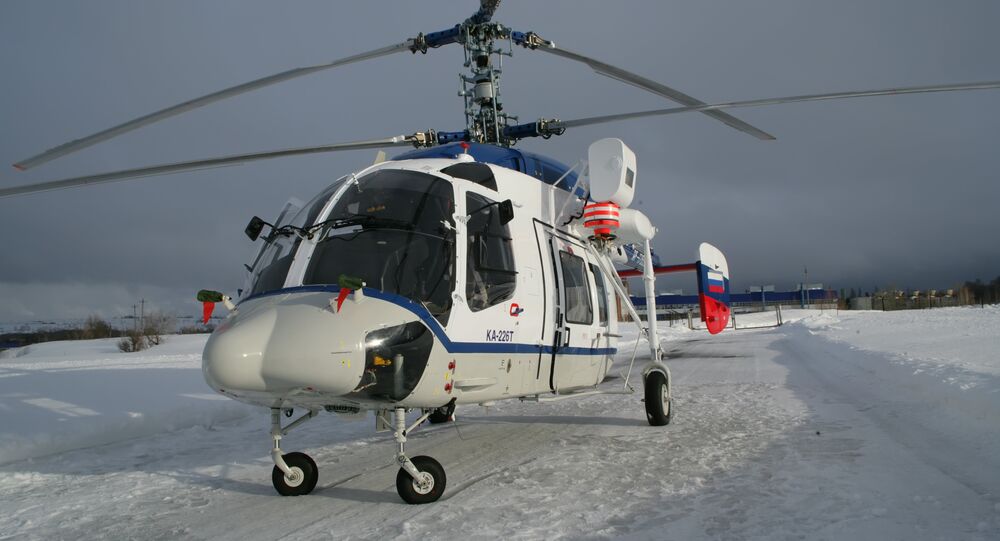 Sputnik gives you insight into the multirole Ka-226T, detailed as never before, shedding light on Russian helicopters’ near future and takes you a bit farther than Lake Baikal in frosty Siberia. Find out why.

Russia has come ever closer to churning out of the world’s first modular helicopter entirely created by digital 3D technologies, the much expected Ka-226T. The aircraft is poised to add new kudos and global recognition to the renowned family of the Kamov bureau’s unsurpassed multipurpose “trusty beasts.”

“We are creating a vehicle capable of responding to the most demanding requirements of the customer,” JSC Kamov General Designer Sergei Mikheev said about the vehicle, underscoring that the aircraft “inherits the tried-and-true functional platform created for many years to come,” so efficiently embodied in the earlier Ka-26, Ka-126 and Ka-226 machines.

© Flickr / José Luis Celada Euba
Russia's Ka-226T Helicopters to Get Crash-Resistant Fuel Systems
Imagine you could turn your car into a powerful off-roader or a fancy Formula-1 racer or even a presidential limousine by replacing a couple of details within 40 minutes. Sounds cool? That’s the way the Ka-226T is designed.

Its modular construction principle means that the basic “flying chassis” vehicle is adjusted for specific needs by adding special components, which make it a strong player in the following fields:

•    personnel and cargo transportation by means of an internal or external sling;

By default, the helicopter is augmented with a medical module, allowing it to be used for transportation and administering aid to persons in need. But within some 30 or 40 minutes it can be replaced with equipment for cargo delivery, Kamov’s Pavel Kalinin said while demonstrating one of the helicopters to journalists.

“The modular construction provides great commercial savings for the customer who purchases the platform. The single platform provides the opportunity to engage in businesses and make more money. It is actually one platform and several helicopters,” explained Dmitry Shvets, the Ka-226T program director.

He specified that the helicopter could be weaponized but such an option would require the approval of Russia’s state arms trader, Rosoboronexport.

The multi-functionality feature of the chopper does not in any way adversely affect quality and performance when they are combined by Kamov, and this principle works well beyond the unparalleled Ka-52 scout and attack aircraft. The Ka-226T boasts Kamov’s signature coaxial system of rotor blades made from composite materials, which are “a unique know-how in the world and provide the best aerodynamic characteristics,” Mikheev emphasized.

READ MORE: Ka-226 May Serve as Base for 1st Russian Unmanned Helicopter

The coaxial scheme enables easy piloting and advanced maneuvering, scraps the tail rotor as unnecessary and therefore increases safety, and also makes the helicopter more compact in comparison with analogues that possess a tail rotor. In addition, the rotor blades are foldable, which also saves space, adds to maintenance, and gives the vehicle a shipborne option.

“Imagine 18 meter-per-second gusts of wind. While single-rotor helicopters cannot operate in such conditions, they pose absolutely no obstacle for the Ka-226T, which has been proven by numerous tests and competitions,” Kalinin said adding that “all pilots from single-rotor machines can easily fly the new Russian chopper.”

© Sputnik / Pavel Lisitsyn
Russian Helicopters Company Set to Roll Out Two High-Speed Copter Concepts
He echoed Mikheev who had pointed out that “the cockpit with wide windows provides an excellent view and the helicopter can handle critical mistakes in piloting” – that is why such machines are used to train Ka-52 pilots.

So the helicopter’s controllability, combined with its outstanding maximum rate of climb (11m/s), service ceiling (6,500 meters), the skill of operating in temperatures ranging from —50°C to 50°C and a host of other features make it “indispensable for tackling the outcomes of natural and technogenic disasters,” Shvets outlined. The durable and compact Ka-226T is ready for missions in adverse weather conditions, densely built-up urban areas, mountainous terrain and does not require hangar storage.

The Ka-226T was designed and manufactured from scratch without the use of any documents on paper. All calculations before actual physical assembly were conducted via digital 3D modelling.

According to Dmitry Shvets, this approach considerably saves the designers’ time, while Oleg Zheltov, the Head of the Kamov Development Design Bureau, paid attention to the fact that “at the very early stages of design we are able to identify faults, mistakes and inconsistencies that, if we didn’t follow the digital path, would appear only at the final stages of production. It concerns aerodynamics, durability. The digital principle cuts down technical risks which could affect the dateline of the contract implementation.”

Zheltov told Sputnik that the Ka-226T “signals a new stage” in Russian helicopter development because from this vehicle forward, all choppers will be completely designed in the digital universe from A to Z.

For better coordination, all parties involved in the development process are connected by a videolink. This was demonstrated by watching the office of the Ulan-Ude Aviation Plant, where the Ka-226Ts are to be assembled, from the Kamov factory in the Moscow Region.

“The digitalization has reduced the machine development time, and, through the creation of 3D models, has improved accuracy of the component parts and units of the helicopter development,” Russian Helicopters CEO Andrei Boginsky said. That has helped to create a modern and high quality machine, whose performance is substantially superior to Western counterparts."

Aside from this, the customers of the Ka-226T helicopters, including  India, China, Iran, Mexico, Egypt and others, are expected to join the newly established 24/7 technical support and customer service program TeMPo, launched in October and currently working with the owners of the Ansat and Ka-32 choppers.

Within the framework of intergovernmental agreements, Moscow takes upon itself the responsibility of localizing helicopter production in the customers’ countries. Within the next five years, India is set to receive 200 Ka-226T machines, with 40 coming from Russia. A corresponding contract is to be signed during the first quarter of 2018, according to Boginsky.

The Russian Helicopters CEO added that Moscow is also going to participate in the Indian Defense Ministry’s new separate tender for 100 helicopters for the Navy, and the “competitive” Ka-226T has good chances to win, as from the technological point of view “there is no alternative” to it.

The production of the Ka-226T corresponds to the Russian Helicopters’ strategy, which CEO Boginsky categorized as following:

•    increasing the export share of choppers for the civilian market;

•    development of after-sales maintenance and service;

The holding aspires to equalize the ratio between the sales of military and civilian vehicles, which currently stands at 7 to 3.

In the near future, the Russian Helicopters is planning to invest into the development of the Ka-62 and Mi-38 helicopters, which reflects the company’s principle of fairly supporting and promoting both the Kamov and the Mil.

The plant was established in 1939 in the Soviet Union’s Siberian hinterland as a strategic asset which had to be kept away from the reach of an enemy. The factory was Russia’s first to manufacture both planes and helicopters simultaneously.

“We had the following principle in the Soviet Union: one day – one helicopter, and one week – one plane,” Chief Engineer Sergei Solomin told Sputnik, adding that now “the plant is capable of keeping up to the pattern but in reality its work is based on customers’ orders.”

The plant’s workshops are equipped with domestic and foreign machines, such as STAN and SIGAS, and DMG MORI respectively.

“We are in the constant process of upgrading [the plant]. We are investing billions [into it],” Solomin said, noting that environmentally-friendly methods are taken into account.

The plant has received the digital technology for the Ka-226T production. The assembly equipment for the helicopter will be manufactured and installed with the help of a laser tracker. Using modern machines with digital program management will allow for the minimization of manual labor connected with the adjustment of details.

“The factory is operating at full capacity,” its CEO Leonid Belykh said underscoring that the digitalization has not led to workers’ layoff: a human is indispensable in the creation of helicopters.

The factory is toiling over 12 modifications of helicopters, with the Mi-171A2 (a deeply modernized Mi-8 transport vehicle) as its priority, which is also being created with the intensive use of digital modelling. The production of the Ka-226Tis to kick off soon.

Sputnik was fortunate to capture the gracious snow-defying flight of a Mi-171E, an export version, whose "equipment including a new carrier system allowing it to increase maximum speed, increase  flight range and external sling payload, and to make flights in the thin air of high altitudes and in high temperatures more reliable. Also, the new form of tail and main rotor blades makes it possible to significantly reduce the noise level. We hope that the modernized helicopter will appeal to both traditional buyers and new clients," according to Belykh.

The UUAP is a good example of the innovative approach cherished by the Russian Helicopters.

Apart from introducing the 3Dmodelling manifested in the plant, the holding cooperates with the country’s best higher educational institutions and seeks solutions in different spheres.

“We have a program to use supercomputer calculations to cut down the time of experiments. Bionic design optimizes our solutions, cuts down the weight, increases the reliability and durability of details,” Boginsky specified in response to Sputnik’s question.