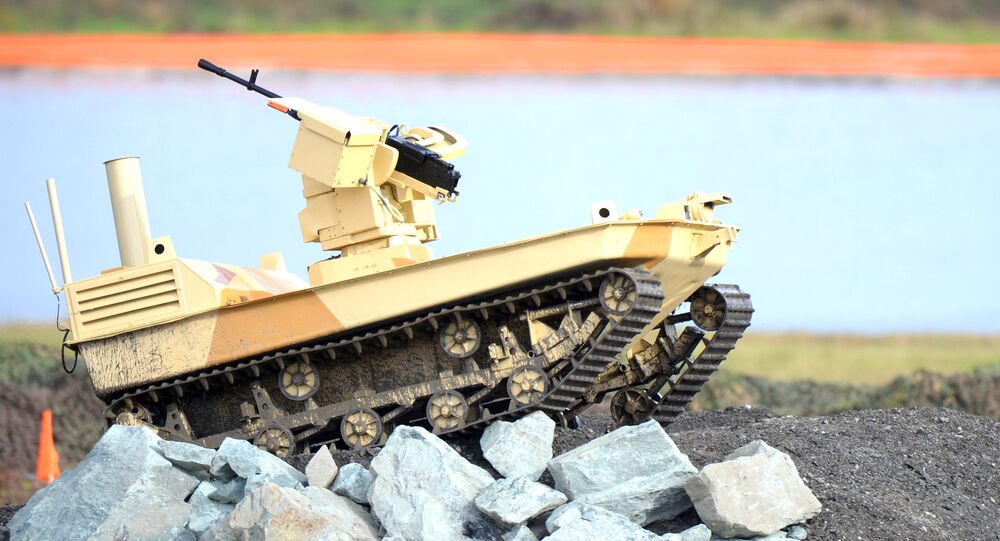 Dmitry Ostapchuk, CEO of Russian military manufacturer JSC 766 UPTK, which produces the Uran robotic system, dismissed the possibility of the rise of the machines as well as spoke about Russia's successes and prospects in the robotics industry, in an interview with Sputnik.

Russian Military robots are manufactured in a way that it is up to an operator to make a final decision to hit the target, that is why robots cannot revolt against people, according to Dmitry Ostapchuk.

"The decision over target engagement is left to a person and I think it will be this way for many years to come. However, I do not believe that handing this function to a machine means opening a Pandora's box," the CEO added.

He also noted that "cases of robots' revolts when errors in software result in robots posing a threat for people are common among other countries which develop robotic systems," whereas the Uran family of military robots are equipped with a large number of safety-locks, since Russia fully understands the danger of such situations.

Ostapchuk's statement comes amid various initiatives of the international community that envisages banning the research and development of military robots.

According to Dmitry Ostapchuk, these initiatives are "artificially" aimed at hindering the technological development of Russia, which is the current front-runner in this field.

In this context the CEO pointed out a recent surge of discussions about prohibiting military robots, as earlier in November, 125 nations that are part of the UN Convention on Conventional Weapons (CCW) agreed at an annual meeting to continue talks, which started in 2014, on addressing concerns over the use of Lethal Autonomous Weapons Systems (LAWS), also referred to as killer robots, which select and engage targets without meaningful human control.

Russia Five Years Ahead of Competitors

The developer stated that Russia is in the leading position worldwide in terms of creating tactical combat robots weighing from 5 to 30 tonnes.

"According to expert estimates, two years ago, our closest competitors were estimated to be 15-17 years behind. Today they have managed to close the gap to five years, which is significant," Ostapchuk said.

© Photo : YouTube/ Russian Defence Ministry
Russia to Showcase Brand New Military Robots at ARMY-2017 Forum in August
The CEO mentioned how in 2017 UK-based BAE Systems resumed its program to robotize the Black Knight light tank, and that this was an example of one of the most promising foreign projects in the field of combat robotics. The tank's tactical and technical characteristics are comparable to those of Russia's Uran-9 tracked unmanned combat ground vehicle developed and produced by JSC 766 UPTK.

At the same time, Ostapchuk stressed that the UK company has only just submitted a model of its robot tank, while the Uran-9 has been in production for the past few years.

"Why do we focus on this class of robots? We are talking about the so-called class of tactical link and linear combat units, primarily at the level of the platoon, the troop. If we compare it with manned combat equipment, then our machines can be compared to the class of armored infantry vehicles, that is, the most popular type of ground weapons today," Ostapchuk explained.

The developer added that while weighing 11 tonnes, the Uran-9 robot system is compact, half the size of an infantry fighting vehicle. At the same time, it surpasses the armored vehicles of this class in terms of weapons and combat capabilities.

© Sputnik / Michael Klimentyev
Space Railgun and Robot-Avatar: Russian Military Steps Into Sci-Fi Territory
"There is a criterion which roughly determines the speed of 'soldier reproduction.' It stands at nine months plus 18 years, as well as at least one year of professional training. This is an inexcusably long time frame when [the army is suffering] large-scale casualties. During peacetime, it would take only two months to manufacture a robot. In the case of a war, it will take several days — such technologies have already been developed," Ostapchuk said.

Speaking about other benefits of combat robots over soldiers, Ostapchuk noted that robots were not able to feel fear, which has the potential to significantly decrease human combat readiness and functional capabilities in a combat zone.

Technologies Embedded in Russian Uran Robots Are Impossible to Copy

In answer to the question whether Ostapchuk's company had concerns that countries, purchasing Uran robots, might copy its technologies and manufacture their own robots using the software, the developer siad that "we [Russia] are not afraid of anyone seeing some widely-known microchip [in our robots], because it is not possible to extract what is uploaded onto it."

During the Special Operations Forces Exhibition and Conference (SOFEX) in Jordan in 2016, Valery Varlamov, the head of Russian arms exporter Rosoboronexport’s security department, said that the organization had begun internationally promoting the Uran-6 mine-clearing robot, which proved to be effective during the operation in the ancient Syrian city of Palmyra. At the same time, the company was preparing export descriptions for the robot's battle version, Uran-9, and fire-fighting version, Uran-14, Varlamov said.

A number of countries have expressed interest in purchasing 766 UPTK's products, since no other country in the world has yet created tactical robots, weighting from 5 to 30 tonnes, of this level, Ostapchuk pointed out.

766 UPTK was established in 2013. The organization specializes in the development of robotic systems for various purposes. One of the company's most advanced developments are its Uran-series robots, which were used in the counterterrorism operation in Syria. The company is fully owned by the Russian Defense Ministry.