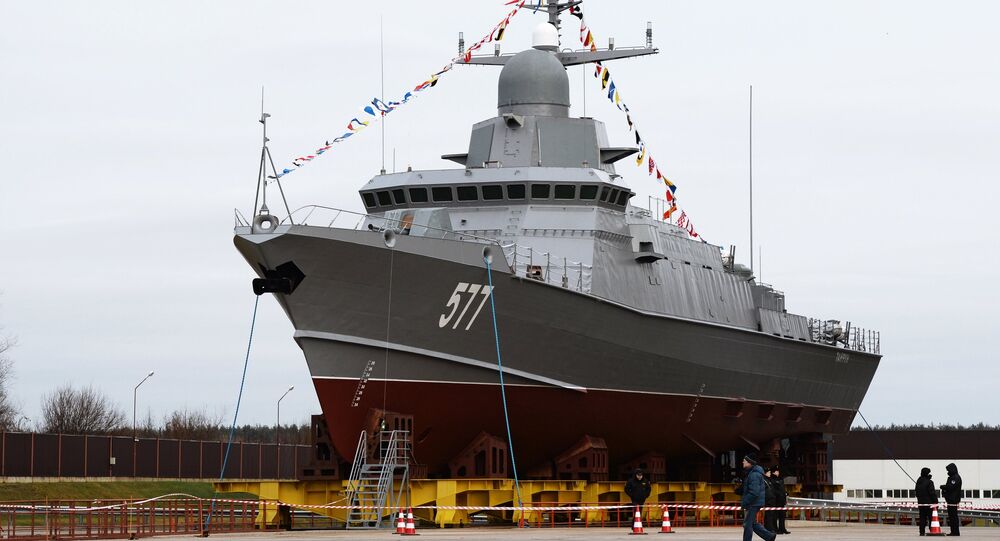 The fastness of a destroyer, the size of a cruiser and the stealth nature of a submarine – this is what Russia’s Karakurt-class small-size missile corvettes pack. On Friday, the Taifun, the second ship of its class, was floated out in St. Petersburg.

The Russian Navy expects to receive 18 Karakurt-class corvettes (project 22800) by 2020, building a small squadron with each of its fleets. The flagship, Uragan, was commissioned earlier this year, in July.

Not a Matter of Size

The Uragan and the Taifun bear the legacy of the small missile-carrying corvettes of project 21631 Buyan-M which are currently in service with the Russian Baltic Fleet and the Caspian Flotilla. Initially, they were designed for the littoral zone, but their combat use, including Kalibr missile strikes on terrorist targets in Syria, proved they are more than meets the eyes.

Their combat use, at the same time, exposed a series of disadvantages to the Buyan-M class ships, including insufficient air-defense capabilities, difficulties while operating in the open ocean and a sea endurance of only 10 days, which is not enough for a distant voyage.

As for the Karakurt-class corvettes, they are free from those shortcomings. With a displacement of nearly 800 tons (less than that of a Buyan-M corvette), they have a sea endurance of up to 15 days and are designed for better performance in the open ocean. They are also built with  stealth technology, which, taking into account their relatively small size, make the corvettes a hard target even for the most advanced anti-ship missile of a potential enemy.

The Karakurt-class ships are also well protected against aerial threats. While the first two ships are equipped with the AK-630M anti-aircraft artillery system, the rest will have the Pantsir-M, a naval version of the Pantsir-S1 combined surface-to-air missile and anti-aircraft artillery system which is capable of destroying aerial targets at a distance of up to 20 kilometers.

The main advantage of the new ships is their missiles. Each of the Karakurt-class corvettes carries eight vertical launching systems for the P-800 Oniks anti-aircraft missiles and the Kalibr-NK cruise missiles, which can be used against ground targets.

The Oniks missile has an operational range of 500 kilometers and the Kalibr-NK can destroy a target at distance of up to 2,500 kilometers.

A Karakurt corvette can reach speeds of up to 30 knots (55.6 kilometers/hour), which allows it to  quickly leave the launching area after firing a ship’s entire missile arsenal.

According to information from open sources, the project 22800 ships should also be equipped with the Sigma-E combat system, the Trassa-E automatic data exchanging complex and four different types of radio-radars.

The combat tactics of the Karakurts are determined by the ships’ technical specifications and design features. They are small, powerful and stealthy and can form a small fleet that would be able to come close to an enemy, deliver a missile strike and immediately leave the area, which is called the "hit and run" tactic.

In terms of striking power, the new missile corvettes can hold a candle to a larger ship of a potential enemy. For example, a Ticonderoga-class cruiser of the US Navy has a displacement of 9,800 tons and carries 26 Tomahawk cruise missiles with an operational range of up to 2,500 kilometers.

At the same time, a group of three Karakurt corvettes can deliver a strike with a total of 24 Kalibr missiles at the same distance. What is noteworthy is that the cost of a Ticonderoga-class cruiser is nearly $1 billion, which would be enough to build some 30 ships from project 22800.

The development of the Karakurt project is part of the trend within the Russian Navy to increase the number of small but mighty ships, and it has already attracted the attention of Western military analysts.

In 2015, military and defense expert Dave Majumdar wrote for The National Interest, "The Buyan-M’s eight Kalibr missiles give it a heavier long-range punch than the U.S. Navy’s now-retired Oliver Hazard Perry-class frigate and certainly much more firepower than either version of the service’s Littoral Combat Ships (LCS)."

"Russia’s small corvettes pack a much stronger punch than the corvettes of other navies, being able to employ new, long-range, precision-guided Kalibr cruise missiles that are usually found on larger ships," a 2016 article in Forbes read.