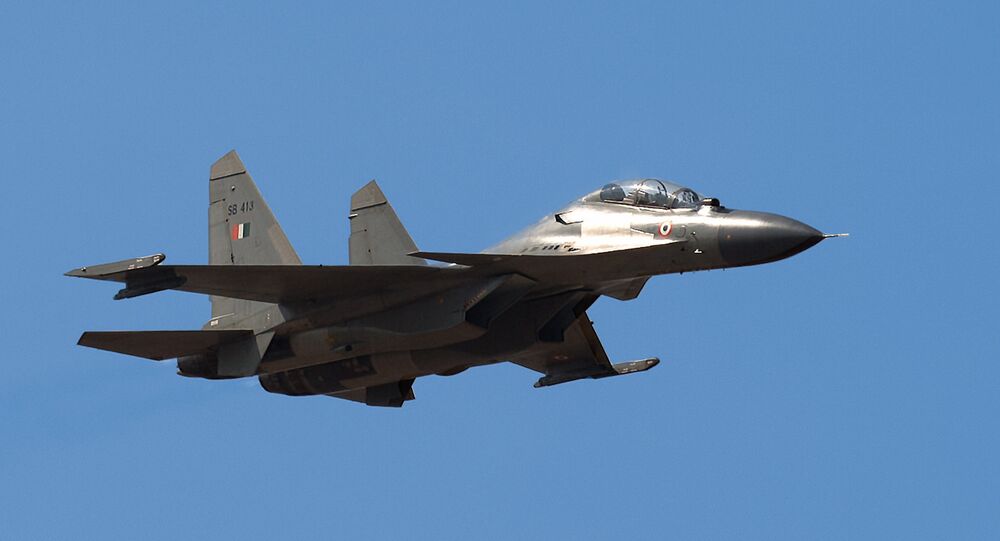 The first ever air-launched Brahmos missile has hit a target at a distance of 280 kilometers in the Bay of Bengal. The missile was dropped from the Su-30 jet's fuselage, and the two-stage missile’s engine fired up and propelled it straightway towards the intended target.

New Delhi (Sputnik) — With the successful flight test of world's fastest supersonic cruise missile BrahMos from the Indian Air Force's (IAF)  Sukhoi-30MKI frontline fighter aircraft, India has given a major boost to its air attack capabilities. The Indian Ministry of Defense has said that the successful maiden test firing of the BrahMos Air Launched Cruise Missile (ALCM) from a Su-30MKI will significantly bolster the IAF's air combat operations capability from stand-off ranges.

"A BrahMos ALCM weighing 2.5 tons is the heaviest weapon to be deployed on India's Su-30 fighter aircraft, modified by HAL to carry weapons. Brahmos, a world-class weapon with a multi-platform, multi-mission role is now capable of being launched from Land, Sea, and Air, completing the tactical cruise missile triad for India," India's Ministry of Defense said in a statement.

© CC BY-SA 3.0 / Mike1979 Russia / BrahMos missile
India to Put BrahMos Hypersonic Missile Into Service After Tests in Indian Ocean
The IAF has signed a contract for the delivery of air-launched BrahMos cruise missiles from January 2018. So far three Su-30 MKI jets have been modified to accommodate the new cruise missile and in total it will modify at least 50 Su-30MKI aircraft to carry the nuclear-capable cruise missiles. The IAF plans to induct at least 200 BrahMos-compatible fighter jets in the coming years.

India tested the land version of the BrahMos missile in April this year, when it hit a target at a distance of approximately 450 kilometers (280 miles) in the Bay of Bengal. The Indian Navy too is equipping all its ships with the BrahMos missile system. Russia supplies 65% of the BrahMos' components, including its ramjet engine and radar seeker.