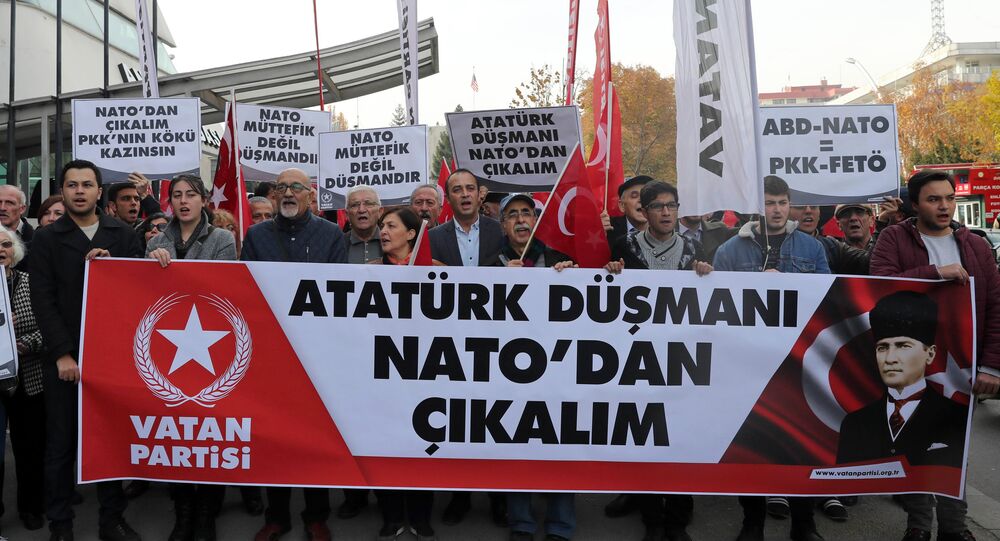 Following an incident, in which Turkey's President Recep Erdogan and the country's founding father Mustafa Ataturk were both portrayed as "enemies" during a NATO exercise in Norway, the alliance has taken disciplinary action against a Norwegian individual who allegedly caused the rift between the member states.

After Ankara withdrew its 40 troops from the NATO military exercise in the Norwegian city of Stavanger, NATO Secretary General Jens Stoltenberg apologized for the incident, ensuring that it did not reflect the official stance of the alliance.

In a telephone conversation with the Turkish leader, Stoltenberg said that disciplinary action had been taken against the civil counselor hired by the Norwegian army, who wasn't from within NATO. He also added that necessary procedures were put in place in order to prevent similar incidents from happening in the future.

© CC BY 2.0 / 7th Army Training Command / Norwegian soldiers
Cold War Shadow Over Norway Breeds Fears of New Arms Race
In one instance, an image of a statue of Ataturk was used to portray an enemy in the drills scenario. In the second incident, a chat account in Erdogan's name was opened as a collaborator with a "leader of an enemy state." Aftenposten columnist Harald Stanghelle called this move "purely amateurish."

This triggered an angry response from Erdogan, which risked deepening the rift between Ankara and its allies. With an active staff of over 600,000, Turkey has NATO's second-largest army after that of the US. Following the incident, Zafer Oguz, a retired Turkish army major, returned his NATO certificate and medal in protest.

Presidential Spokesman @ikalin1 said an incident during a recent NATO drill where the names of the Turkish Republic’s founder and current president were used in an “enemy chart” should be investigated carefully. https://t.co/83aLQX58sm pic.twitter.com/msydKqDwjU

​Norwegian Defense Minister Frank Bakke-Jensen told the Aftenposten daily that the Norwegian man, who had been hired to work in the execise headquarters, was removed from the drills. A defense source informed that the man had been engaged in several major drills before, where data-based simulation tools were also used. No further information was provided to avoid identification.

© REUTERS / NTB Scanpix/Ned Alley
Hang On...There's Not Enough Hangars to Go Around. Norway's F-35 Aircraft in Tents
Morten Myksvoll, the editor of the website tyrkiskpolitikk.no, suggested that while it was perfectly correct of Norway and NATO to apologize, Erdogan was likely to "milk the situation as much as possible" and use the episode to strengthen himself within Turkey.

Einar Wigen, a specialist in Turkish matters at the University of Oslo, called the incident "unusually stupid" and that it was only natural for Turkey to view it as great offence.

According to Atle Gerhard Stai, acting chief of the Defense Staff School and former chief of training at the Armed Forces Operational Headquarters (FOH), Preparing NATO exercises may take several years. Scenarios are designed in detail and feature ranging from government heads to ministers, opposition groups, and military capabilities. All bear fictional names, but the detailed descriptions of geography and roles make it easy to transfer the scenario to actual countries and individuals. The scenario used by the Joint Warfare Center described an area similar to the part of Europe from the Baltic States and northward.

The unprecedented (& little-documented) "Trident Javelin" incident is one of many entangled issues between @NATO & #Turkey as listed in this @HDNER article: #MDS, #F35, #S400s, #Interoperabilility.
Meanwhile it unites all politicians against the #West & fuels #Ankara's narrative https://t.co/XA3lmI5TLK

​The Trident Javelin Exercise was described as one of the most important in 20 years and Norway's largest in 2017. Its aim was to test NATO's new Joint Warfare Center at Jåttå near Stavanger and the ability to carry out large-scale joint warfare, including tackling cyber threats, as well as chemical and biological threats. It was also seen as a warm-up to the Trident Juncture exercise, set to be held in autumn 2018, when 35,000 soldiers from 30 countries will come to Norway.

Cutting Edge: Norwegian Army Has $5Mln of Earplugs That Make Your Ears Bleed