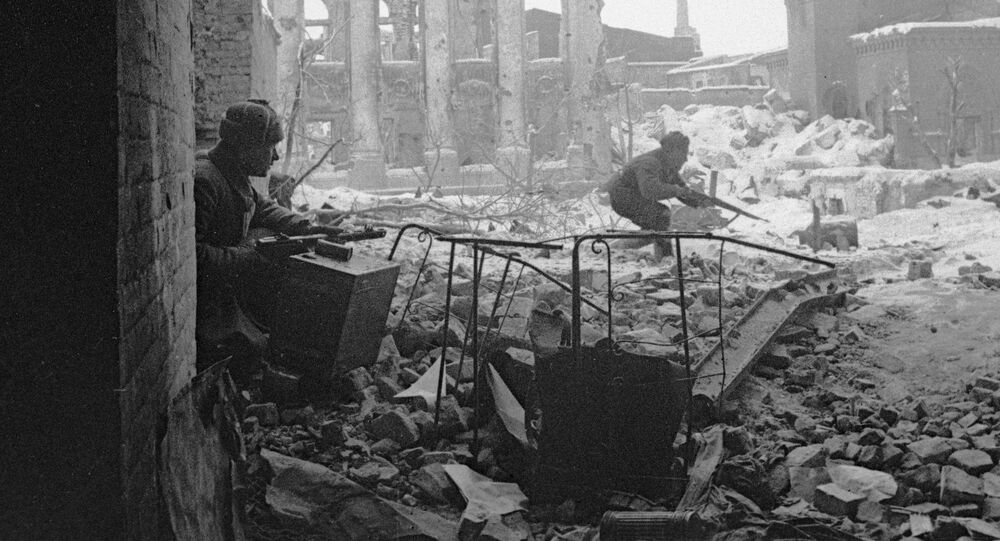 The Soviet WWII Counteroffensive That Changed the Course of History

Sunday marks the 75th anniversary of the beginning of the Soviet counteroffensive at Stalingrad, a dramatic battle that routed Axis armies and became the turning point in the war against the Nazis. Russian military journalist Andrei Stanavov looks back on the key events of the battle and its lessons.

Between late 1942 and early 1943, along the snow-covered steppes off the banks of the Volga River, the Nazi war machine suffered the most devastating defeat in its history – one from which it would never fully recover.

The Soviet counteroffensive around Stalingrad, known as 'Operatsiya Uran' (Operation Uranus) started on November 19, and continued until February 2, 1943. The daring operation, planned by Soviet High Command and executed by Generals Georgy Zhukov, Konstantin Rokossovsky, Alexander Vasilevsky and Nikolai Vatutin, culminated in the encirclement and liquidation of a 300,000+ Wehrmacht army group led by Field Marshal Friedrich Paulus and units from Germany's Axis partners.

The battle was preceded by the Nazi offensive into southern Russia and the Caucasus in the summer of 1942, during which Nazi Germany reached the zenith of its territorial gains following its invasion of the USSR. Among the goals of the operation was Stalingrad, the strategic industrial city on the Volga with the additional, symbolic importance of carrying the namesake of Soviet leader Josef Stalin, the commander in chief of the Red Army.

"Nevertheless," Russian military journalist and RIA Novosti contributor Andrei Stanavov recalled, "the enemy did not succeed in taking the embankment of the Volga and the city center, in spite of their fivefold superiority in numbers and firepower."

"Stalingrad is hell on earth – Verdun – beautiful Verdun, with new weapons. We attack on a daily basis. If in the morning we manage to advance 20 meters, in the evening the Russians throw us backward." This was how Wehrmacht private Walter Oppermann described the Stalingrad campaign, in a letter to his brother dated November 18, 1942, one day before the start of the Soviet counteroffensive.

Loathe to comparisons of Stalingrad to the bloody WWI meat grinder, Hitler demanded that his generals throw their battered units into Stalingrad again and again. The last push, which began in the fall and involved five infantry and two tank divisions, was halted by Vasily Chuikov's depleted and pocketed but defiant 62nd Army, which refused to give a single street, house, or room to the enemy without a fight.

"By mid-November, the Germans had been halted along the entire front and forced to switch to defense and entrenchment," Stanavov wrote. "In total, over 1,000 German tanks, 1,400 aircraft, 2,000 guns and mortars were lost, and 700,000 Wehrmacht soldiers and officers died or were wounded before the impenetrable walls of the city. Quickly assessing the situation, Soviet High Command decided not to give the enemy any time to rest, deciding instead on beginning a crushing counterblow."

© AP Photo /
German troops passing through a wrecked generating station in the factory district of Stalingrad on Dec. 28, 1942
© CC0 / Т-28
The Unbelievable True Story of a Lone Soviet Tank's Raid on Nazi-Occupied Minsk
With the Nazis bogged down in and around the city, the Red Army amassed a powerful grouping of forces from the South-Western, Don, Stalingrad and Voronezh fronts and concentrated them at Stalingrad, reinforcing them with mechanized units from the reserve. The group included more than a million troops, 15,000 guns and mortars, about 2,000 aircraft, and 1,500 tanks and self-propelled artillery pieces.

"By November 1942, from the operational point of view, the Wehrmacht was not in the most favorable position on the approaches to Stalingrad," the military journalist explained. "Focused on their assault, the Germans moved their best strike formations into the city, covering the flanks with weak Romanian and Italian divisions. It would be against them that the powerful dual blows from the Red Army forces in the South-Western and Stalingrad fronts would come. Soviet command chose the Serafimovich and Keltskaya areas as the bridgeheads for the assaults, as well as the Sarpinsky Lakes area, located to the south of the city."

On November 19, troops from the South-Western Front under the command of Colonel-General Vatutin and part of the Don Front started their offensive. Striking the Axis grouping in its left flank from the north in a lightening advance, the Red Army broke through the Romanian 3rd Army's defenses, driving enemy forces back 35 km. A day later, rifle divisions from the Stalingrad Front commanded by Colonel-General Andrei Yeremenko struck from the southeast, smashing the 4th Romanian Army and advancing 30 km, softening up enemy entrenchments with 80 minutes of concentrated artillery fire.

One German intelligence officer later recalled the impending disaster about to befall the Wehrmacht: "Stunned and confused, we did not take our eyes off the maps…Thick red lines and arrows indicated the directions of the multiple enemy attacks, flanking maneuvers, and areas where they had broken through. With all our foreboding, we could not even imagine the possibility of such a tremendous catastrophe!"

Consolidating its breakthroughs, the Red Army then began moving the breakthrough groups toward one another. On November 22, the Soviet 26th Tank Corps seized the bridge across the Don and took the town of Kalach –directly behind the German 6th Army and elements of the 4th Panzer Corps. In the space of a few days, the Red Army proceeded to create an iron ring around the 300,000-strong Axis force, including German, Romanian, Italian, Croatian and collaborationist units from the occupied Soviet territories, trapping 22 German divisions and over 160 individual units. By November 30, enemy attempts to break out of the encirclement were stopped.

Stanavov recalled: "The surrounded Axis troops occupied an area covering over 1,500 square km; the length of the perimeter of the pocket stretched 174 km…Deprived of food, ammunition, fuel and medicine, Field Marshal Paulus' soldiers and officers froze in —30 degree cold. Dying of hunger, they ate almost all of their horses, and hunted for dogs, cats and birds. Notwithstanding the obvious hopelessness of the situation, directives ordering them to 'fight to the end and not to surrender' continued to come from Berlin."

© Sputnik / Oleg Knorring
Fighting around Stalingrad, winter 1942/43
© CC0 / Surrender of Japan
VJ Day: Five Reasons Why Japan Never Attacked the Soviet Union During WWII
Starting in December, Hermann Hoth's 30-division-strong Army Group Don attempted to break through the ring in the area near the village of Kotelnikovo. They were met by the 122,000-troop-strong 2nd Guards Army commanded by Leiutenant General Rodion Malinovsky. In fierce battles, Hoth's tanks got bogged down along the Myshkova River, and the offensive was stopped. Field Marshal Erich von Manstein, the commander of the operation, asked the Fuhrer to allow Paulus to attempt to break through to meet Hoth, but Hitler refused, believing the Sixth Army could still hold on to Stalingrad.

During fighting between January and early February 1943, the Red Army's Don Front forces, commanded by General Konstantin Rokossovsky, gradually cut the encircled group up into several pieces and destroyed it. On January 31, Paulus and his command were captured, and promptly surrendered. Axis troops and officers surrendered in droves, notwithstanding orders from Berlin not to do so. The remainder of the 6th Army capitulated on February 2, 1943. An estimated 91,500 troops, including 2,500 officers and 24 generals were captured.

© Sputnik / Georgy Zelma
The last Nazi troops leaving liberated Stalingrad, 1943.
© Sputnik / Georgij Selma
'Stalingrad Remains Soviet': Secret Docs on the WWII-Changing Battle Released (PHOTOS)
For many years after the battle, Western historians accused the USSR of deliberately mistreating Axis prisoners of war. Soviet and Russian historians have gone on to counter the claims, pointing out that most of the enemy troops were taken into captivity after having been seriously weakened by the fighting and the ensuing three months of starvation while encircled.

In the first three months after their capture, the prisoner death rate at the specially organized Camp #108 outside Stalingrad's working settlement at Beketovka was extremely high, with around 27,000 POWs having reportedly died on the way to the camp or shortly after arriving. About 35,100 others underwent treatment at hospitals set up at the camp; another 28,100 were sent to hospitals at other locations. Only about 20,000 of the prisoners were deemed capable of labor, and were sent to do construction work. Following the terrible spike in mortality in the first three months, mortality rates for the troops captured at Stalingrad stabilized, and between July 1943 and January 1949, a total of 1,777 prisoners perished. With the exception of those troops and officers convicted of war crimes, the last POWs from the Battle of Stalingrad were released to Germany in 1949.

Stalingrad became the main turning point in the European Theater of World War II, and Nazi Germany's first major defeat following the air-based Battle of Britain in 1940. In 1943, after their defeat in the massive tank battles at Kursk, and the Allied invasion of Italy, the Nazis' total and unconditional capitulation became only a matter of time. Stalingrad was the first nail in that coffin.