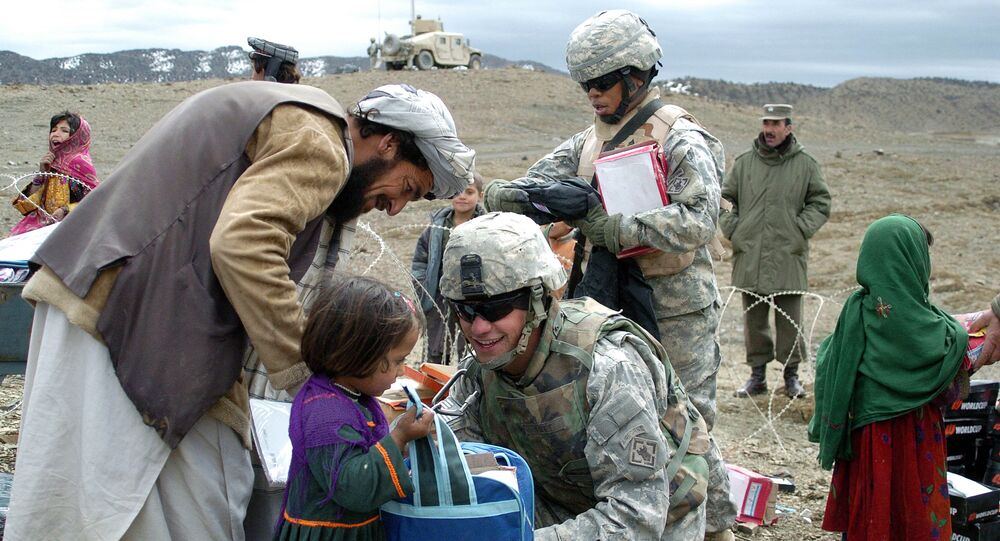 US soldiers were told that sex crimes against children are a "culturally accepted practice" in the country and that "nothing could be done about it," a report by the US Department of Defense's inspector general said.

American servicemen on a military mission in Afghanistan who tried to report cases of sexual child abuse to their superior officers were literally told to ignore such incidents, according to the findings.

According to the report, one of the interviewees said he knew of an Afghan commander using little boys for sexual purposes. He shared this information with his command, but the latter said that "there's nothing we can do about it," "it was out of our control," and "it's their country."

© AP Photo / David Guttenfelder
Pentagon Says All 3,000 US 'Uplift' Troops Now on Ground in Afghanistan
Several US news outlets reported in autumn 2015 that members of the Afghan National Defense and Security Forces (ANDSF) repeatedly committed sex crimes against children, particularly against young boys. Reports by the US Department of State (DOS) and the UN also confirmed that the sexual abuse of children is a widely spread practice throughout Afghanistan.

According to other media reports, as well as data from various human rights organizations, the local authorities, including police, were also involved in child sex abuse cases, and thus wouldn't do much in terms of investigating the incidents.

The crimes allegedly included rape, sex slavery, physical violence and a practice called "bacha bazi." The latter is a form of child sexual abuse widely prevalent in Afghanistan, when powerful local figures and businessmen sexually harass young boys who are trained to dance for them in female outfits at parties, according to the report.

When a party is over, boys are sometimes forced to go to hotels or private apartments where they are sexually abused. They are also used as bodyguards or house servants. Most of them are aged between 10 and 18.

© AFP 2020 / ROSLAN RAHMAN
10,000 Child Sex Abuse Victims Identified Via Interpol Database in Five Years
The US carried out military operations in Afghanistan between October 7, 2001, and December 31, 2014, with the support of its coalition partners in the framework of the International Security Assistance Forces (ISAF), led by NATO since 2003.

On January 1, 2015, after the US authorities decided to decrease the presence of American troops in the country, ISAF was transformed into a mission that is supposed to provide training and assistance to Afghan security forces and institutions.

A few years before being elected US president, Donald Trump advocated a complete withdrawal of US military forces from Afghanistan, making a corresponding statement on his Twitter account.

Why are we continuing to train these Afghanis who then shoot our soldiers in the back? Afghanistan is a complete waste. Time to come home!

However, in 2017 Trump completely changed his rhetoric, announcing a new strategy toward the country and supporting the idea of a US military presence there.

"America's enemies must never know our plans or believe they can wait us out. I will not say when we are going to attack, but attack we will," the US president said in summer 2017.

Sexual Harassment Within US Army

A separate Pentagon report depicts the scale of sexual harassment within the US armed forces, based on declassified data from 2013 to 2016.

It covers cases of sexual misconduct in the US ground, naval, air and marine forces and on bases all around the world.