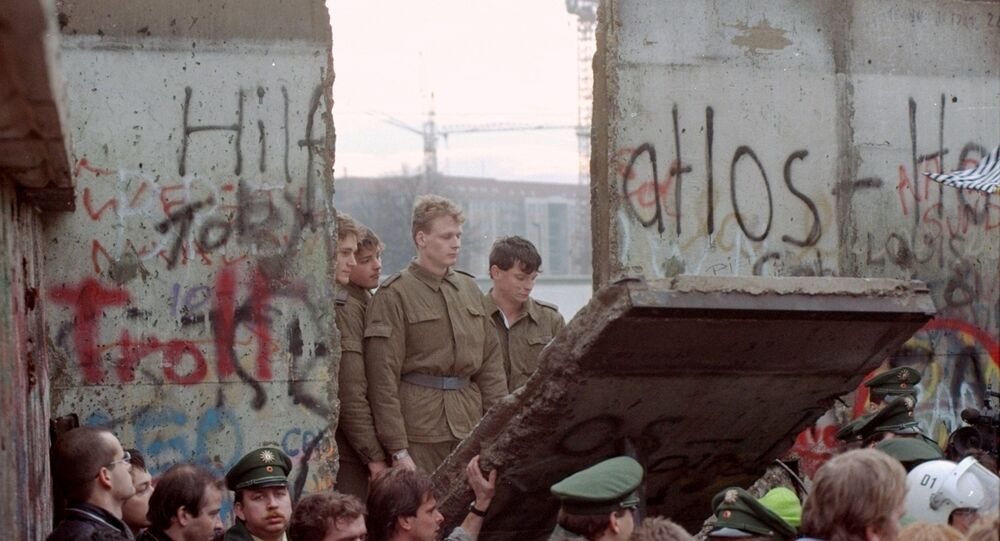 November 9, 2017 marks the 28th anniversary of the fall of the Berlin Wall. The event offered much hope for conciliation and compromise between Russia and the West, but agreements that NATO would not expand eastward in the Wall's wake were not adhered to.

On November 9, 1989 the Cold War was thawing in Europe, and Gunter Schabowski, the Socialist Unity Party of Germany's chief in East Berlin, sat down at a press conference to announce the lifting of travel restrictions between East and West Germany for certified asylum seekers in future.

Unprepared and poorly briefed, when asked by a journalist in attendance when the new regulations were to come in to effect, Schabowski dithered for a few moments, before saying "immediately, without delay."

By accident, the East German apparatchik had opened the floodgates of the Berlin Wall — an imposing 155-kilometer-long barrier forged of concrete and barbed wire that had split Germany's capital in half since August 13, 1961.

​Ecstatic crowds rushed to the wall from East and West alike, many armed with hammers and picks, others with beer and champagne, flooding through the checkpoints in both directions from midnight onwards.

Within two days, over two million East Berlins had crossed the threshold to participate in what one journalist called "the greatest street party in the history of the world."

In time, cranes and bulldozers arrived, again from both directions, to speed up the wall's dismantling. Once felled, Berlin was united for the first time since 1945.

Over the course of its 28-year lifespan, the Antifaschistischer Schutzwall (Berlin Wall) served a dual purpose — preventing Western elements from entering East Germany and undermining the socialist state, and stemming the tide of defections to the Federal Republic of Germany.

@SaraEisen Russian threats and aggression? Please note NATO expansion happened AFTER the promise in 1990 not to expand eastwards one inch pic.twitter.com/J0Z5qH2Okf

​While the former rationale, offered by GDR officials, was ridiculed by Western leaders — they claimed the structure was purely designed to keep residents from fleeing — the belief the Berlin Wall had a protective capacity was a very real one among the leadership not only of East Germany, but other Warsaw Pact nations, and the Soviet Union.

Despite fears the wall's destruction would precipitate Western military infiltration of Eastern Europe, Soviet leader Mikhail Gorbachev nonetheless refrained from dispatching any of the 24 Red Army divisions stationed in the GDR to quell the revolution unfolding.

He was assisted in his refusal by the conciliation of George H. W. Bush's administration, which immediately responded to the fall of the wall by initiating the December 1989 Malta Summit, and promising not to take advantage of the situation for its own ends.

At that summit, referred to by many historians as the most important since 1945, when UK Prime Minister Winston Churchill, Soviet Premier Joseph Stalin and US President Franklin D. Roosevelt agreed on a post-war plan for Europe at Yalta, Bush again spoke of realizing "a lasting peace" and transforming the East-West relationship to "one of enduring co-operation."

At the Malta Summit #OTD 1989 Soviet President Mikhail #Gorbachev and US President George Bush declare the #ColdWar officially over pic.twitter.com/Pmh2v7wPC9

​Not long after, James Baker, then-secretary of state, visited Moscow and informed Gorbachev the US wished for Germany to be reunified. In return for not opposing the move, Baker promised NATO would not expand "one inch eastwards" towards the Soviet Union's borders.

This pledge was subsequently reiterated by then-German Foreign Minister Hans-Dietrich Genscher, who said in a January 31, 1990 speech in Tutzing, Bavaria that there would not be "an expansion of NATO territory to the east, in other words, closer to the borders of the Soviet Union." In essence, the eastern half of Germany would not host NATO troops or facilities, and the door to the alliance would remain closed to the countries of Eastern Europe.

These apparent cast-iron promises would not endure long. In 1999, NATO very much began expanding eastwards, by a great many inches — three former Warsaw Pact countries (Hungary, the Czech Republic, and Poland) joined the alliance.

This enlargement was opposed at the time by George Kennan — formerly a committed "cold warrior" and a key figure in the creation of NATO — who predicted it would precipitate the start of a "new Cold War."

''I think the Russians will gradually react quite adversely and it will affect their policies. It's a tragic mistake. There was no reason for this whatsoever. No one was threatening anybody else. This expansion would make the Founding Fathers of this country turn over in their graves. Our differences in the Cold War were with the Soviet Communists. This has been my life, and it pains me to see it so screwed up in the end," Kennan said.

(For those interested in Kennan's views and his despair in expanding NATO leading to "inevitable reaction", see https://t.co/db0TWqjmH5)

​He added that there would "of course" be a bad reaction from Russia, and then "the NATO expanders will say we always told you that is how the Russians are — but this is just wrong.''

Kennan's warnings have been ignored ever since. Five years later, yet more former Warsaw Pact members, along with former states of the Soviet Union and Yugoslavia (Bulgaria, Estonia, Latvia, Lithuania, Romania, Slovakia, Slovenia) were admitted — and as of June 2017, NATO stands 13 members larger than it did in 1990, 10 of which formerly comprised the Warsaw Pact, and three of which formed part of the former Yugoslavia.