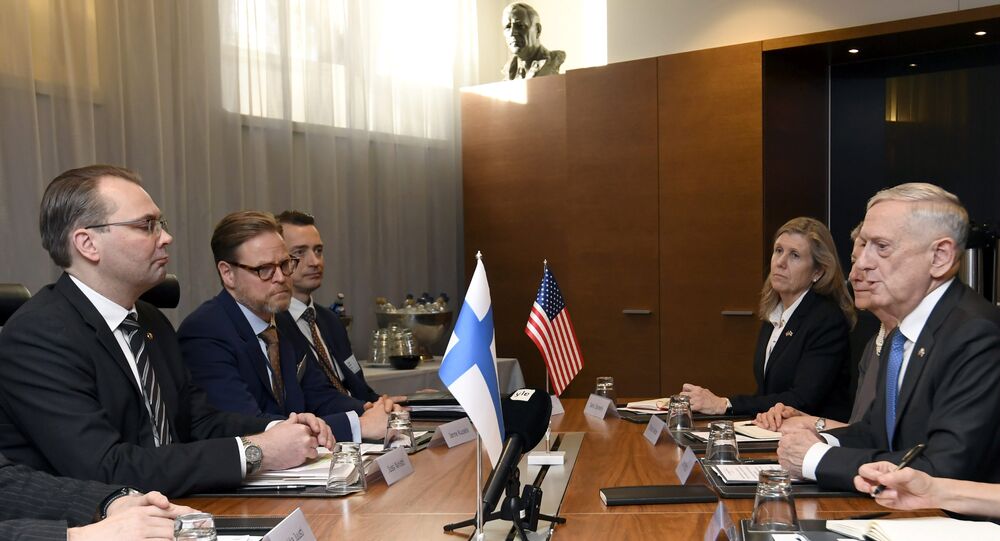 US Defense Secretary James Mattis has visited Scandinavia, where he has taken part in tripartite talks with his Nordic counterparts, which are expected to have far-reaching consequences for both Sweden and Finland.

Earlier this week, James Mattis visited Helsinki and held meetings with Finnish President Sauli Niinistö, announcing that relations between the US and Finland have "never been better."

Later, trilateral talks involving Finnish Defense Minister Jussi Niinistö and Swedish Defense Minister Peter Hultqvist were held for the first time. It is not yet clear whether it will become a regular event. Niinistö said a similar encounter is being planned for 2018.

© AFP 2020 / Jean-Christophe Verhaegen
Fall Freak-Out? Pro-NATO Rhetoric Skyrockets in Finland
Niinistö explained that the goal of this format was meant to supplement, rather than replace Finnish and Swedish bilateral relations with the United States, ensuring that no new alliance is being built, despite both Nordic nations' increased cooperation with the US, the Finnish national broadcaster Yle reported. Earlier this year, US tanks made their first appearance on Swedish soil during the Aurora 17 military drills, the country's largest in decades.

The Finnish Defense Minister also said that cooperation to combat hybrid warfare was one of the priority items on the agenda, given the Helsinki-based hybrid threat center, which commenced its operation earlier this autumn.

​Furthermore, Niinistö said he had extended an invitation to James Mattis to participate in the Nordic nation's main military drills to be held some time in 2020 or 2021. At a later conference, Niinistö told the US Defense Secretary that his country's participation would be "useful and welcome."

"We see the US presence in the Baltic area and the rest of Europe as a stabilizing factor," Jussi Niinistö said.

© REUTERS / Johan Ahlander
Sweden Beefs Up Draft Numbers to Plug Gaps in Army Staff
Mattis did not directly respond to Niinistö's invitation, yet congratulated Finland on its100th independence anniversary and lauded Finnish troops for their skill and work ethic.

The country is slated to go to the polls in late January 2018 and the NATO membership debate inevitably flares up in non-aligned Finland before every presidential election.

None of the current candidates support NATO membership except for Nils Torvalds of the Swedish People's Party, who polled a meager 1 percent in a recent survey by Yle. Finns' opposition to NATO remains stable, with opponents consistently polling over 50 percent in recent years.

Following the meeting with Mattis, Swedish Defense Minister Peter Hultqvist informed the parliamentary defense committee that the government had chosen the US missile system Patriot as a replacement for the current defense Robot System 97, which is largely outdated. Hultqvist explained that the Patriot was safest supply-wise and guaranteed Sweden against ballistic missile attacks, the Swedish daily Aftonbladet reported.

© CC0
'Russian Threat' Spurs Sweden Into Replacing Entire Air Defense System
The price tag, however, remains unknown. Nevertheless, it is beyond question that this will become one of the nation's most expensive defense acquisitions, if not the most expensive. The idea is to equip Sweden's two air defense battalions with Patriot missiles until 2025. Previously, the cost of firing ramps and management centers alone was estimated at SEK 12 billion ($1.5 billion). A single Patriot missile costs around $3 million.

Hultqvist himself admitted that there are concerns that the Patriot may become "the cuckoo in the nest" that replaces other defense efforts.

Swedish Defense Minister Peter Hultqvist also argued that the tripartite meeting sent a very important security policy message. He also called it "very natural," since both Finland and Sweden have similar defense cooperation agreements with the US.