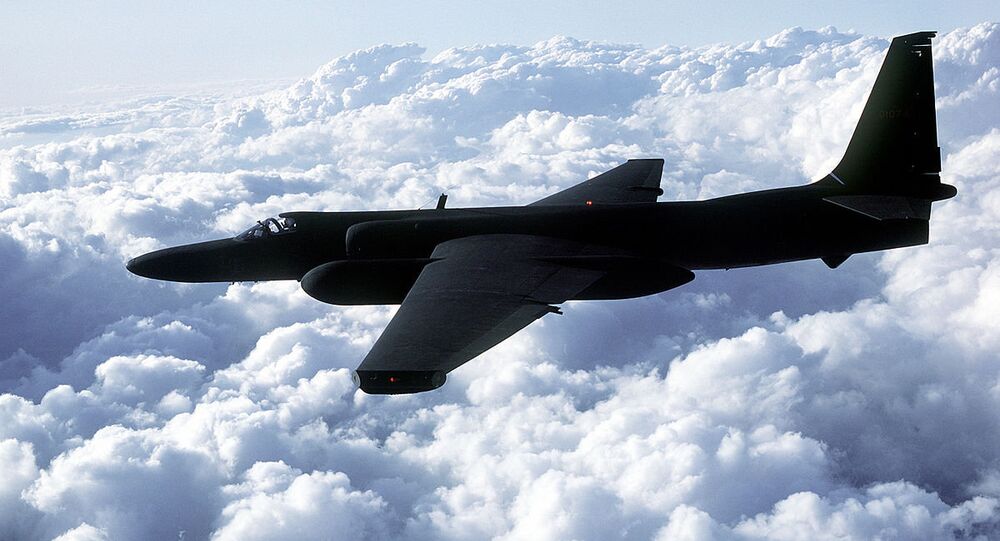 While the destruction of Francis Gary Powers' U-2 over Soviet airspace in 1960 is undoubtedly the best-known case in the secret Cold War air war over Soviet airspace between Soviet pilots and missile troops and USAF fighters, bombers and reconnaissance planes, it is by no means the only case. Sputnik recalls some of the other vivid examples.

The Russian Defense Ministry reported this week that 18 foreign planes and aerial vehicles were caught trying to engage in reconnaissance along Russia's borders, with fighters of the Aerospace Defense Forces scrambled eight times to intercept the potential intruders. No airspace violations were reported.

© AFP 2020 / YONHAP
Playing With (Nuclear) Fire: Why Renewal of B-52 On-Alert Status is So Dangerous
None of the interceptions led to any close calls. However, as RIA Novosti military observer Andrei Stanavov writes, one doesn't have to go back very far in history to discover that such operations to probe Russia's airspace defenses could lead to dangerous and even deadly consequences.

In the early Cold War, on July 29, 1953, a pair of MiG-17 fighters from the Soviet Pacific Fleet were scrambled following an alert that an unidentified aircraft had entered Soviet airspace over Ussuri Bay outside Vladivostok. Coming in for a closer look, the MiG pilots saw a large four-engined US bomber 10,000 meters above sea level, headed toward Askold Island, just outside the Russian Pacific Fleet's home base.

The USAF Boeing RB-50G Superfortress did not exchange any pleasantries with the MiGs, opening firing with its onboard cannons. One of the bursts hit the lead MiG, flown by 1st Lt. Alexander Rybakov, riddling it with bullets. Fortunately, despite the damage, the fighter managed to remain airborne.

© Sputnik / Yu. Kravchuck
A Mikoyan-Gurevich MiG-17 Fresco fighter takes off from an airfield

Realizing that the space for dialogue had run out, the MiGs returned fire. In a few minutes, the Boeing, breaking into pieces, crashed into the sea. In the catastrophe, only one of USAF plane's 18 crew, co-pilot John Ernst Roche, survived.

Two years later, in April 1955, another air battle broke out, again in the Far East, this time near Kamchatka. The US spy plane, a refitted RB-47E Stratojet, was destroyed following a short battle with a pair of MiG-15s. The plane's three crew were killed.

© CC0
Secret CIA Docs Reveal What Worried US Intel Most About Soviet Naval Capabilities
In May 1960, CIA pilot Francis Gary Powers rose to international fame when his U-2C reconnaissance aircraft was shot down, 21 kilometers above sea level and over two thousand kilometers deep into Soviet airspace, by an anti-aircraft missile. Less than a month before the fateful mission, Powers had snapped high-quality images of secret objects at the secret nuclear test site near Semipalatinsk, Kazakhstan. While Kazakhstan's fighter wings and air defense batteries proved no match for the cutting edge spy plane, the new missiles near Sverdlovsk wouldn't allow Powers to get away a second time.

Stanavov recalled the events of May 1, 1960: "The first S-75 Dvina missile roared into the sky at around nine in the morning, ripping off the U-2's tail. The carefully planned CIA plan, dubbed Operation Overflight, suffered an inglorious end. Credit must be given where credit is due – Powers, who saw his plane disintegrating around him, calmly waited to fall to a safe altitude before ejecting."

© RIA Novosti . Mikhail Ozerskiy
Soviet rendering of a Lockheed U-2

"The death of Snr Lt. Sergei Safronov, the MiG-19 pilot accidentally shot down by one of the missiles meant for Powers, was a black mark on the otherwise brilliant operation by the Soviet air defense troops. The second plane from the pair that took off to intercept Powers was also endangered, but managed to dodge the friendly fire at the last moment."

Amid the crisis, the US first denied violating Soviet airspace. However, fragments of the U-2 found on the ground, complete with pieces marked 'Made in the USA' presented by the Soviet side forced President Dwight D. Eisenhower to admit to the plane's existence and its mission.

The Powers case had serious political consequences, sharply exacerbating already tense relations between the superpowers. The important East-West summit in Paris, scheduled for mid-May, broke down, and Eisenhower canceled his visit to Moscow. The Soviet Supreme Court sentenced Powers to ten years in prison for espionage. In February 1962, he was exchanged for Soviet spy Rudolf Abel.

© AP Photo
Francis Gary Power during his trial in Moscow.

© AP Photo / Werner Kreusch
'You Can Only Die Once': Ex-US Cold War Spy Breaks His Silence (EXCLUSIVE)
Just two months following the Powers story, on July 1, 1960, a US Boeing B-47H Stratojet from the USAF's 55th Strategic Air Intelligence Wing violated the Norwegian-Soviet border. The plane was intercepted and destroyed by a MiG-19 flown by Lt Vasili Poliakov. Of the US plane's six crew members, two survived – copilot Bruce Olmstead and navigator John McKone. The two were taken prisoner, spending several months in a Soviet prison before being released in January 1961. A month after the incident, the Soviet side returned the remains of one of the crew members found in a search.

"Special attention is worth giving to a tragic episode involving an Iranian RF-4C Phantom II which invaded Soviet airspace in November 1973," Stanavov wrote. The fighter-bomber, which had an American copilot, "caused a real drama over the skies of Transcaucasia," the journalist recalled.

"The MiG-21SM sent to intercept the aircraft caught up with the intruder, and opened fire, shooting to kill, but none of the missiles hit their target. Then, the MiG's pilot, Captain Gennady Yeliseyev, took a step that was unprecedented in the history of supersonic jet aviation, turning his plane into a battering ram. The pilot did not manage to eject, unlike the crew of the Phantom, and perished in the crash. The Iranian plane's crew parachuted to the ground, were arrested and later released."