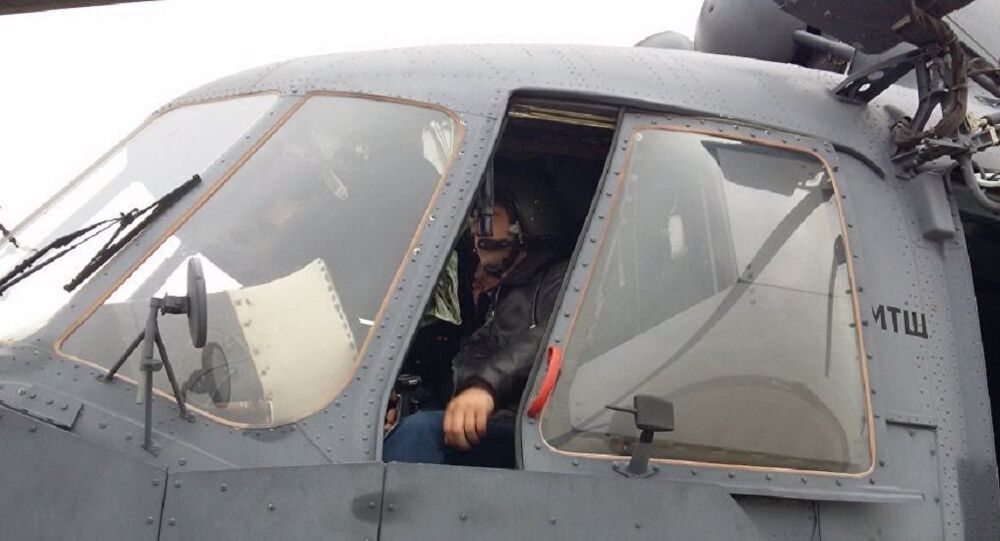 On Saturday, Russia's Army Aviation celebrates its professional holiday. In honor of the occasion, a journalist traveled to Russia's Rostov-on-Don to speak to chopper pilots from a brigade of the 4th Air and Air Defense Forces Army. She discovered that alongside their combat tasks, they engage in other, equally important and dangerous missions.

For the most part, the pilots' combat exploits remain a secret. However, its civilian missions, including putting out massive fires, like the one in the city of Rostov-on-Don earlier this year, are another story.

In time for Army Aviation Day, RIA Novosti correspondent Yulia Nasulina spoke to three pilots at a base in Rostov-On-Don, a major hub for Russia's Army Aviation forces.

'The Sky is Everything to Us'

All three men, it turned out, are 'hereditary pilots' – sons of fathers who also dedicated their lives to aviation.

"I've been flying practically since I was in diapers," helicopter commander Major Rudolf Kurganov joked. "We moved around from one place to another…Then my father started taking me on flights with him, and by tenth grade I was flying myself."

© Sputnik / Nikolay Hiznyak
Largest Ever Army Airborne Tactical Drills to Complete in Russia (VIDEO)
At first, the pilots said, flying brings with it an intense adrenaline rush. With time this passes, but interest in the work remains, and it gets to the point where you cannot live without flying. "Aren't you afraid of flying?" Nasulina asked each of the pilots. The response was the same every time – a smile appearing on their faces and a shaking head 'no' gesture.

"Yes, anything can happen. One time, my helicopter just…got tired," pilot Major Victor Derun said. He couldn't disclose the details, saying only that his survival was a miracle.

The list of missions Army Aviation is tasked with carrying out is long. For instance, Mi-28N Night Hunters based at Rostov-on-Don have been used to smash Daesh militants in Syria, and in other hotspots. Their Mi-8 AMTSh Terminator assault chopper cousins, meanwhile, are tasked with transporting men and materiel, debarking assault troops, transporting senior command staff, conducting search operations and assisting in other emergency situations.

"I took part in the peace-making operation in the Chechen Republic, and in the Georgian conflict in Abkhazia in 2008," Kurganov said, keeping his lips sealed about the details.

Army Aviation's broad range of possible missions means continuous and strenuous training. Having passed one set of exercises and increased their flight hours, pilots are given more and more difficult tasks. Among them is the ability to use their choppers as a tool to fight fires.

'Your Helicopter as a Single Organism'

Captain-navigator Sergei Starukhin, another serviceman with the 4th Air and Air Defense Forces Army, took part in an operation to extinguish a major forest fire in Rostov-on-Don region's Usto-Donetsk area in late August. The fire, which covered about 5,000 hectares and began to affect houses in a neighboring settlement, attracted the attention of the military, who were called to help.

© Sputnik / Ruslan Krivobok
Glorious Wings: the Very Best of the Tupolev Bomber Aircraft
"We broadcast from the air by radio about where the new hot points were emerging, while the controller from the ground coordinated who extinguished what and where," Starukhin recalled. The mission, which included extinguishing the fire with chopper-dropped payloads of water, was complicated by the fact that the settlement was located in lowlands, forcing pilots to decline to tree level, dump their water, and regain altitude.

Shortly after extinguishing that blaze, another fire, one of the largest in recent memory, broke out in a residential area in Rostov-on-Don's historic center.

"The fire at Teatralniy Spusk was the most difficult," Kurganov, who also participated in the mission, recalled. "There's a port there with large cranes nearby, tall buildings, all sorts of poles and wires that we had to be careful not to hook."

The mission was complicated by the 28 meter-long cable attached to the water container. Strong winds, a great deal of smoke, and extreme temperatures escalated risks further. A helicopter's engine requires oxygen to work, while flames rising high into the sky consume it. To complicate things, the military firefighters had to work fast, or risk the fire spreading further.

"We took water from the Don River and dumped it on the epicenters. From one place to the other took 3 minutes. Altogether we dumped 35 loads, each weighing about 2.5 tons," Kurganov said.

The pilot explained that coping with such conditions required careful assessment, paying attention to small details, and always making decisions with a cool head. "When you extinguish a fire, you're always thinking that you, your loved ones might end up in the center of such a catastrophe, and so you work, work and work some more. You commit yourself fully to help out."

Their mission had one perk, Derun said. "When you help people, you feel that you are needed, and that you are doing something useful in peacetime."

"In life there are gloomy days, but when you break through the grey clouds, you see a bright, clear sky, with beautiful clouds that form under you like a carpet. Then, you fly, and forget that the sky once seemed gloomy. You just fly…" Starukhin added, a faraway look and dreamy smile forming on his face.