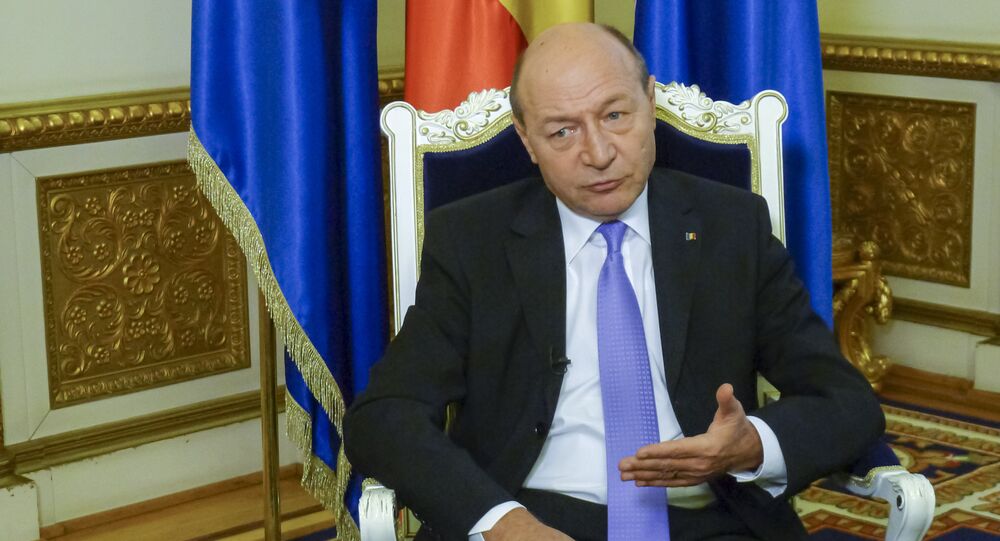 In a speech October 26, former Romanian President Traian Basescu suggested there was no need for US forces and weaponry to be posted in Europe, and ridiculed the notion of a "threat" posed to the continent by Russia. His comments will almost inevitably be extremely unwelcome to NATO leaders.

Traian Basescu, Romanian President 2004 to 2014, said October 26 the integration of national armed forces across Europe into a cohesive unit was essential for the European Union to solve external security problems and improve internal defenses.

Speaking at a conference at the National Bank of Romania, "10 Years Since Romania's EU Accession," the popular reformist ex-President noted member states had 178 weapon systems, while the US had but 30.

"The EU can defend its eastern flanks on its own, provided the armed forces are integrated. An integration of defense research is essential. We're all spending money to find out the same thing. Sooner or later, taxpayers will ask, 'why are we investing so much money in defense and are unable to defend ourselves and crying for the Americans to come defend us?' " Basescu said.

© AP Photo / Andreea Alexandru
Warfare or Welfare? Romania Seeks to Appease Washington by Beefing Up Military
He also implicitly ridiculed the notion of an existential "Russian threat" by noting the Russian Federation's defense budget totals US$66 billion, while EU member states had a collective total defense expenditure of US$263 billion.

Basescu's comments are notable for a number of reasons. For one, he is perhaps the first major political figure in an Eastern European member state to speak positively about the prospect of a unified European army.

Such a project, while ongoing for many years, has largely only been advocated previously by French and German leaders, and figures within Brussels. Other leaders in the region have remained tight-lipped on the prospect, or in the cases of Hungary and Poland, been ambivalent, or actively skeptical.

© AFP 2021 / JEAN-CHRISTOPHE VERHAEGEN
'Strategic Autonomy': France and Germany Flesh Out Plans for EU Army
Moreover, his sentiments run highly contrary to current government policy in respect of defense. In March, it was announced Bucharest was seeking to significantly bolster its military arsenal with the purchase of 20 F16 aircraft, 8-wheeled armored personnel carriers and other equipment, in a bid to drag national defense spending to the NATO-mandated two percent of GDP.

Moreover, incumbent ministers had spoken of siting Patriot missile systems on Romanian soil, following the lead of Poland — the provisions were utilized by Romanian forces in provocative NATO drills throughout Summer 2017.

However, perhaps most notably, he is one of the first frontline politicians in Europe to question the "Russian threat" narrative — and the corresponding claimed necessity of vast defense spending to counter it.

Ever since 2014, if not earlier, the fictional "Russian threat" has been used to justify a huge NATO buildup in the region — as of October 2017, there is an unbroken line of troops, planes, ships and missile defense systems running from the Northern tip of Belarus to Russia's southernmost border.

"Talking about a more assertive Russia is the only way to to keep defense outlays up. The NATO leadership is trying to convince member-states to spend more on defense — the Czech Republic, Bulgaria, Romania and others, especially in Eastern Europe are not eager to splurge on arms, and raising fears of an imaginary ‘Russian aggression' is the only way to make them pay up," foreign policy expert Dmitry Ofitserov-Belsky previously told Sputnik.

© REUTERS / Ints Kalnins
US Dominance Above All: Why NATO Chief Maintains 'There-Could-Be-Only-One' Stance on Calls for EU Army
Basescu's comments are likely to be unwelcome to NATO top brass. On top of the ongoing push, renewed greatly under Donald Trump's administration, for members to meet if not exceed the bloc's two percent of GDP defense spending, the US has long-considered Eastern Europe far more conducive to its interests than Western Europe. This was perhaps best encapsulated in 2003 by then US-Defense Secretary Donald Rumsfeld, in the leadup to the Iraq war.

"I think [Germany and France are] old Europe. If you look at NATO today, the center of gravity is shifting to the East. There are a lot of new members. Germany has been a problem, France has been a problem. Vast numbers of other countries in Europe [are] not with France and Germany, they're with the United States," he said.