The USS Nimitz, which is the largest warships in the world, is the supercarrier of the United States Navy and the lead ship of her class.

WASHINGTON (Sputnik) — The US Navy has announced that the nuclear powered aircraft carrier Nimitz and other warships had entered the Asia-Pacific region to join the US 7th Fleet.

"While in 7th Fleet, the Nimitz Carrier Strike Group (NIMSG) is scheduled for a port visit and will be ready to support operations throughout the AOO [area of operations]."

Warships in the Nimitz carrier’s battle group recently completed a three-month deployment in the Persian Gulf region to support the war against Daesh in Iraq and Syria, the release said.

The deployment comes just a day after the US nuclear–powered aircraft carrier Theodore Roosevelt entered the waters of the region in order "to conduct maritime security operations, theater security cooperation and port visits."

© REUTERS / Ahmad Masood
USS John S. McCain Diverted to Philippines Following Typhoon and Hull Crack
On October 23, the US also deployed the US Eighth Army to South Korea as a part of regular non-combatant evacuation drills, dubbed Courageous Channel. As a part of the drills, the troops will stay in the region until October 27.

The military buildup coincides with the serious escalation of the crisis on the Korean Peninsula, which have further ignited amid the US-South Korean massive drills that kicked off earlier in October, involving the deployment of 28,000 American troops to South Korea, the US aircraft carrier USS Ronald Reagan and Arleigh Burke-class destroyers USS Stethem and USS Mustin. Pyongyang has repeatedly slammed the annual drills it considers a threat to its security. Most recently, North Korea vowed to carry out an "unimaginable strike" if the drills continued. 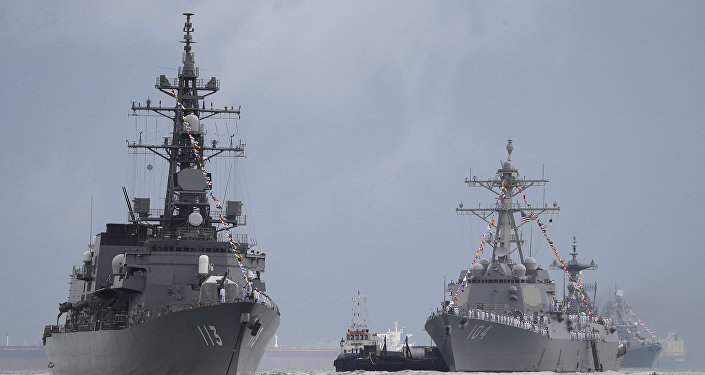 © AP Photo / Wong Maye-E
US, South Korea, Japan Military Drills a ‘Message to the North Koreans’
Simultaneously, the US, South Korea and Japan have launched the fifth cross-navy exercise off the Japanese and South Korean coasts since June 2016, where the sides will allegedly jointly practice detecting and tracking missiles launched in North Korea.