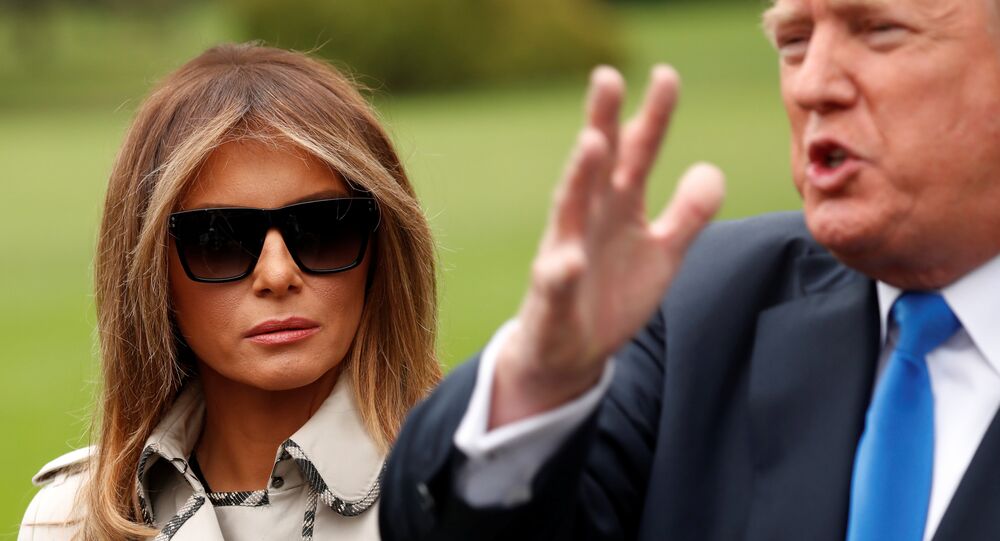 Social media has erupted with suggestions First Lady Melania Trump has a body double, who stands in for her on certain public occasions. The theory has been widely ridiculed, but the use of doubles by governments and intelligence services is very real.

The internet is abuzz with speculation that Melania Trump has a body double, who "plays" her during certain public appearances.

The theorizing erupted after the US President's wife appeared beside her husband on the South Lawn of the White House, wearing large sunglasses covering a large portion of her face, and maintaining a somber expression, saying nothing.

One Twitter user, Joe Vargas, leaped to the conclusion the woman couldn't possibly be the real First Lady — and his suspicions were reinforced when the President said "my wife Melania, she's right here."

I initially didn't notice, but thought it was strange when he said "my wife Melania, she's right here" to try & convince media it was her.

​His posts were shared thousands of times by other users, producing waves of shock, conjecture and mockery across the Twittersphere.

"We have a question for you Melania."

"Are you really Melania Trump?"

This is not Melania. To think they would go this far & try & make us think its her on TV is mind blowing. Makes me wonder what else is a lie pic.twitter.com/ebFLvSJkfm

Fake Melania turns out to be Stephen Tyler. pic.twitter.com/gxeYy1MDre

​On this occasion, postings about Melania's alleged double are largely being played for laughs — one joker went as far as to make a dedicated Fake Melania Twitter account, and another user has suggested the doppelganger is in fact a "Russian-made" android, parodying the mainstream media's own baseless theorizing of a secret connection between the government of Russia and the President.

Pretty clear to me all along.
Also;
Melania is a man,
Whole family is Russian android spy project.
©qz#resistancehttps://t.co/6Om4jrF9t1

Complicating the story, however, is that one of the many secret service agents guarding the President looks strikingly similar to the First Lady.

Conspiracy theories about doubles in politics — also known as political decoys — have an established history. In 2016, it was alleged Hillary Clinton had a body double, after the then-Presidential hopeful was forced to leave a 9/11 commemorative event early due to a sudden bout of pneumonia.

She left looking thoroughly unwell, but then appeared later outside her daughter's New York apartment in seemingly fine health. Thousands online were convinced the woman seen later was not Clinton, but her professional impersonator Theresa Barnwell, and #Hillarysbodydouble began trending on Twitter. Barnwell was even forced to issue an official denial of her involvement.

OK people, calm down. I was in LA today, all day. Was just messin' with your crazy conspiracy minded little heads. Go to bed.

Soviet leader Joseph Stalin is known to have had several doubles. Perhaps most prominently, an individual known only as "Rashid" was employed to play Stalin at public functions after World War II. To prepare for the role, he spent two years studying with Alexei Dikiy, an actor who played Stalin in films — although Dikiy so closely resembled him even Stalin's closest associates couldn't tell the difference.

After Stalin's death in 1953, Rashid moved to a provincial city, shaved off his mustache and gradually became bald — yet even then, the resemblance was so striking he often received astounded stares from passersby. He died in 1991, aged 93.

In 2008, another of Stalin's doubles, Felix Dadaev, came forward and told his story, aged 88. When he played the leader, he was only in his 20s, significantly younger than his subject — although makeup and the strain of war meant he could pass for the 60-year-old. He also watched movies and speeches of Stalin to perfect the mimicry of his movement and intonation.

"A side by side of #Joseph Stalin and his #body double #Felix Dadaev 1940" #history #pics #photography pic.twitter.com/J4Zp7maGL5

​"By the time my make-up and training were complete, I was like him in every way, except perhaps my ears. They were too small," he said.

Leader doppelgangers were also at the heart of several Central Intelligence Agency plots. In the 1960s, the Agency planned to bring down Indonesia's first President, Sukarno, by making a pornographic film starring a Sukarno lookalike in bed with a blond "Soviet agent."

#OTD in 1965 army conspirators attempted a coup in Indonesia that led to President Sukarno's fall from power. https://t.co/Gfl4jIPLtS pic.twitter.com/7WqgkyJNlM

It was intended that the circulation of the film would cause uproar and humiliation for the leader, forcing him from office, although the effort was ultimately unsuccessful.

​A similar ploy was hatched in the lead up to the 2003 invasion of Iraq, which would've seen a video depicting Saddam Hussein having sex with a teenage boy created and distributed across the country.

While that video was never made, the CIA allegedly did make a tape purporting to show Osama bin Laden and cronies sitting around a campfire swigging alcohol and reminiscing about sexual conquests with young. The actors were allegedly drawn from some of the Agency's "darker-skinned employees."