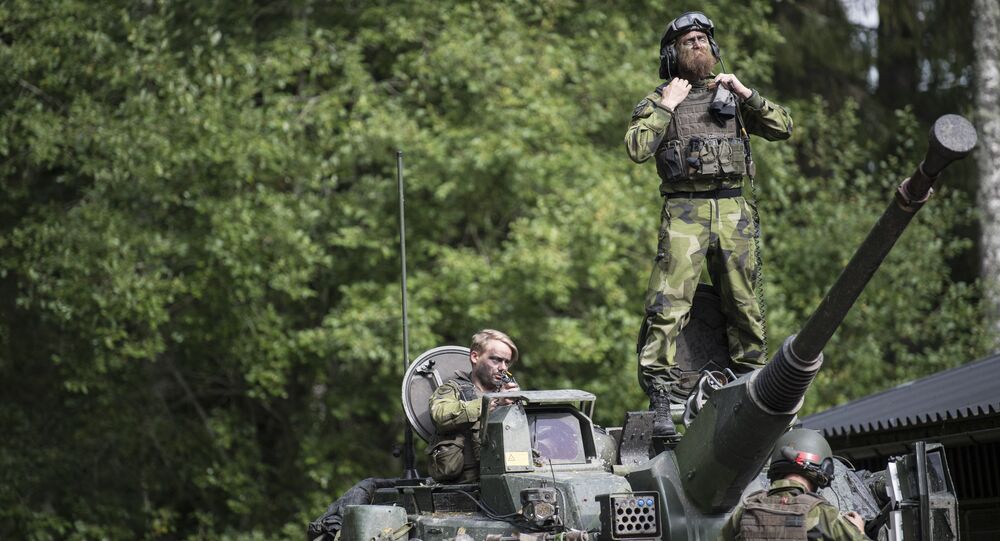 During Aurora 17, Sweden's largest military exercise in decades, a sharp increase in the number of reported spying threats has occurred, rekindling Sweden's preoccupation with the "Russian threat."

Aurora 17, which was conducted on September 11-29 and seen as Sweden's largest military exercise in 24 years, as well as a token of the non-aligned Nordic country's increasing cooperation with NATO, was reportedly exposed to a spike in spying attempts from foreign powers.

"We have received a lot of security tips during Aurora 17. Without exaggerating, we can talk about at least a tenfold increase compared with what is considered normal," Swedish Armed Forces press secretary Jesper Tengroth told the Swedish daily Dagens Nyheter.

The reports featured drones seen over the training grounds, including on the island of Öland, as well as suspicious activities on the ground. The Swedish Armed Forces attributed the spike to the scope of the exercise, which drew a lot of interest, considering that the over 20,000 participating personnel were likely to discover more suspicious behavior.

"We dislike it when people unentitled to take part in our actions nevertheless are suspected of doing so," Jepser Tengroth said. He also added that all cases of suspected intelligence gathering would be reported to Sweden's Security Police (SÄPO), yet declined to comment on the exact number and the nature of the cases.

"During Aurora 17, people who wanted to photograph and familiarize themselves with what was going on have been noted. They reportedly approached our units to get a photograph of our equipment and how we work. These forces were unwilling to disclose who they really were," Peter Hultqvist said. "When I get this type of behavior reported to me, I get an impression that these are attempts of spying," he added.

​In a case reported by Dagens Nyheter, a person in a car registered in an "eastern state" was encountered during the exercise. The stranger's explanation for his stay in the area was not considered credible. On the island of Öland, suspicious foreign motorhomes were spotted at the same time as the US Patriot air defense system was stationed there, the local newspaper Ölandsbladet reported.

Hultqvist argued that such behavior is something Sweden "recognized from past eras," drawing comparisons with intensive intelligence activities undertaken by the Warsaw Pact countries.

"We have invited observers to Aurora, but I believe Russia's interests go significantly deeper than just sending observers who can only perceive a limited amount of information. I can imagine that besides observer activity on legal grounds, there was also illegal spying to obtain information that could not be accessed otherwise," Stefan Ring told Swedish national broadcaster SVT.

However, Ring was not at all surprised by the alleged spying reports and dismissed them as "natural."

"It is quite natural that spying is carried out during a defense exercise of this size. It would have been strange if such attempts had not occurred," Stefan Ring said.

Aurora 17 was a Swedish national defense exercise featuring all of Sweden's combat forces, the nation's largest since 1993. The drills, whose scenario featured an attack by a fictitious superpower from the east bearing strong resemblance with Russia, involved 21,500 troops and 40 civilian authorities.

In addition to the host nation Sweden, seven other countries were invited to participate. The US accounted for the largest foreign element, aided by fellow NATO countries France, Estonia, Lithuania, Denmark and Norway, as well as Sweden's non-aligned neighbor Finland.

​Top Secret Drills With US

Part of the exercise was top secret, conducted only with elite troops from Sweden, Finland and the US, which marked the first instance of such cooperation. The US reportedly contributed a tiltrotor military aircraft of the CV-22 Osprey class, whereas Sweden engaged their Special Operations Group (SOG).

"We had a multinational force and moved over large areas of the ground, in the air and at sea. We acted very actively and solved many and difficult assignments within the framework of our duties and qualified intelligence gathering, and I believe we failed to draw any attention to us," SOG chief told Dagens Nyheter.