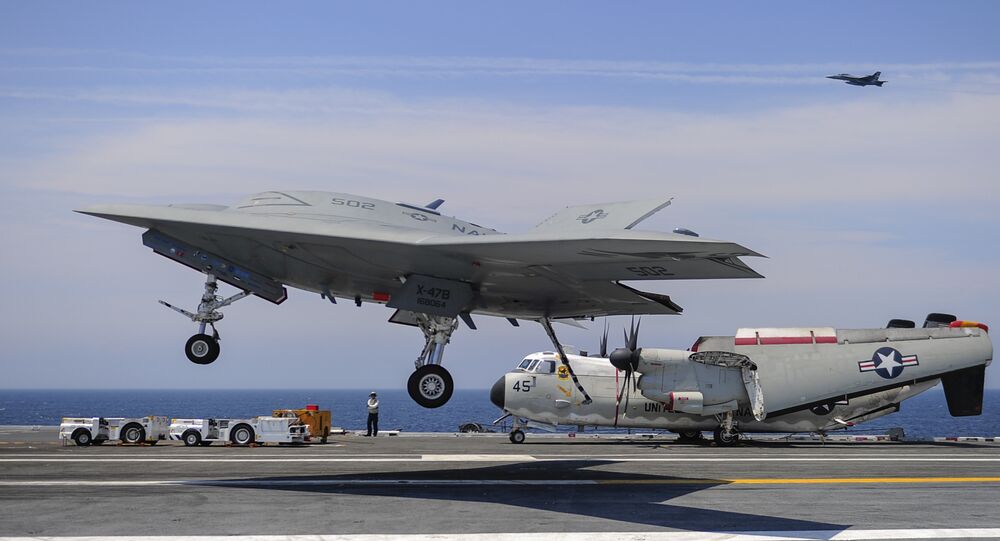 The competition to produce the US Navy’s carrier-based aerial tanker drone, the MQ-25 Stingray, has been whittled down to four companies: General Atomics, Lockheed Martin, Northrop Grumman and Boeing.

On Tuesday, the United States Naval Institute News service learned that Naval Air Systems Command had sent out requests for proposals (RPF) to each of the defense contractors listed above. It was widely expected these four firms would become the finalists, according to a Sputnik News report from June. Each have held contracts since 2011 to do concept development and design work.

The final RFP, sent out to companies last week according to a NAVAIR official, puts in motion the Navy's plan to announce a contract award in September 2018, according to USNI News. Once the General Services Administration and the Pentagon finalize the contract winner, it will take six to eight years for the MQ-25 to reach initial operational capability, according to a September Government Accountability Office report.

"The MQ-25 will give us the ability to extend the air wing out probably 300 or 400 miles beyond where we typically go," Vice Adm. Mike Shoemaker said in September, per USNI News, adding, "we will be able to do that and sustain a nominal number of airplanes at that distance."

As it stands, some F/A-18 Super Hornets have to limit their duties after taking off from carriers to simply refueling other jets, which is not exactly what the "attack" aircraft were designed to do. Between 20 and 30 percent of the navy's Super Hornet sorties are flying on refueling missions, USNI News notes.

Defense sources told Sputnik News on background that F/A-18s would run out of fuel after departing their carriers, dropping payloads and then returning if they did not top up during the latter part of the flight, making flying tankers virtually indispensable to what the Navy does on a regular basis.

Further, as long as Lockheed Martin's F-35Cs continue to lag behind schedule, the prospect of a dedicated carrier-based refueling aircraft would free up more planes for the service to marshal from carriers. Unlike the Marine and US Air Force variants, the US Navy's C-variant F-35s haven't reached initial operational capability.

General Atomics disclosed multiple details about its model to USNI News. For instance, retired rear admiral and current GA employee Terry Kraft said the Navy requested the firm to begin conceiving future variants of the Stingray with intelligence, surveillance and reconnaissance (ISR) capabilities, as well as weaponized versions of the aircraft.

While defense officials will be obliged to hear the offers from Lockheed, Boeing and Northrop, GA has a leg up designing and manufacturing drones for the military. Two of the first weaponized remotely piloted aircraft commissioned by the Pentagon — the MQ-1 Predator and MQ-9 Reaper — are General Atomics products.