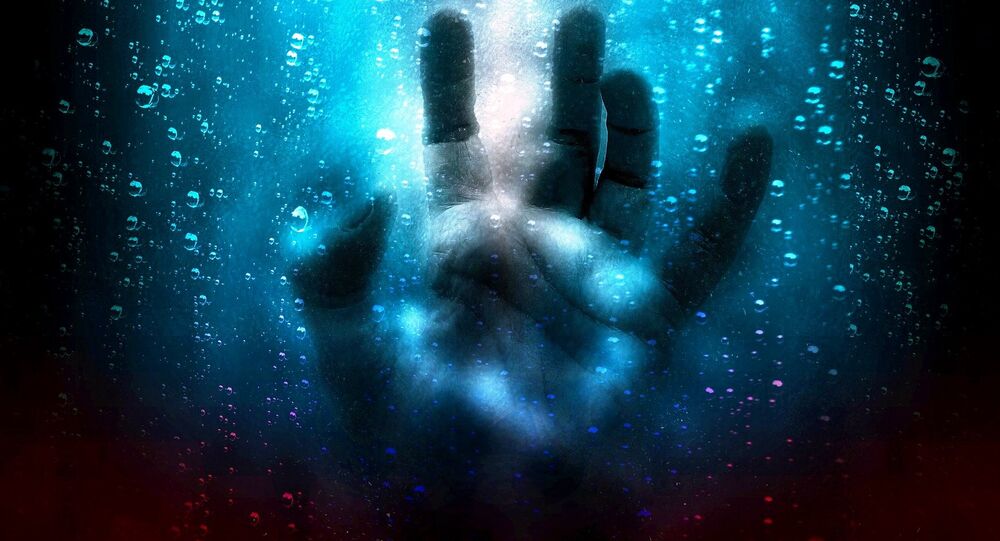 Documents unearthed by independent researchers offer a glimpse into the grim halls and cells of "Cobalt" - the Central Intelligence Agency's flagship offshore prison, which the detainees nicknamed "The Darkness."

Shocking details have emerged about Cobalt — the "black site" prison used by the CIA during the agency's post-9/11 torture program, where techniques crafted by shamed psychologist pair James Mitchell and John Jessen were inflicted on hundreds of inmates.

In August, Mitchell and Jessen settled out of court with former inmates of Cobalt. Their settlement precluded full details of the program from being aired publicly — but Freedom of Information requests lodged by Torture Database researchers have unearthed 274 documents released in the case.

While partially redacted, they paint a vivid picture of the grim reality of the secret world that existed within Cobalt's walls.

© AP Photo / Trial Evidence/ACLU
These undated still photos from trial deposition video, accepted as evidence in court and provided by the American Civil Liberties Union, shows psychologists James Mitchell, left, and John Jessen, defendants in a landmark lawsuit that the ACLU filed against the creators of the CIA's harsh interrogation program used in the war on terror.

The story begins in June 2002, when after being approached by the CIA, Mitchell and Jessen crafted a list of "techniques" to be used to torture prisoners, including "walling" (slamming inmates into flexible walls), confining people in cramped boxes for hours, and waterboarding.

The aim was to "reach the stage where we have broken any will or ability of subject to resist or deny providing us information," the pair unambiguously stated.

Before Cobalt opened, their proposals were tested out on Abu Zubaydah, a man alleged to have played an intimate role in the planning and execution of 9/11. By day six of his period in experimental captivity, Mitchell and team noted interrogators need only point to a cramped box and say "you know what to do" for the subject to voluntarily crawl into the confined space "for 1000 hours without protest or additional instructions."

Abu Zubaydah Waives Immunity to Testify About His #Torture in a Military Commission Trial at #Guantanamo https://t.co/k1ityhIrB2 pic.twitter.com/exnWJhgglN

His treatment was regarded as successful by the duo, who recommended the campaign of abuse waged at him "be used as a template for future interrogation of high value captives."

Zubaydah remains in captivity, in Guantanamo Bay. He was waterboarded at least 83 times while under the CIA's administration, even though it was noted his responses in interrogation "did not correlate well with his waterboarding sessions."

Lutfi al-Arabi al-Gharisi, a citizen of Tunisia currently, held in extrajudicial detention by the US, was also a former Cobalt inmate. He was tortured by CIA officials who did not have authorization, undergoing at least two 48-hour sessions of sleep deprivation in October 2002.

In September 2002, Cobalt opened outside Kabul, Afghanistan. Its 20 cells were immediately filled.

In regular cells, inmates were shackled to a wall-mounted metal ring, and a bucket served as a toilet. In sleep deprivation cells they were shackled by their hands to the ceiling, made to defecate in diapers, and make new diapers out of duct tape when theirs had been soiled.

The cells were unheated, and inmates were subjected to blaring music every second of every day — including songs by Eminem, Christina Aguilera, The Bee Gees and Marilyn Mason.

The site came to be referred to "The Darkness" by inmates — the name stemming from all the installation's lights being connected to a single switch, and frequently being switched on and off at random.

After a subsequent visit, Jessen told an investigator he was impressed with the site — the atmosphere "was very good — nasty but safe."

Jessen had been visiting the site to oversee the interrogation of Gul Rahman, a detainee who was interrogated for several weeks in November.

Rahman, wearing only socks and a diaper in the unheated cells, was subjected to 48 hours of sleep deprivation and cold showers, despite concerns by one supervisor that he might develop hypothermia. Jessen told guards complaining of cold was in fact a "resistance strategy."

Other resistance strategies alleged by the pair included requesting a lawyer or medical assistance, and reporting torture. As a result, Cobalt — under the pair's mephitic guidance — responded to prisoners' requests for clemency, pain and fear of death with yet more — and often intensified — brutality.

Jessen left Cobalt November 14, 2002, advising Rahman continue to undergo extreme deprivation. Five days later, Rahman died of hypothermia. He had been left in his cell naked from the waist down.

Six months on, Mohamed Ben Soud and Suleiman Abdullah Salim were among 39 individuals sited in Cobalt. They were beaten, walled, placed nude in plastic sheets surrounded by ice, and placed in confinement boxes for hours. They were eventually released without charge after officials decided that they posed no threat.

They — and Rahman's family — would go on to sue Mitchell and Jessen, resulting in the release of the redacted documents detailing the horror at Cobalt.

After gaining such prominence in the agency, Mitchell and Jessen were quickly losing their luster, and making powerful enemies. Internal memos indicate officials were keen for the pair's roles and responsibilities be strictly defined, "before their arrogance and narcissism evolve into unproductive conflict in the field," another complains of their attempts to involve themselves in other areas of agency business.

When they suggested they would draft a new code of ethics for the CIA, it was remarked they had "both shown blatant disregard for the ethics shared by almost all of their colleagues."

As a result, in May 2003, they were moved to "mostly strategic consulting work, research, and program development projects" — although over the next four years, increasing awareness and criticism of "enhanced interrogation techniques" employed by the agency saw the duo pushed ever from the CIA's center, into the peripheries of plausible deniability.

In 2006, four of the techniques were thrown out in accordance with the new Military Commissions Act.

Despite their intimate involvement in the project, and their evident pride at what they had created, after their settlement, the pair's main legal representative said the treatment endured at the camp, while "regrettable," was not the fault of his clients.

"If this case had gone forward, the facts would have borne out that while the plaintiffs suffered mistreatment by some of their captors, none of that mistreatment was conducted, condoned or caused by Dr. Mitchell and Jessen," lawyer James Smith said.