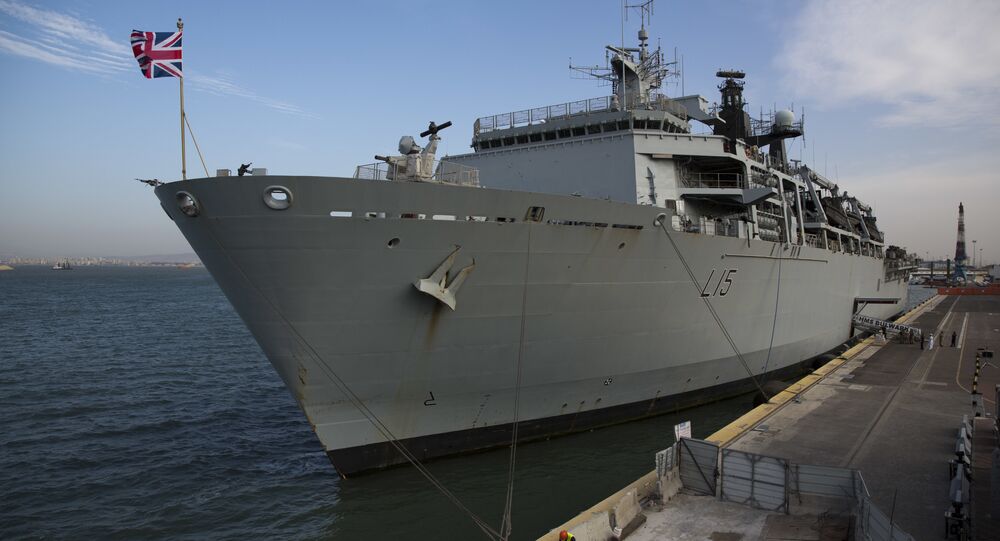 Due to further proposed cuts, the British Royal Navy could lose its amphibious assault ships, and around 1,000 Royal Marines, despite repeated calls from UK officials for increased defense spending.

The UK Royal Navy could be stripped of its ability to attack enemy beaches under cost-cutting plans, with amphibious assault ships HMS Albion and HMS Bulwark taken out of service, mainstream media reports suggest.

The shock proposal comes mere days after Defense Secretary Michael Fallon used his speech at the Conservative Party Conference to call for an increase in defense spending above and beyond the NATO two percent commitment, and for the UK Armed Forces to "modernize" as threats "intensify."

Fallon's call for the government to "properly protect" the UK against "cyber, hybrid warfare, rogue states, terrorist attacks," and "make sure we are spending enough," stands in contrast to the prospect of further cuts to the already depleted Royal Navy.

The loss of the ships would leave the Royal Navy without a dedicated amphibious assault ship. Beach landings in enemy countries and areas have been used in many modern conflicts, including D-Day and the Falklands War — while it has been some time since the Royal Navy carried out such an operation (disregarding an "accidental" invasion of Spain in 2002), both ships have been used for non-assault missions in the modern epoch. For instance, HMS Bulwark has been involved in migrant rescue missions in the Mediterranean since 2016.

The plans would also see 1,000 Royal Marines — the Navy's amphibious troops — cut from the ranks, and "repurposed" elsewhere. Their most likely destination is said to be the UK's two new flagship aircraft carriers, HMS Queen Elizabeth and HMS Prince of Wales.

Plans for the carriers date back to 1997, although it took until 2007 for a contract for the vessels to be announced, and another year for it to be awarded — and uncertainty surrounded the project for almost a decade afterwards, with serious concerns over spiralling costs and operability abounding.

HMS Queen Elizabeth is now seafaring, and docked in Portsmouth, but the 280-meter-long carrier cannot actually deploy planes as yet — and it is expected it will take another 18-months before it becomes fully operational. ​It is hoped when battle-ready, the carrier will host a range of F-35B Lightning II Joint Strike Fighters, although serious questions hover over whether the HMS Queen Elizabeth will even be able to serve as a launchpad for these jets.

Moreover, the vast vessel must be manned by a crew of 700 — and a lack of staff mean redundant Marines may be expected to make up the shortfall.

© AP Photo / Mindaugas Kulbis
You and Whose Army? UK Forced to Rely on NATO Air Support Due to Budget Cuts

Lord Paddy Ashdown, ex-Liberal Democrat Leader and himself a former Royal Marine, said  if the government was allowed to get away with the proposed cuts, it would "betray the best traditions of our past and damage our ability to defend ourselves in the future."

"It is time for those who value Britain's contribution, both nationally and internationally, to the preservation of peace to make sure this disastrous decision is never allowed to be taken," he added.

A spokesperson for the Ministry of Defense said no decision had been made, and "any discussion of the options" was "pure speculation."