Many former US Central Intelligence Agency staff join the Signa Society upon retirement - little public information is available on the group, although declassified files indicate many of its members still "contribute significantly" to Agency operations.

In public terms, SIGNA may as well not exist — its LinkedIn page lists no actual information of the group, merely linking to its website, and offering a post office box number in the contact section. It has one listed employee on the social network.

Its website is similarly scant on information, with most content hidden from non-members. However, its landing page states the site is "designed for a select group of federal retirees."

"Members must meet an eligibility requirement and have 20 years or more of federal service. There is an associate membership available — these individuals must met [sic] an eligibility requirement as a current federal employee with 10 years' service. Registered Guest eligibility is explained further when you register as a guest. Members have access to a full range of features including Scholarship application. SIGNA members visiting this Web site for the first time will be asked to register as a new member even though they are established, long-term Society members," the statement reads.

There is barely any information on the group elsewhere on the web — it is mentioned in a few CIA employee obituaries in the mainstream media without much explanation, and its listing on a non-profit directory merely states it is a "Pleasure, Recreational, or Social Club." 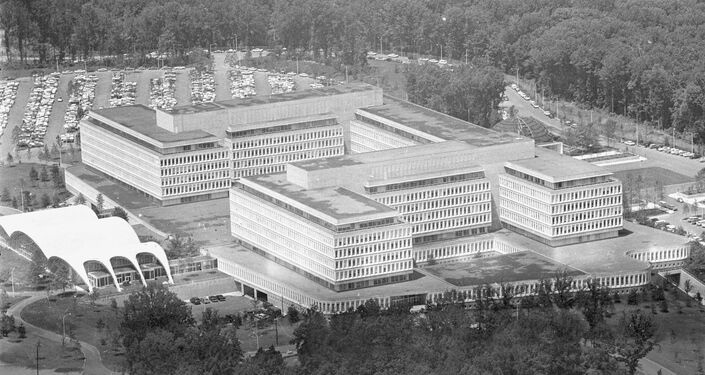 © AP Photo
This is a general view of the new headquarters of the Central Intelligence Agency, CIA, at Langley, Virginia, on July 10, 1962.

If this were true, SIGNA would seem somewhat repetitive — the CIA has another group for former operatives, the Central Intelligence Retirees Association (which likewise boasts a website, although access is entirely restricted), which is said to facilitate social contact between former agents.

However, what declassified files exist on SIGNA suggest the group has an operational element — in other words, the retired CIA employees among its ranks aren't actually quite so retired.

The SIGNA Society was first formed in April 1970, although its non-profit status was not recognized by US authorities until September 2014. According to a 1981 memo to the Deputy Director of Central Intelligence (DDCI), the group's charter indicated that it was "a nonprofit, nonpolitical organization founded by retired Agency employees, which does not promote or sponsor any causes.

"The society was established to promote fraternal fellowship, sociability, loyalty and goodwill among members, and bring social, educational and cultural entertainment to its members, their families and friends," the memo states.

However, despite the memo claiming SIGNA has "no relationship whatsoever with its former employer," in the next sentence it notes SIGNA is "very supportive" of the CIA, with members "tenaciously defending the organization in both private and public." The memo even suggests the DDCI meets with SIGNA, to explain the ways which retirees might "properly and correctly help the Agency" without generating "unfair criticism from the media."

The CIA's archives also indicate it was common for the SIGNA Society to meet with senior level Agency personnel, including George H.W. Bush, then-CIA Director.

By 1982, the SIGNA Society had over 250 members — that year's annual convention was attended by the Director of Central Intelligence, William Casey. In an internal memo sent to Casey, it is suggested he make a speech on the "role of the alumnus" to the CIA's overall intelligence mission, "recently signed legislation" on protection of undercover identities, "use of the polygraph" and "leaks." In respect of the last talking point, the Freedom of Information Act was the intended topic of discussion.

The memo was circulated at a time the CIA was lobbying legislators to largely exempt the US intelligence community from Freedom of Information requests — and it recommends any topics other than leaks "be afforded very brief treatment," a further suggestion of how determined the CIA was to keep its activities hidden from public view.

© AP Photo / Phil Coale
Former President George H. W. Bush speaks at a leadership forum, Monday, Dec. 4, 2006, in Tallahassee, Fla. Bush was invited to the forum by his son Gov. Jeb Bush.
Casey was recommended to "note abuses permitted under current legislation" and advocate for a change in FOIA legislation, as the CIA was being compelled "to release sensitive but unclassified information" and could accidently disclose classified information in the process.

While the available documents don't offer a particularly rich depiction of the group and its members activities inside and outside the Agency, one memo makes clear that while some of SIGNA's members are fully retired, others were "actively engaged" in agency work, "usually related to security. Some members were even still associated with the Agency in "contract status" — contributing "significantly as "on-call" investigators and in other security specialties."

The memo arguably reinforces the sentiments of former Federal Bureau of Investigation Agent Ted Gunderson, who said there were "no alumni" in the CIA.

"Once a CIA agent, always a CIA agent. If you attempt to get out or expose them, you either go to jail or you die," Gunderson stated.