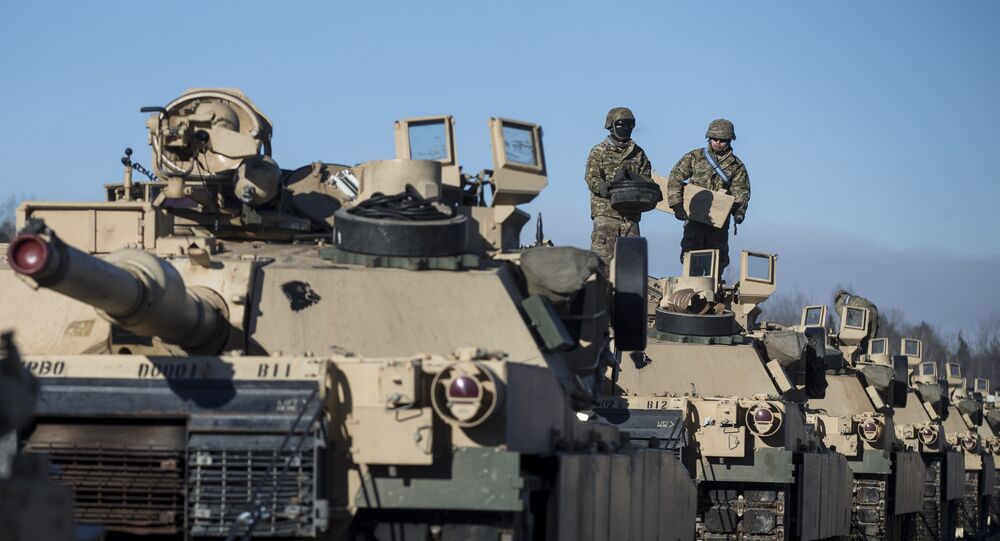 The US military will be installing the Israeli-built Trophy Active Protection System (APS) meant to intercept and destroy incoming missiles or rockets on their M1A2 Abrams tanks. This will make the US military the only other besides the Israel Defense Forces (IDF) to use the defensive system.

The Trophy system consists of a quartet of radar antennae and fire-control radars that detects incoming projectiles, such as anti-tank guided missiles and rocket-propelled grenades (RPGs), and then destroys them with a blast like that from a shotgun.

It is a "hard kill" system, meaning it protects the vehicle by destroying the projectile; this is opposed to a "soft kill" system that interferes with the missile's guidance and redirects it. Soft kill devices are useless against the simple RPGs popular with militant groups such as Daesh.

The Pentagon made this decision after an "urgent material" request, they said in a press release on Thursday. Each system costs an estimated $350,000, and it will be first deployed to one of the US Army's 14 Armor Brigade Combat Team's squadron of 28 M1A2 SEPv2 variants, a nearly $10 million contract. It may then be added to other squadrons later on if it impresses, the Pentagon said.

Anti-materiel weapons such as RPGs have been a perennial thorn in the side of the US military and its allies. A $2,000 RPG launcher firing a $500 grenade can destroy or disable a $9 million Abrams tank. Over the course of 2014, the Iraqi Army lost 100 of the 140 Abrams the Americans had sold them in the fight against Daesh.

But Israeli tank brigades, which have been equipped with Trophy systems since 2009, have met with more luck. During 2014's Operation Protective Edge, Gaza Strip militant groups were unable to destroy a single IDF Merkava Mark IV battle tank. The IDF reported that at least 15 RPGs were successfully intercepted over the seven weeks of ground operations without a single false alarm or misfire.

The US Army presently deploys almost 1,200 M1A2s. Should the Trophy system be added to every single one, this would come out to an expense of about $420 million.

A US company did develop their own APS system, Quick Kill, designed by defense contractor Raytheon in 2006. However, the Trophy proved the superior system of the 15 option analyzed by the Pentagon, and it "worked in every case," according to an anonymous Pentagon official speaking to NBC in 2007.

"The only anomaly was that in one test, the Trophy round hit the RPG's tail instead of its head. But according to our test criteria, the system was 30 for 30."