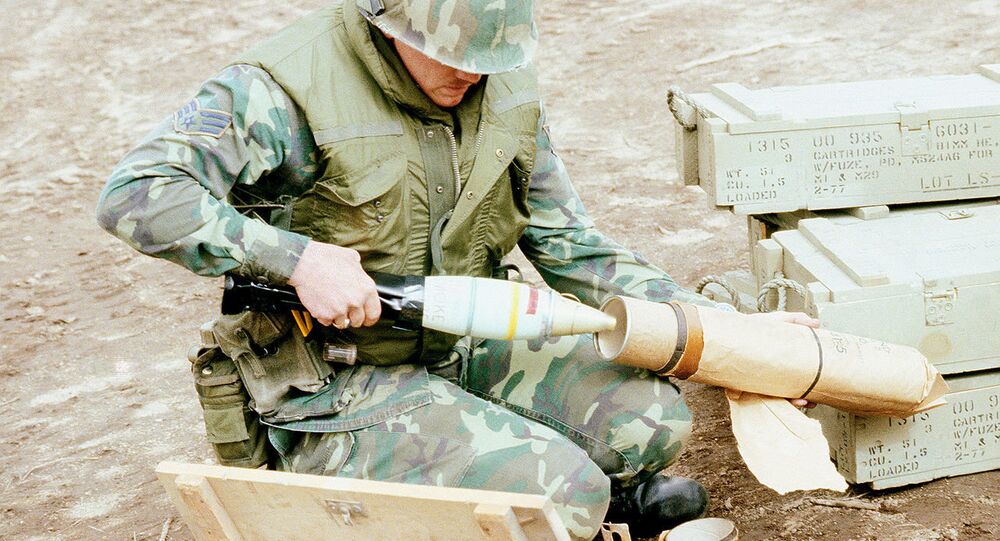 Pentagon Refutes Damascus Claims of Phosphorus Bombs' Use by Coalition

The Pentagon called the reports on the US-led anti-Daesh coalition's use of phosphorus bombs in Deir ez-Zor false.

On Wednesday, Syria's state media reported that US-led coalition aircraft carried out strikes on a civilian district in the Syria's Deir ez-Zor province using white phosphorus munitions, killing three people and leaving five others wounded. According to the reports on Syrian TV and SANA news agency, the strike was carried out in Al-Suwar, a small town east of the city of Deir ez-Zor.

In August, the Syrian government also blamed the coalition for dropping phosphorus bombs on Raqqa.

"The report is false. A review of the coalition's strike logs indicates no corroboration with the time, date, location, and munition of the alleged incident," Operation Inherent Resolve’s press office told Sputnik on Thursday.

On August 4, the coalition reported that "at least 624 civilians have been unintentionally killed by Coalition strikes since the start of Operation Inherent Resolve" against Daesh in Iraq and Syria in 2014.

The Syrian Ministry of Foreign Affairs, Damascus has numerously accused the coalition of using white phosphorus, prohibited by international convention, to destroy infrastructure and kill civilians.

US media reported a few days before that the US-led coalition in Iraq is using white phosphorus munitions in its fight against the Daesh. The Washington Post made an inquiry regarding an image, published by the US military-operated Defense Video & Imagery Distribution System, showing coalition troops with M825A1 white phosphorus projectiles.

Coalition spokesman Col. John Dorrian also confirmed the use of white phosphorus to the newspaper, stating that the munitions are used for screening, obscuring and marking, adding that white phosphorus is "used generally for the circumstances which I described."

© AFP 2020 / FABRICE COFFRINI
UN ‘Not Finding Any Solutions’ in Syria: US Is Making Bad Situation Worse
Recently, Human Rights Watch reported the coalition had killed at least 84 civilians, including 30 children, with two airstrikes near the city of Raqqa in March.

White phosphorus munitions, while not specifically banned by international law, are restricted from use in indiscriminate attacks against civilians by the 1983 UN Convention on Certain Conventional Weapons. White phosphorus ignites on contact with oxygen and causes deep skin burns.

The United States previously admitted to using white phosphorus during the Iraq war in 2004, but denied the weapons were used against civilians. The munitions have also been used by NATO in Afghanistan.