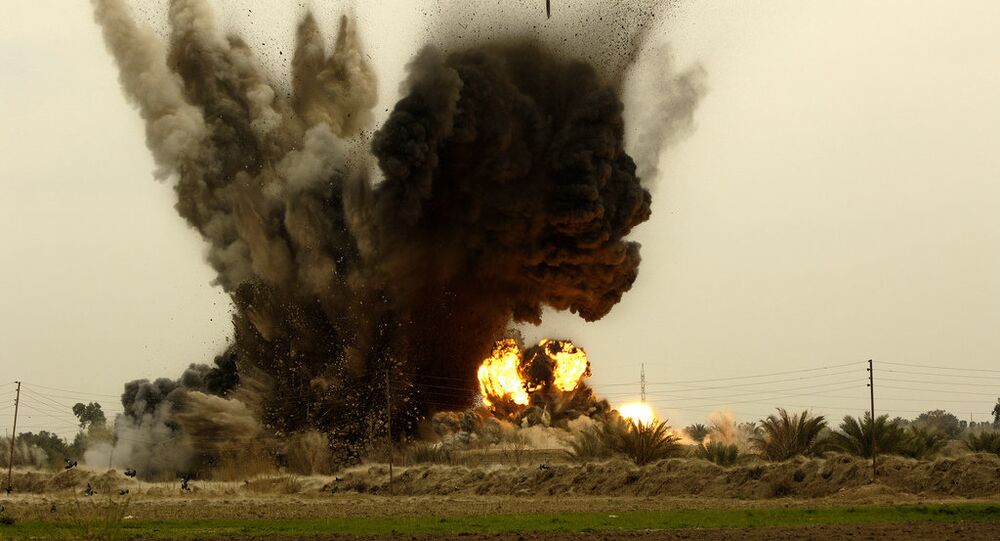 The UK Ministry of Defense claims the Royal Air Force has killed more than 3,000 Daesh fighters in Iraq and Syria over the past three years, but no civilians, a suggestion challenged by Radio Sputnik’s Brian Becker and John Kiriakou.

The UK Ministry of Defense made a statement recently claiming that its Air Force has killed more than 3,000 Daesh fighters over the course of last three years. An estimated 2,684 militants were killed by British bombers in Iraq, while some 400 fighters are believed to have been killed in Syria.

At the same time, the MoD has boasted that they have "no credible evidence" that a single civilian has been killed during the airstrikes.

© Photo : Youtube/Sputnik
Russian Military Builds Bridge Across Syria's Euphrates Amid Constant Shelling
However, they did acknowledge that "this isn't the same as saying we have not or will not do so, especially in close urban fighting against a ruthless terrorist enemy that uses civilians as human shields," according to a report by the Mirror.

The claims about the lack of civilian casualties look particularly suspicious considering the United States central command has admitted to at least 484 civilian death caused by their bombings against Daesh in the region.

According to Carter, such numbers are statistically impossible. The issue of civilian deaths has already been raised a number of times by various human rights organizations and even the United Nations.

© REUTERS / Ari Jalal
Iraq's Kurds Say 'Yes' to Creation of Independent State - Electoral Commission
The problem with counting civilian deaths is that Western forces really have no means to monitor them. Carter quoted the US Central Command saying they are not able to investigate civilian deaths because the only way they can obtain data is from satellite footage, drone footage and the pilots who fired missiles themselves. With that degree of fidelity, it is often impossible to discern a terrorist from a kid wearing dark clothes.

Another problem is that official numbers are irrelevant because of flawed counting methodology, the author noted.

"I know from drone whistleblowers they have killed children accidentally by firing from a drone and they had written it up as having been killed a goat, which happens all the time, " Kiriakou noted.

While it is fairly obvious that there have been civilian deaths, if for no other reason than because of prior statistics, there must be a reason for the British government to come up with such a contentious statement.

According to Carter, one reason why they would do that is because the UK struggles to remain relevant in the region. The British Parliament has been quite reluctant to authorize military involvement in the Middle East under Prime Ministers David Cameron and Theresa May, which is harmful for British military presence there. This, correspondingly, harms the UK's plans to expand its role in NATO.

The UK also seeks to build new military bases in the Arabian Gulf and expand its presence there. Why? Because the UK sides with a certain coalition of Middle Eastern states — that being the reason for the British government making statements that seemingly achieve nothing for the UK itself.

And the key reason for the aforementioned domino logic lies in the fact that UK relies heavily on arms sales to Middle Eastern countries, such as Saudi Arabia.

"In order to keep getting our money's worth we have to keep getting involved ourselves in conflicts in that region and basically partner up to countries which themselves — and there is a lot of evidence — keep backing radical groups in countries like Iraq, like Syria, destabilizing these nations and fueling sectarian tensions there," Carter said.

The UK military command needs Parliament's approval of its military activities so that at the end of the day the UK could sell more weapons to its customers. That, according to Carter, is the reason UK military authorities make statements that make UK look good.