A former counter-terrorism detective has told Sputnik the individual who struck a London Underground tube at Parsons Green station on Friday was no amateur - and wants to carry out more attacks.

Speaking to Sputnik in the wake of a terror incident at Parsons Green underground station in west London, in which at least 22 were injured by an improvised explosive device left on a tube train during morning rush hour, David Videcette, a former Metropolitan Police counter-terrorism detective, who was involved in the 7/7 bombings investigation, offers cause for relief and worry alike.

Explosion on a District Line train at Paraons Green. Images (below) posted on Twitter appear to indicate that it's some form of IED pic.twitter.com/1rR18Yepbv

​"Going on what we know so far, it appears to be a liquid improvised explosive device (IED), placed in a plastic container, with fairy lights as an electronic initiator — they may have picked fairy lights because they often come with delayed timers. This was meant to set off a chain reaction in the container, but that evidently hasn't taken place at the right moment, so luckily the main charge didn't explode," Mr. Videcette told Sputnik.

1. I've heard a few people suggest that the construction of the device at #ParsonsGreen is the work of an amateur. This is incorrect.

​Nonetheless, Mr. Videcette is quick to dismiss notions the attack was the work of an amateur —"ultimately, they set out to carry an attack, and the initial stages succeeded."

"They managed to get a bomb to a target location without detection, and it's not always easy to do that. Because it didn't explode properly, we have no idea what the impact could've been, if successful. They may have intended to set off a large explosion and cause dozens of injuries, or it might've much been less ambitious than that," he continued.

The attack has perhaps predictably provoked parallels with the 7/7 bombings, when British-born Muslims detonated four bombs in London during rush hour on three tubes and a bus, killing 52 and injuring over 700. While they have much in common, Mr. Videcette said there were several key differences between the two attacks.

"On 7/7, the bombers all detonated their bombs in the front two carriages. Why that was we don't know — we suspected but couldn't prove they wanted to derail the train. This attacker appears to have simply picked the busiest carriage — or one that was convenient for him to get off.

"Similarly, the 7/7 bombers wanted to be identified, but this is clearly someone who didn't. They could've carried out something much bigger if they didn't mind getting caught, or even wanted to — using a knife or similar blunt force weapon. This is someone who wants to strike again, and carry out more attacks," Mr. Videcette told Sputnik. 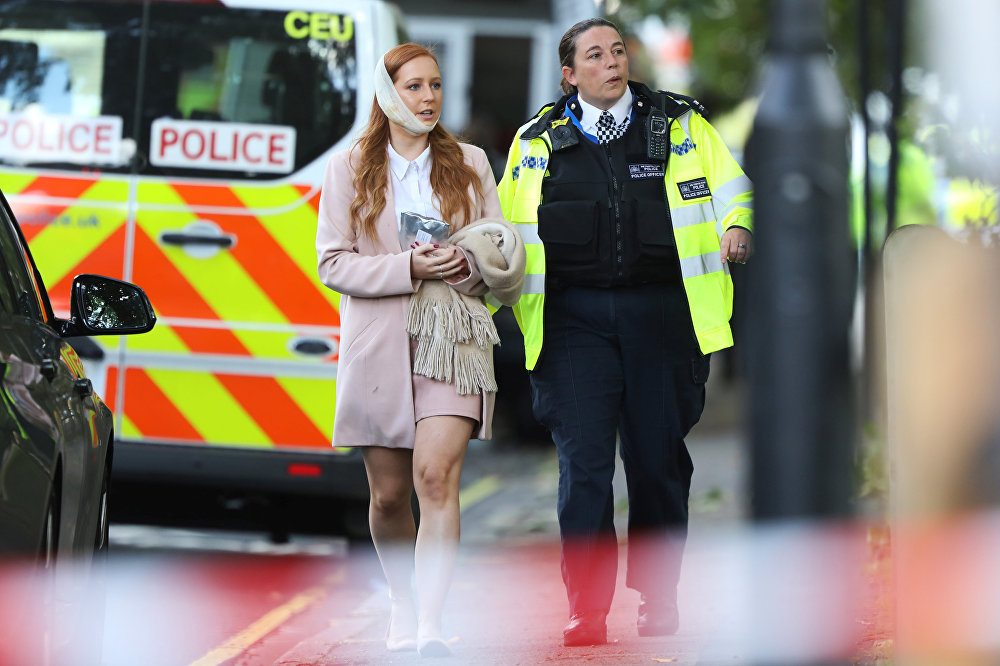 © REUTERS / Luke MacGregor
An injured woman is led away after an incident at Parsons Green underground station in London, Britain, September 15, 2017

​While such a prospect will no doubt terrify Londoners, if not all UK residents, Mr. Videcette suggested the attacker would be comparatively easy to identify — the bomb was left on a central-bound District line tube, five stops away from its departure station (Wimbledon).

Analysis of CCTV at the quintet of stations on the line prior to Parsons Green would quickly reveal a likely suspect (or, suspects) — and unconfirmed mainstream media reports suggest police have indeed identified an individual. Nonetheless, the discovery has not been officially confirmed, and a major manhunt is underway.

Keep Cautious and Carry On

For the former counter-terrorism officer, the attack serves as a palpable demonstration of the importance of vigilance on public transport — after all, the attacker managed to leave a bomb on a crowded train without any passengers noticing, until it was too late.

The bomb's plastic container (which Mr. Videcette notes was also a feature of the 7/7 attacks, and other strikes since) was an ideal vessel for the device, as it someone carrying a paint container on a  tube into central London "wouldn't have looked too unusual."

"People need to be vigilant — if you spot an apparently unattended bag, ask whose it is. If you see someone seemingly leave a bag somewhere, challenge them and ask whether it's their bag. If they don't respond, or respond remotely suspiciously, get everyone out of that area as quickly as possible. At the end of the day, you are your own health and safety officer," Mr. Videcette concluded.