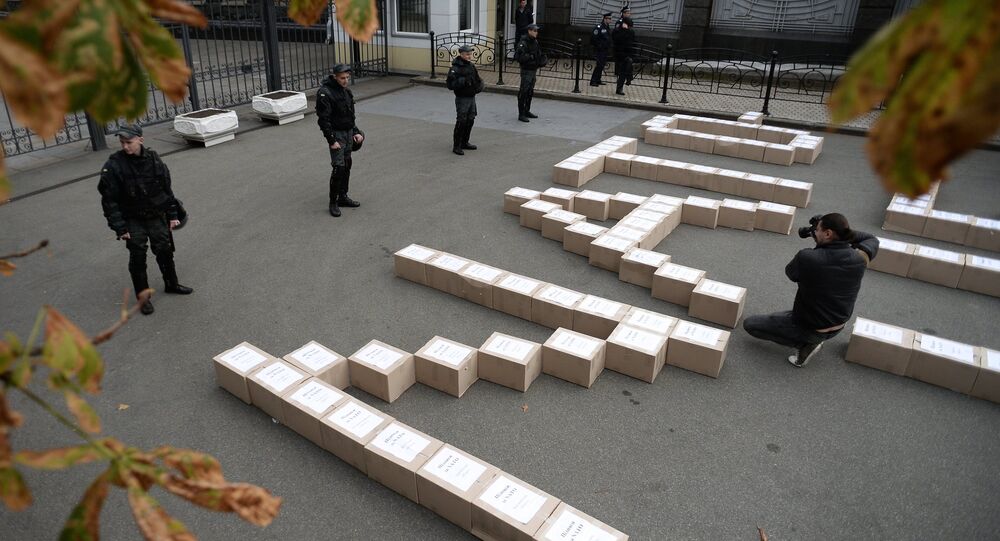 NATO’s unwillingness to consider a Membership Action Plan for Ukraine reflects its fears that accepting a country engaged in an internal armed conflict could unravel the entire system of European security and harm the alliance, Ukraine and other non-NATO countries as well, political analyst Vladimir Kozin told Sputnik.

Earlier, NATO Secretary General Jens Stoltenberg told RIA Novosti that Brussels had put the idea of Ukrainian membership on the back burner and was now focused on efforts to reform the country’s defense and security sectors, which he said were important for Ukraine irrespective of its membership or non-membership in the alliance.

In an interview with Radio Sputnik, military expert Vladimir Kozin explained why NATO was in no hurry to fast-track Ukraine’s accession to the alliance.

© AFP 2020 / AUDE VANLATHEM / BELGA
US Special Representative Says Ukraine Not Ready Yet to Join NATO
“The North Atlantic Alliance can’s accept Ukraine because it does not meet its membership criteria, and also because Kiev is waging armed aggression against peaceful residents of Donbass, including with the use of heavy weapons,” Vladimir Kozin told Sputnik.

"By wishing to join NATO, Ukraine would like to use the alliance’s military, technical and financial potential to dictate its ways to other countries. In any case, Ukraine’s potential accession could destroy the system of European security to the detriment of NATO, Ukraine and other non-member countries,” Vladimir Kozin argued.

Besides, Kiev’s rapprochement with NATO per se would pose a risk to Ukraine’s neighbors, he noted.

“NATO keeps the door open for Ukraine’s future accession, which means that it wants to turn Ukraine into a country to fight its own people, but also to use it in proxy wars against other countries,” Kozin said.

On December 23, 2014, the Ukrainian Parliament passed a bill canceling the country's non-aligned status and confirming Kiev's determination to join NATO.

© AP Photo / Mikhail Palinchak, Pool
Ukraine Joining NATO Should Be Decided Only By Two Sides - Stoltenberg
Ukraine's NATO bid has prompted a mixed reaction from the alliance, with the US ambassador to Ukraine saying the country was "far from being ready" to join the bloc, urging Kiev to implement social reforms before pursuing NATO membership.

The Membership Action Plan (MAP), approved in 1999, is a NATO program of advice, assistance and practical support tailored to the individual needs of countries wishing to join the alliance. Participation in the MAP does not prejudge any decision by the alliance on future membership.

Current participants are Bosnia and Herzegovina and the former Yugoslav Republic of Macedonia.