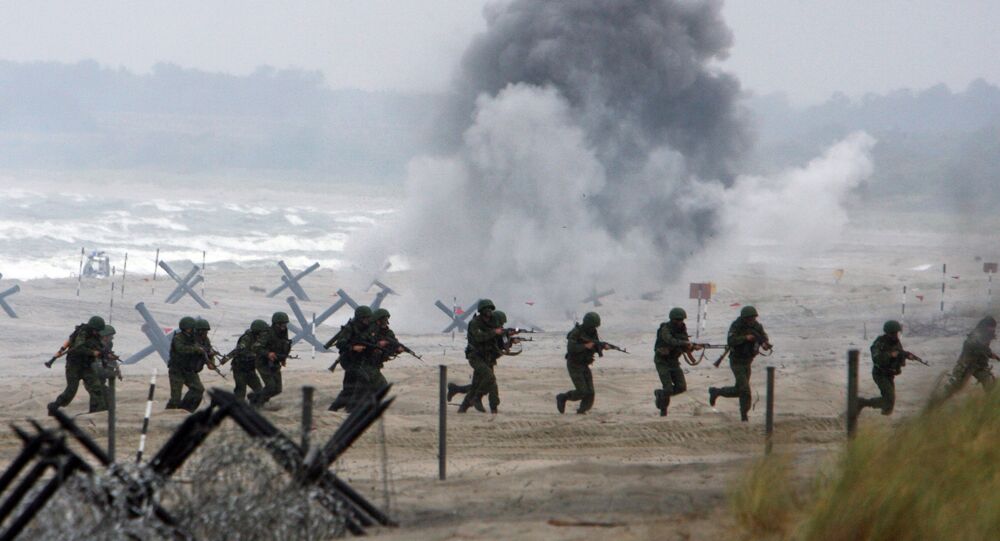 As the Russia-Belarus Zapad 2017 war games have started earlier in the day, Sputnik has summed up all the information currently available about the drills, which had prompted criticism from several eastern NATO states long before they had kicked off.

MOSCOW (Sputnik) — The strategic military exercise by Russia and Belarus, dubbed Zapad-2017 (West-2017 in Russian), kicked off on Thursday on the territories of the two allied countries.

The joint exercises, dubbed Zapad or Union Shield, are a biennial combat training event held by rotation in Belarus and Russia.

The Zapad-2017 drills that kicked off earlier in the day will continue until Wednesday supervised by chiefs of national armed forces’ general staffs.

The exercises involve about 12,700 officers and soldiers, including about 7,200 servicemen from Belarus, with the Russian Armed Forces committing about 5,500 officers and soldiers. Of this number, about 3,000 service personnel will exercise in Belarus. The drills will also involve about 70 fixed-wing aircraft and helicopters and up to 680 pieces of ground-based military equipment, including about 250 tanks, up to 200 artillery systems, MLRS and mortars and 10 warships.

During the drills, the two countries will work to improve the cooperation between the headquarters and interoperability between advanced troop and weapons control systems. Belarus and Russia will also test the provisions of new military regulations that have been drafted in both states.

According to the drills' scenario, extremist groups have penetrated Belarus and Russia’s Kaliningrad Region in order to carry out terrorist attacks and to destabilize the situation in the Union State. The extremists are supported by foreign countries receiving material and technical assistance, including weapons and military equipment by air and sea.

Although Belarus is hosting most of the exercises, their scenario implies an imaginary enemy not linked with any specific region.

Despite Russia inviting NATO experts and foreign journalists to observe the planned drills, the Zapad-2017 has prompted Baltic states' and Poland's claims of the drills allegedly being a "threat" to their security with Ukraine being the latest state beating that war drums over the upcoming exercise.

However, NATO Secretary General Jens Stoltenberg said that the alliance does not see any imminent threat posed against any NATO member by the drills.

When commenting on NATO states' reaction to the planned drills, the Russian Foreign Ministry said earlier that increasing military presence of NATO in Eastern Europe went unnoticed amid groundless criticism of the Russian-Belarusian Zapad-2017 military exercises.

History of the Drills

These purely defensive exercises take place in a simulated battlefield environment and aim to boost cooperation and cohesion between the Russian and Belarusian armed forces.

According to the Belarusian Defense Ministry, the exercise involved about 12,600 officers and soldiers, including about 6,500 from the Belarusian Armed Forces and other national military formations, about 1,800 reservists, as well as about 6,000 Russian soldiers and 30 Kazakh servicemen.

On September 16-22, 2011, Russia hosted the Union Shield joint exercises at its Gorokhovetsky and Ashuluk firing ranges in the Nizhny Novgorod and Astrakhan Regions. The drills involved about 12,000 officers and soldiers, with the Russian and Belarusian armed forces committing about 7,000 and 5,000 service personnel respectively. About 200 pieces of military equipment, including about 100 tanks, were also involved.

© Sputnik / Igor Zarembo
Zapad-2017 Drills: Russia Acting in Line With International Law, Senior MP Says
Russian and Belarusian defense ministries decided to hold the Union Shield-2011 exercises far away from the borders of the NATO member-states, thereby confirming the peace-loving policy of the Union State of Russia and Belarus and the defensive nature of the combined regional army group.

The Zapad-2013 strategic exercises took place on September 20-26. Military units conducted simulated combat operations at the Khmelyovka and Pravdinsky firing ranges in Russia’s Kaliningrad Region, as well as at the Brest, Gozhsky and Obuz-Lesnovsky firing ranges in Belarus.

The exercises involved almost 13,000 Belarusian and 2,500 Russian servicemen, 350 armored vehicles, including about 70 tanks, over 50 artillery pieces and MLRSs, as well as over 50 fixed-wing aircraft and helicopters. Over 9,000 Russian and over 200 Belarusian servicemen participated in the exercises held on the Russian territory along with about 180 pieces of military equipment, 10 tanks, about 40 fixed-wing aircraft and 10 Baltic Fleet ships.

The Zapad-2013 participants worked out combat training programs and the use of Russian and Belarusian forces for maintaining the Union State’s military security. According to the exercise scenario, extremist groups and gangs penetrated Belarus in order to stage terrorist attacks there and to destabilize the situation in the eastern European country. The units of the Russian Armed Forces were quickly redeployed to Belarus and helped to stabilize the situation in close cooperation with units of the Belarusian Armed Forces. They moved to seal off and destroy "illegal paramilitary units."

The Gozhsky and Khmelyovka firing ranges hosted the final stage of the exercise, with Russian President President Vladimir Putin and his Belarusian counterpart Alexander Lukashenko observing troop operations. Sukhoi Su-25 jets, as well as Mi-8 and Mi-24 helicopters hit "terrorist group" during the drills. The Mi-8 helicopters also conducted a tactical airdrop mission, sending Russian and Belarusian units behind the lines of imaginary enemies, while artillery systems hit the positions of the "militants." After the positions of the imaginary enemies were suppressed, motorized rifle units of the two countries' armed forces joined the fighting.

© Sputnik / Igor Zarembo
'No Signals Lithuania Should Be Afraid' of Russia-Belarus Zapad-2017 Drills
Within the framework of the drills, cooperation between different military branches of the Regional Combined Army Group of the Russian and Belarusian Armed Forces was worked out at the Khmelyovka firing range for the first time, with the Russian Navy’s units' assistance in repelling an amphibious landing of imaginary terrorists.

The 2015 Union Shield exercises was held on September 10-16 at firing ranges of Russia’s Western Military District in the Leningrad, Pskov and Kaliningrad Regions, as well as in the areas of the Baltic Sea used for combat training.

The exercises involved over 8,000 servicemen and about 400 pieces of military equipment. The participants of the drills had defeated "illegal paramilitary units" trying to destabilize the situation in the Union State. They also trained the data exchanges between the Union State’s headquarters during joint combat operations and while ensuring the interoperability of advanced troop and weapons control systems.