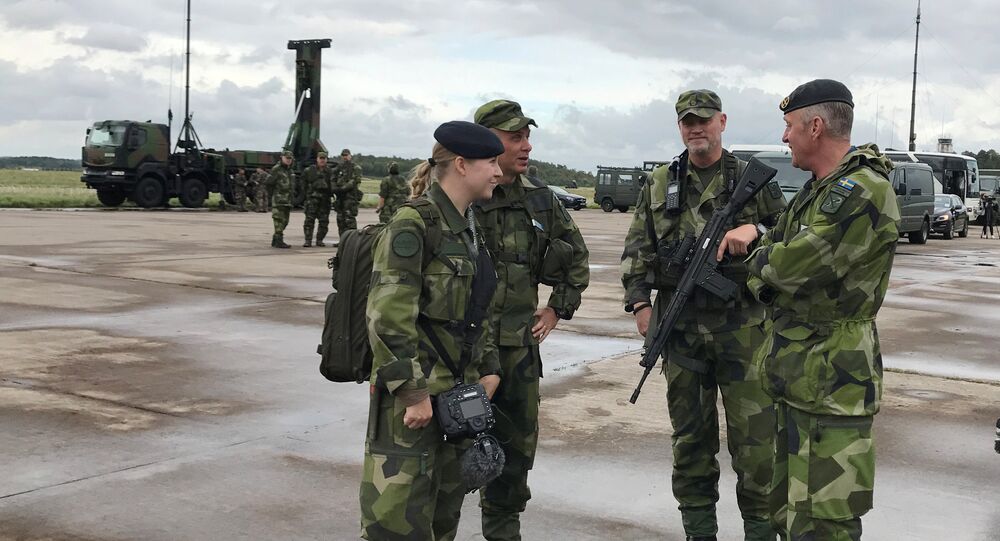 Sweden's biggest military exercise in over two decades kicked off in Gothenburg earlier this week. The Aurora 17 drills feature over 20,000 military personnel from Finland as well as the US, France and other NATO countries, which joined formally non-aligned Sweden to the consternation of peace activists, politicians and ordinary Swedes.

The drills mark the first time the controversial Host Nation Support Agreement has been implemented in the Nordic country. In practice, though, NATO troops can arrive in Sweden at Stockholm's invitation.

This show of force, covering the Stockholm area, Gothenburg, central Sweden and the Baltic island of Gotland comes during a period of sharp focus on its security, which is claimed to be endangered by Russia's "increased activity in the Baltic region." Perhaps unsurprisingly, the scenario of Aurora 17 involves an attack of a fictitious country simulated by the US, yet which bears clear resemblance to Russia.

© AP Photo / TT News Agency/Marko Saavala
Sweden Upping Its Ability to Chase Submarines Amid Two Major Baltic Exercises
Aurora 17 cost Sweden's state coffers 580 million SEK ($73 million), which is twice as much as the Armed Forces usually spend on military exercises in an entire year. Money, however, does not seem to be an issue for the Swedish army anymore, as Swedish "red-green" coalition government recently agreed a new defense deal with the opposition parties. Between 2018 and 2020, 6.8 billion SEK ($841 million) will go to the Swedish military, whereas another 1.3 billion SEK ($160 million) to civil defense, totaling $1 billion over just three years.

Swedish Defense Minister Peter Hultqvist called Aurora the country's biggest operation in 23 years, where the army, the air force and the navy collaborate in a single drill. In a statement, he also argued that the exercise was an important defense policy signal.

Earlier this year, US Lieutenant General Ben Hodges, who is the commander of the US Army in Europe, singled out the particular importance of Gotland. Last week, this take was shared by NATO Secretary General Jens Stoltenberg, who called Gotland "the focal point of the Baltic Sea" and argued that Sweden's and NATO's security were closely linked, which makes it worthwhile for them to perform joint drills.

Nevertheless, Sweden's largest exercise since the end of the Cold War, has divided Swedish society and has been met with severe criticism.

"It's our tax money. It could have been used for refugees, the poor and the planet's survival. There are no military solutions to conflicts," Inger Gustavsson of International Women's Association for Peace and Freedom (IKFF) told the newspaper Göteborgs-Posten, alluding to the gigantic bill of the exercise.

Tomas Magnusson, the chairman of the Swedish Peace and Arbitration Association, which condemned Aurora 17, argued that they were not against Swedish military drills as such, yet concluded that such exercises undermine Sweden's time-tested policy of non-alignment.

"Sweden has had freedom of alliance for 200 years, and this has benefited us in many ways," Tomas Magnusson stressing the adverse environmental impact of the exercise.

Karin Utas Carlsson, the spokesperson for the campaign Stop Aurora, also expressed her concern that Swedish media and politicians have long been trying to tilt Sweden's neutrality to NATO's and the US's side. Even if the Armed Forces denied that the exercise is about holding Russia in check, Carlsson argued that it was obvious.

"A look at the maps of the exercise is enough. We have all gone to school, right? Of course, it's a provocation," Karin Utas Carlsson told the Swedish news outlet Världen Idag, calling on Stockholm to refrain from portraying Russia as a villain and instead work for dialogue and cooperation.

​Carlsson agreed that Russia was "no angel state," yet nevertheless was highly critical of the media's using different benchmarks for different countries.

"We are being told about Russia's aggression on a daily basis, but somehow we never get to hear about US aggression, how they acted in such countries like Yemen, Syria, Libya, Afghanistan and Iraq," Karin Utas Carlsson said.

In addition to Swedish troops, Aurora 17 features some 1,500 soldiers from the US, as well as fellow Nordic and Baltic countries. For Sweden's part, it is accompanied by Northern Coasts, yet another international exercise in the Baltic Sea.