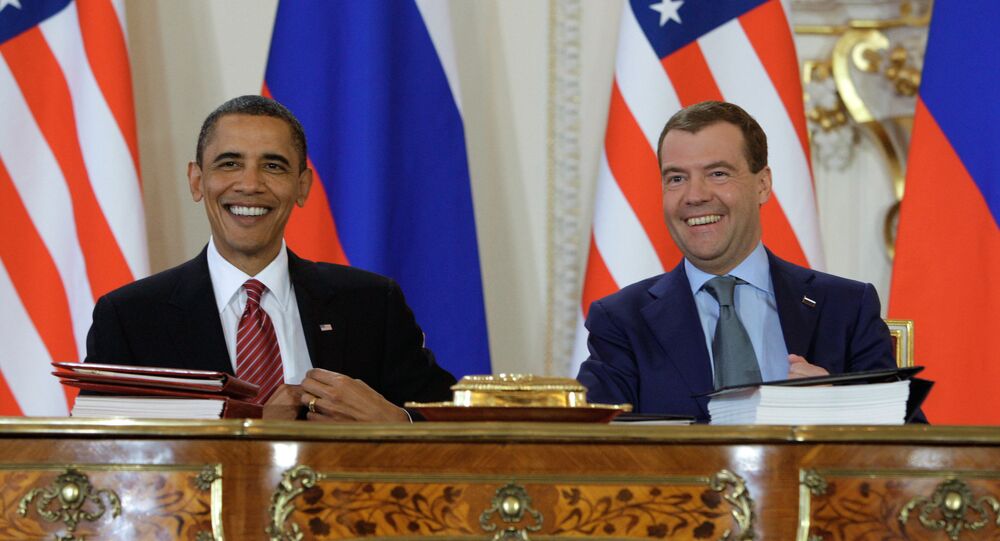 Director of the Russian Foreign Ministry's Department for Nonproliferation and Arms Control Mikhail Ulyanov says that the country intends to discuss with the US the possibility of the New START Treaty prolongation.

MOSCOW (Sputnik) — Russia is ready to discuss with the United States the extension of the Treaty on the Measures for the Further Reduction and Limitation of Strategic Offensive Arms (New START Treaty), Director of the Russian Foreign Ministry's Department for Nonproliferation and Arms Control, Mikhail Ulyanov, said Tuesday.

"Speaking about the new START, we should achieve the benchmarks for launchers and warheads by February 5, 2018, a lot of work should be done on this. As a matter of principle, the new START, which will be valid until 2021, provides for the possibility of a five-year extension. We have not taken a clear decision about it so far, but we are ready to consider such a possibility, at the very least, to discuss it with the United States," Ulyanov said in an interview with the Kommersant newspapser.

Ulyanov added that in order to begin the negotiations of the treaty's prolongation Washington should indicate that it considers the possibility to extend the new START.

© Sputnik / Vladimir Pesnya
Russia, US Agree on the Need to Comply With New START Treaty - Moscow
The New START Treaty entered into force on February 5, 2011. It stipulates that the United States and Russia must meet the Treaty’s central limits on strategic arms by February 5, 2018. The limits include the decrease of the number of weapons by the parties to 700 deployed intercontinental ballistic missiles (ICBMs), 1,550 nuclear warheads on deployed ICBMs and 800 deployed and non-deployed ICBM launchers.
...
Reddit
Google+
Blogger
Pinterest
StumbleUpon
Telegram
WhatsApp
21