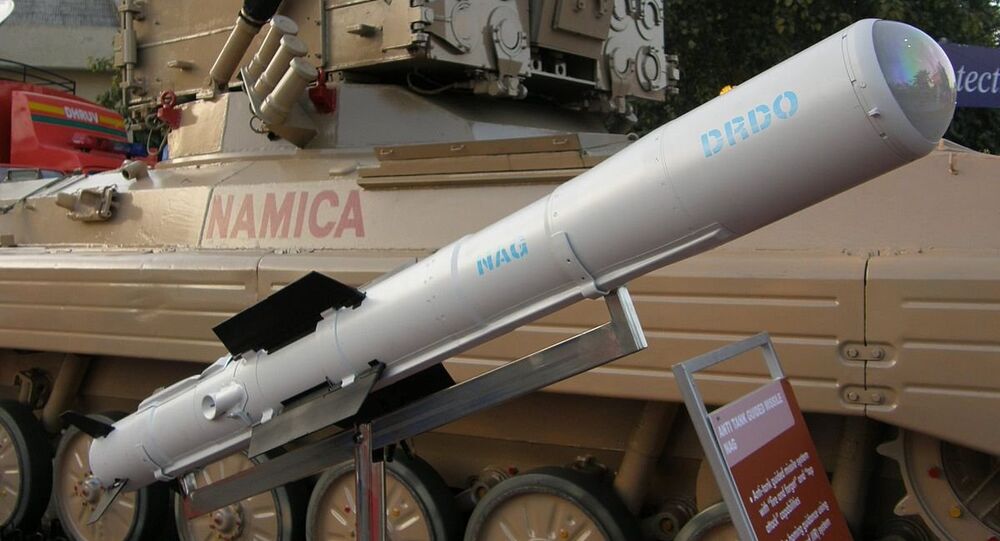 "India's indigenously developed 3rd generation Anti-Tank Guided Missile (ATGM), Nag has been successfully flight tested twice by DRDO (Defense Research and Development Organization) on 8-9-2017 against two different targets in the ranges of Rajasthan," reads the MoD's press release reads. "The ATGM Nag missile has successfully hit both the targets under different ranges and conditions with very high accuracy as desired by the Armed Forces."

"With these two successful flight trials, and the flight test conducted earlier in June in the peak of summer, the complete functionality of Nag ATGM along with launcher system NAMICA has been established and marked the successful completion of development trials of Nag Missile," the MoD statement went on to say.

The DRDO has been working on the Nag (Hindi for "Cobra") since 2009, spending approximately $47 million on its development. Nag is a fire-and-forget missile equipped with a targeting system that visually identifies targets before locking on and firing at targets up to 2.5 miles away.

They have also designed a missile carrier, the NAMICA, an improved version of the Soviet-designed BMP-2 infantry fighting vehicle that India uses extensively. The NAMICA has a retractable armored launcher that can carry four salvos of three missiles apiece.

The tests have been very promising, with few stumbling blocks. The final development trials were held in September 2016, and the Nag triumphed and entered mass production.

The DRDO is also working on the Helicopter-launched Nag, or the HeliNa for short. Its range is nearly twice that of the ground-based variant, and it will soon be a main armament of India's fleet of light combat helicopters. India intends to add their first domestically-produced attack helicopters to their Air Force's repertoire in 2018.

The HeliNa is still in development, and until it's completed India will have to rely on foreign-made air-launched anti-tank missiles for their combat helicopters.

At present, India primarily uses American, European, Israeli, Russian, and Soviet-made anti-tank missiles. The Nag is meant to phase out all of these these foreign weapons as part of New Delhi's "Make in India" initiative, a major part of which is to decrease India's reliance on foreign-made weapons.