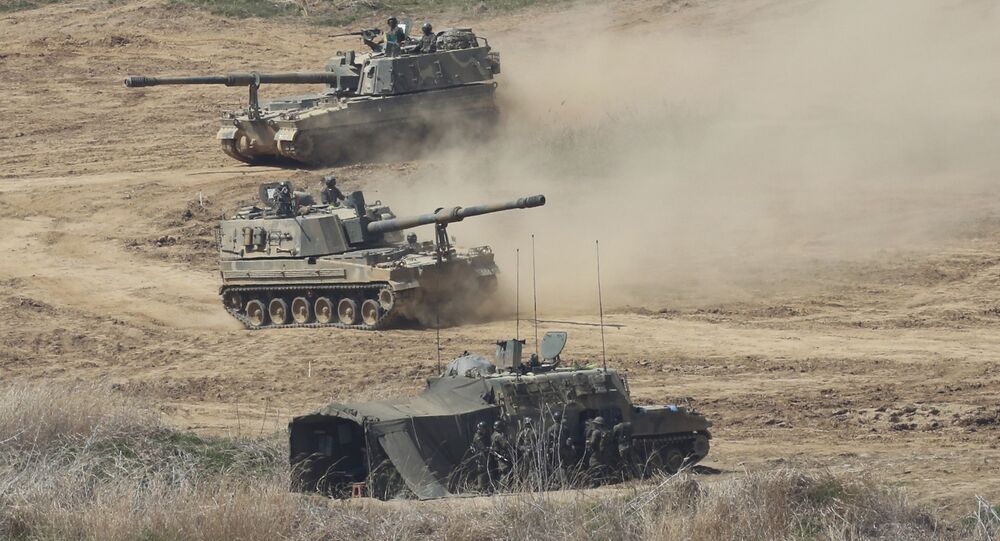 India’s ordnance factory has argued that the army should have taken positive approach towards country made Dhanush 155mm/45-caliber artillery rather than purchasing the substandard Korean K-9 which the Korean Army itself has reported to have rejected and refused to carry out further trials.

New Delhi (Sputnik) — India’s state own ordnance factory has questioned the reliability of the K-9 howitzer gun following reports of death of two South Korean soldiers in an explosion during an artillery training session in Gangwon province on Friday. The All India Defense Employees’ Federation (AIDEF) ordnance factory has written to the defense ministry seeking clarification on why the South Korean artillery gun K-9 howitzer was chosen by the Indian Army over the country-made Dhanush 155mm/45-caliber artillery. AIDEF represents thousands of workers & officials of state owned Ordnance Factory Board.

“Recently, two South Korean soldiers were killed during the trial of the K-9 Thunder howitzer gun and South Korean media reports have questioned the trustworthiness of the gun while pointing out that a Parliamentary inquiry in 2016 has said that there were 1700 reports of malfunctioning of this gun over the last five year,” reads a letter written by C Srikumar, General Secretary, All India Defense Employees’ Federation to the Indian defense ministry officials including defense minister Arun Jaitley.

“We fail to understand that why the Dhanush gun indigenously developed by Ordnance Factory Board is being sidelined by the Indian Army and Indian defense ministry even though the Dhanush gun has successfully completed 37000 round of firing in the trial, barring the recent incident of shell heating the muzzle brake,” Srikumar explained.

The Dhanush 155mm/45-caliber artillery gun is the Indian version of the Swedish 155mm/39-caliber Bofors howitzers and is currently undergoing an upgrade.  In the recent trial conducted by the artillery unit of the Indian Army, the gun reportedly failed on three occasions when the shell of the gun hit the muzzle brake during trials. “Our workforce is of the view that this defect can be rectified by minor change in design/ increasing the diameter for the muzzle etc. The government should have taken positive approach towards Dhanush rather than purchasing the substandard Korean K-9 which the Korean Army itself has reported to have rejected and refused to carry out further trials,” Srikumar added.

© AFP 2021 / DIPTENDU DUTTA
India Expedites Construction of Border Roads Amid Military Conflict With China
India’s defense ministry had formally awarded a $676 million contract to multinational engineering conglomerate, Larsen & Toubro (L&T), for supply of 100 units of 155mm/ 52 calibre tracked self-propelled gun systems to the Indian Army earlier this year. L&T will manufacture the K9 Vajra-T in partnership with South Korea’s Samsung Techwin. K9-Vajra is an enhanced modification of the K9 Thunder howitzer developed for Korean armed forces. The 47-ton K9 Vajra-T is powered by a German 1,000 hp MTU MT 881 Ka-500 V8 diesel engine which can fire up to 40 kilometers. The Indian Army had intended to own a howitzer having a high ground clearance which can be used across varied terrain.

The Indian Army has recently purchased and is planning to purchase several different gun types in order to equip its artillery regiments that had hardly seen new types of howitzers since the Bofors controversy.

The Indian government has ordered 114 Dhanush guns for induction into the army at a cost of $2 billion. First batch of 18 guns will be inducted this year, while 36 in next year and rest by 2019. Apart from that India is also purchasing 145 M777 155MM/45-caliber ultra-light howitzers from America’s BAE Systems for approximately $ 750 million.