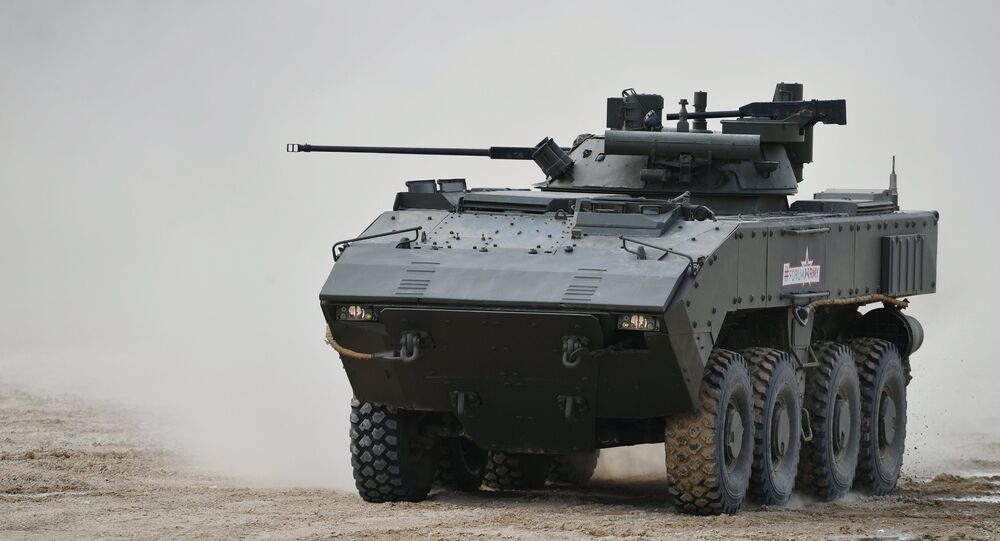 Visitors of the ARMY-2017 military show outside Moscow got their first detailed look at the Bumerang, Russia's new amphibious wheeled armored personnel carrier. Military officials and experts spoke to Izvestia about the technical requirements for the new vehicle, and how it's expected to integrate into Russia's Naval Infantry.

This week, patrons of the third ARMY-2017 International Military-Technical Forum got a unique opportunity to finally see Bumerang up close and in action. Previously seen only from a distance during parades on Red Square, the military show saw the new APC perform a dynamic exhibition, showing off its combat and maneuvering capabilities.

The Bumerang is capable of swimming independently for dozens of kilometers and hitting land-based targets from the water using its complement of onboard weapons. Furthermore, in accordance with the tactical and technical requirements for the vehicle demanded by the Russian Navy, the Bumerang must be fully compatible with Russia's latest high-speed hovercraft and landing ships.

Military experts expect the Bumerang to become a universal combat platform, capable of solving a wide range of military tasks. This is line with Russian armored vehicle makers' broader doctrine of modular vehicle design, designed with cross-compatibility, interchangeability, and wide configurability in mind. In the Navy, the Bumerang's missions will include amphibious troop landing, fire support and ground engagement.

Speaking to Russia's Izvestia newspaper, Admiral Vladimir Korolev, commander-in-chief of the Russian Navy, confirmed that developers have been presented with the technical characteristics for Bumerangs to be used by the Naval Infantry. The Navy expects the machine to be capable of independently overcoming not only small water obstacles, but have over-the-horizon landing and assault capability (i.e. the ability to swim from over 60 km from the coast). Furthermore, the Bumerang must be able to be deployed aboard Russia's fleet of landing hovercraft.

© Sputnik / Igor Zarembo
The Yevgeny Kocheshkov small landing hovercraft during a rehearsal of a Navy Day Parade in the Marine Canal of Baltiysk
© Wikipedia / Vitaly V. Kuzmin
This APC Packs a Punch: Russia's Newest Troop Carrier to Feature More Firepower
Both in amphibious mode and from aboard landing craft, the Bumerang must also be able to fire using all of its onboard weapons systems against coastal targets.

"An amphibious version of the Bumerang APC is being tested," Alexander Krasovitsky, general director of the Military-Industrial Company, the developer of the vehicle, told Izvestia on the sidelines of ARMY-2017. "The exact form of the vehicle is still being finalized according to the customer's requirements, so it's too early to speak in more detail about its capabilities," Krasovitsky added.

Presently, Russia's Naval Infantry is fitted out with the BTR-82A, the latest version of the BTR-80 APC, and with the 2S31 Vena 120-mm amphibious self-propelled artillery system.

© Sputnik / Said Tsarnaev
BTR-82A armored personnel carriers during a training exercise
© Photo : Artem Tkachenko
Meet Russia's New Ka-52-Equipped Lavina-Class Amphibious Assault Ship
Vadim Kozyulin, military expert and professor at the Academy of Military Sciences, pointed out that the Navy's plans also include the construction of a series of new large Lavina amphibious assault ships. These ships will be able to deliver up to 60 light armored vehicles to shore, dropping them off either via their bow door, with the help of speedy smaller landers. With this in mind, it's only logical that the Bumerang be fully compatible with the Lavina.

Ultimately, the Naval Infantry version of the Bumerang is expected to provide the Navy not only with a reliable seaworthy transport, but an advanced combat platform with superior firepower capabilities over its predecessor.

The Bumerang is one of several new combat platforms developed by Russian armored vehicle companies over the last few years. The APC's front-engine design is meant to protect the vehicle's crew and complement of troops from enemy bullets, grenades, and improvised explosive devices. This arrangement also provides for a safer and more convenient exit from the vehicle via its rear door.

The Bumerang's amphibious capabilities are provided by its sealed armored hull design, together with two rear-mounted jet propellers placed behind the vehicle's wheels. They provide the 20-ton APC with a maximum speed of about 6.5 knots (at least 12 km/h) over the water.

Unlike its BTR-82A predecessor, the Bumerang does not have fixed weapons, but rather can be fitted with a variety of remote combat modules with weapons whose calibers range from 12.7 mm to 125 mm. Several configurations include the Kornet anti-tank missile system, with autocannons, heavy and light machine guns and turrets, and other arrangements available. This universality allows the Bumerang to be adaptable to the needs of any branch of the Russian military, including the Army, the National Guard and the Naval Infantry.

Testing of the base model of the Bumerang is expected to wrap up later this year.