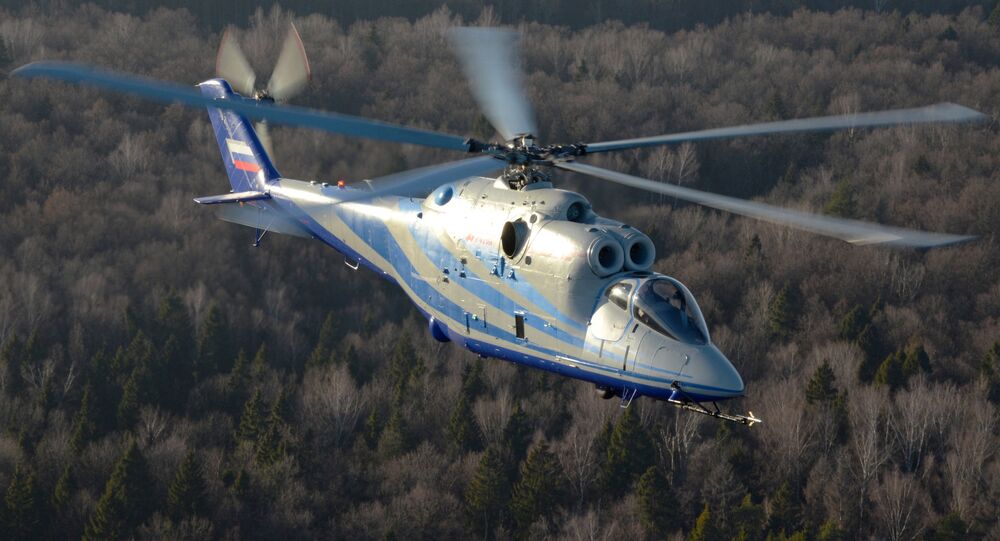 Russia is developing a new high-speed combat copter in addition to the existing Ka-52 and Mi-28 attack helicopters. The vehicle might be used for special military missions, according to a Russian expert.

By 2019, the Russian aviation industry is due to present a technical design for a high-speed combat helicopter for the Russian Aerospace Forces.

The contract for the air vehicle is expected to be signed between the Russian Defense Ministry and the Russian Helicopters company during the Army-2017 military forum which kicked off outside Moscow earlier on Wednesday.

© Sputnik / Vladimir Astapkovich
'Pragmatic Interest': Why Russia's Ka-52 Should Be Copter of Choice for Vietnam
The new helicopter may be based on the Mi-24 helicopter's platform but incorporate new technology; the new vehicle is expected to fly at a speed of up to 500 kilometers per hour, according to media reports.

Speaking at Heli Russia, the country's annual international helicopter industry exhibition, in May 2017, Russian Deputy Defense Minister Yury Borisov   announced the development of a high-speed combat helicopter which he said is due to make its maiden flight before the end of 2024.

"We have plans for a new state arms program for 2018-2025 which specifically stipulates the creation of a new high-speed helicopter," Borisov said.

Russian Helicopters' press service did not specify what company will become the lead developer of the project, only noting that several design bureaus and holding companies will be involved. The developments of the Russian companies Kamov and Mil are expected to be widely used.

Experts, meanwhile, suggested that the new helicopter will be designed for performing special combat missions.

"The first modification of this high-speed vehicle will definitely be used as a combat helicopter to help conduct various special operations, forays into the enemy's rear, support subversive groups and reconnaissance battalions," Russian aviation expert Roman Gusarov was quoted by RIA Novosti as saying.

According to him, this new vehicle "will take its own unique niche [in the Russian Aerospace Forces] without putting other helicopter modifications to the back burner."

© Sputnik / Sergei Soldatkin
State of Art Mi-28NM Copter to Be Delivered to Russian Airforce Starting 2018
In this regard, the expert recalled that it is the volume of the cargo compartment and the range rather than speed which is of special importance to transport helicopters, including the Mi-38, the Mi-17 and the Mi-26.

Gusarov was echoed by Colonel-General Nikolai Antoshkin, former deputy commander of the Russian Air Force, who described the prospects for the development of Russian high-speed attack helicopters as "very good," according to RIA Novosti.

"At the front, a high speed allows a helicopter to quickly move over the battlefield and quickly escape after it accomplishes its mission. It also makes shooting down a helicopter like this a tricky task," Antoshkin said, touting the new speedy attack helicopters as "the future of frontline aviation."