Syrian General on Unique Op Behind Daesh Rear: 'We Must Raise Flag of Victory'

"This is the great Russian army! We want to say hello to all Russian lands from southern seas to the North Pole. We must raise the flag of victory!" the Syrian general said.

Chief of the Russian General Staff Valery Gerasimov praised the general and his soldiers for the successful operation west the Syrian city of Deir ez-Zor conducted on August 12.

"You have been awarded by Russia's Defense Minister, Army Gen. Sergei Shoigu, for courage in a successful offensive along the Euphrates River, your participation in and the liberation of the strategic Es Suhne settlement and your leadership in the tactical landing and in the capture of the Al-Hadar village," Gerasimov said. 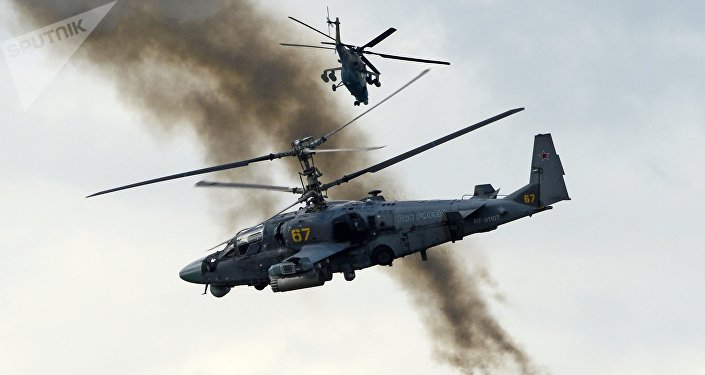 © Sputnik / Evgeny Biyatov
Syrian Paratroopers Free Area in Daesh's Rear for 1st Time in Unique Op With Russian Ka-52 Choppers' Help
On August 12, Syrian paratroopers were deployed behind Daesh's positions in 20 km from the battlefront; the operation resulted in the liberation of the town of al-Hadar located on the border between Raqqa and Homs provinces.

This was the first time such an operation was carried out since the beginning of hostilities against Daesh terrorist group in Syria. Russian Ka-52 combat helicopters conducted strikes in the area to help the Syrian army's campaign. Moreover, Russian military advisors took part in the preparation of the Syrian paradrop.

Last week, the Russian Defense Ministry said that that Russian military aviation helped the Syrian army liberate Daesh's hotbed in the Homs province, the town of As-Sukhnah. The development paves the way for the operation to free besieged Deir ez-Zor.