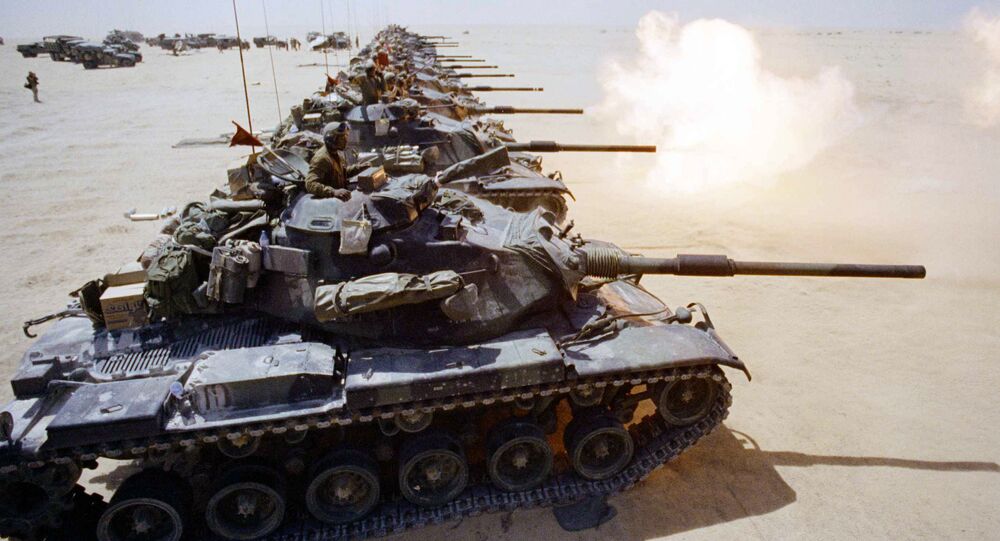 The UK government saw Iraq's 1990 invasion of Kuwait as an "unparalleled opportunity” to hawk military wares to international customers, particularly the Gulf states, declassified documents reveal. An arms trade researcher has told Sputnik their efforts created strong bonds between the UK and repressive regional powers that endure to this day.

The memos, released by the National Archives, demonstrate that in the buildup to the Gulf War, ministers and civil servants alike were keen to ensure UK arms manufacturers would be well-placed to take advantage of any rise in orders for military hardware that could potentially result.

The documents include confidential briefings between then-Defense Procurement Minister Alan Clark to Prime Minister Margaret Thatcher, dispatched as he toured the Gulf on the eve of conflict.

In a letter marked "secret," written on 19 August 1990, days after Iraqi forces invaded Kuwait, Clark said that the likely interventionist response from the US and its allies was an "unparalleled opportunity" for the Defense Export Services Organisation (DESO).

"Whatever deployment policies we adopt I must emphasize that this is an unparalleled opportunity for DSO; a vast demonstration range with live ammunition and real  trials…I have penciled a list of current defense sales prospects at the start of the crisis. These are now likely to be brought forward and increase in volume if we do our stuff," he wrote.

Other memos show Clark used meetings with the emir of Qatar and Bahrain's defense minister to push for arms exports. In further briefings, he identified the United Arab Emirates, Saudi Arabia, Egypt and Jordan as potential customers.

While the times may have changed, this mindset hasn't. The government continues to prioritise arms dealer profits over human beings welfare https://t.co/p5LD9W6IR0

In an attempt to further boost interest among potential clients, Clark proposed sharing "high sanitized" intelligence briefings with regional leaders, as an "entree" for DESO representatives.

Moreover, Clark and other officials, including Thatcher's private secretary Charles Powell, were keen to stress to Gulf monarchs how quickly and "heavily" the UK would respond to Hussein's actions, particularly in comparison with other arms export rivals such as France.

Joe Lo, a researcher at Campaign Against Arms Trade (CAAT), notes public reaction to the released documents has been extremely negative.

"People are very angry at how cynical this correspondence is. Polling shows the majority of the public opposes arms sales to repressive states. It's even worse the memos were written in the days after the invasion, when people around the world were shocked and concerned about a potential humanitarian catastrophe, ministers simply saw it as an opportunity to sell more arms, and were quite excited at the prospect," Mr. Lo told Sputnik.

Moreover, he notes weapons sales increased significantly as a result and strong commercial relationships were cultivated with the region's governments, which endure to the present day.

The 2016 UK Defense and Security Organization report shows the UK won US$8 billion of arms contracts — nine percent of the global market, and half of the total flowed from the Middle East.

"These countries often use these weapons to repress their own people — LGBTs, liberals, democrats — to instil fear in their populations. Also, these arms are used in the Saudi-led coalition's campaign in Yemen, which has been ongoing for over two and a half years. Thousands have died, ports, mosques and markets have been bombed, and millions are on the edge of starvation," Mr. Lo said.

Due to official secrecy and the opacity of the arms industry, it's difficult to determine whether any conflicts since have similarly served as marketing opportunities for UK arms manufacturers —after all, it has taken 27 years for these memos to be released, which could suggest similarly incriminating paper trails could be released 27 years after other major conflicts. Nonetheless, Mr. Lo believes it's safe to assume it has happened "a lot" since the Gulf War.

"We haven't seen any significant change of government policy in respect of arms exports or human rights, so if it happened then it's probably still happening. We're campaigning for an end to arms sales to repressive regimes, and have been in High Court recently trying to suspend exports to Saudi Arabia," Mr. Lo concluded.