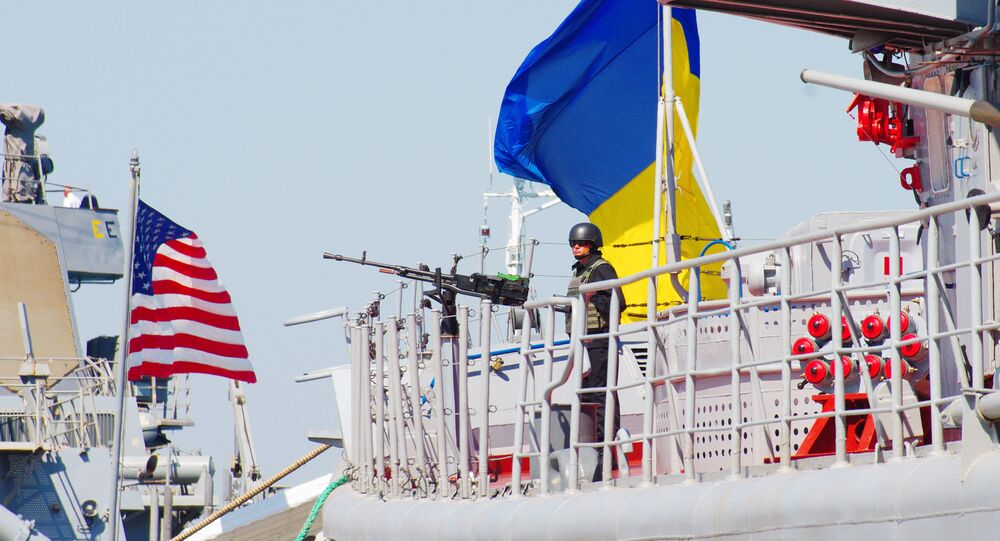 American specialists have launched the construction of a maritime operations center at the Ochakiv Naval Base in Ukraine, the United States Navy reported on its website. The groundbreaking ceremony took place on July 25.

"The Seabees, assigned to Naval Mobile Construction Battalion (NMCB) 1, have been in Ochakiv since April to establish contracts, obtain construction permits, and perform other logistical necessities needed for long term sustainment of the maritime operations center project," the Navy said.

According to the report, the facility is one of three projects currently planned to be implemented in Ochakiv. It will serve as an operational hub during future military drills hosted by Ukraine. Other projects in the area include a "boat maintenance facility and entry control points with perimeter fencing."

© Sputnik / STR
US Guided-Missile Destroyer Leaves Ukraine's Odessa After Major Black Sea Drills
Ivan Konovalov, director of the Center for Political Environment think tank, suggested that the US does not want to build a large naval facility in Ukraine. Instead, Washington’s goal is to indicate its military presence in the region.

"We could expect that they will go forward with this. The Pentagon will further create similar facilities in Ukraine. They’re declared to serve Ukraine’s interest but in fact, they are exclusively in the interests of the US," Konovalov told Sputnik.

"The Americans are perfect strategists and it’s no coincidence they picked this place. Ochakiv is a very good site for the deployment of any kinds of forces. In military and strategic terms, this facility could be interpreted as an outpost aimed with surveilling Russia’s forces in Crimea. This is a serious military and political campaign directed first of all against Russia. The worst scenario for Russia would be the deployment of US missile defense system components in Ochakiv," Katasonov said in an interview with Sputnik.

© AFP 2021 / Sergei SUPINSKY
US Allocated $25Mln in Security Aid to Ukraine in July - Embassy in Kiev
However, Alexander Khramchikhin, director of the Russian Institute for Political and Military Analysis, warned from making alarmist conclusions.

According to the expert, the US will not be able to deploy significant military assets to Ochakiv without Russia’s knowledge.

"Of course, the Americans may regard this facility as a strategic site. But in the short run, the operations center is unlikely to become a threat to the Russian fleet. If even some Special Forces personnel are deployed there will be no risks," Khramchikhin pointed out.

Speaking with Radio Sputnik, political analyst Roman Manekin noted that such activities by the US would further deepen domestic and foreign tensions over Ukraine.

"I don’t want to overestimate the importance of such assistance for Ukraine itself. There is an internal conflict in Ukraine. By its actions, the US only deepens the crisis. At the same time, Washington wants to use Ukraine as a training range for its military technology and weapons. I think that such a situation contradicts Ukraine’s national interests," Manekin said.

In January, the Ukrainian Parliament adopted a law allowing foreign troops to be present in the country in 2017 to participate in multinational drills.

© AFP 2021 / DOD
Oil on Flames: Why is US Sending Arms to Ukraine?
In particular, the document outlines the admission of the US military, the military of other NATO member states and the countries participating in NATO's Partnership for Peace program totaling up to 3,000 personnel with weapons and military equipment, up to six aircraft and helicopters for up to 365 days in January-December 2017.

In July, Ukraine hosted the 2017 Sea Breeze international naval exercise, involving the US and 16 other countries.

Moreover, earlier this month, US media reported that the US defense and diplomatic establishment had devised a plan to supply lethal arms to Ukraine.

The weapons, characterized as "defensive," may include Javelin man-portable anti-tank missiles, anti-aircraft weapons and other advanced weaponry, according to The Wall Street Journal.

Impossible to Prevent US Weapons Sent to Ukraine From Expanding Conflict