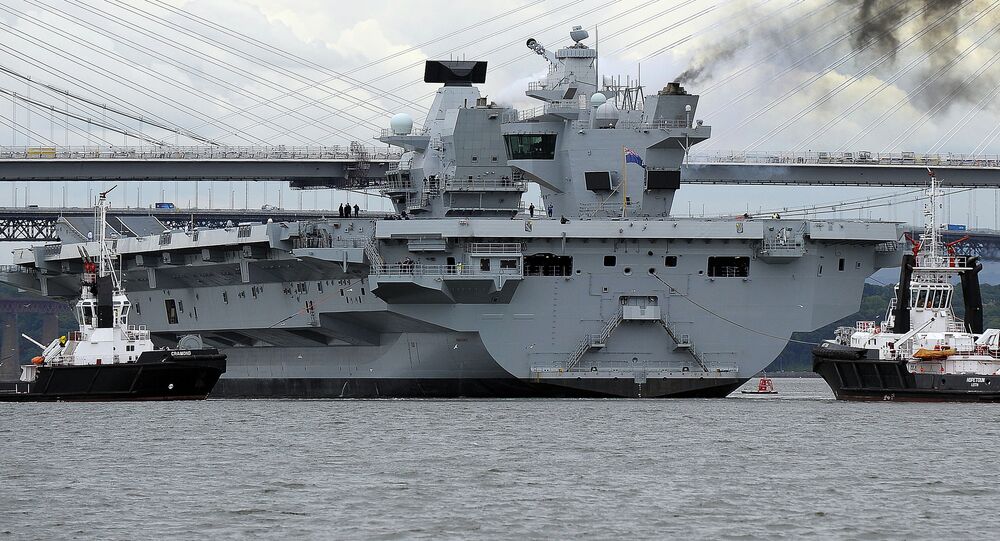 UK Defense Secretary Michael Fallon has said HMS Queen Elizabeth, the country's long-awaited flagship aircraft carrier, could sail into Portsmouth ready for deployment as soon as August 17. If true, it will mark the end of a long and troubled gestation period – although doubts remain about what craft the UK will be able to launch from the vessel.

The 71,650-ton carrier is the biggest warship ever to be built in Britain, and has been undergoing sea trials since setting sail from Scotland's Rosyth dockyard in June. While weather conditions mean the exact date of the historic moment is yet to be confirmed, the window for entry will run August 17-22 at the latest.

"In just two weeks' time, the most powerful warship ever built for Britain's famous Royal Navy is set to sail into her proud new home in Portsmouth," said Sir Michael Fallon. "HMS Queen Elizabeth will be the Royal Navy's flagship for the next 50 years, keeping us safe by deploying across the seven seas, using her strike power to deter our enemies," he said.

Britain’s iconic @HMSQnlz is set to enter her new home in Portsmouth in about two weeks time. Find out more here: https://t.co/FAwXiC4Sv4 pic.twitter.com/eC2vHEtJEX

The UK government hopes HMS Queen Elizabeth will serve purposes ranging from the provision humanitarian relief to high-end warfighting — although even if it remains statically moored in Portsmouth for half a century, ministers will likely still be delighted.

After all, it's taken two decades for the ship to reach the sea — in 1997, Tony Blair's Labour government published a report that concluded there was an urgent need for Britain to regain its aircraft carrier capabilities, lacking since 1966.

However, the UK naval budget was significantly squeezed during the "War on Terror" — it took until 2007 for a contract for the vessels to even be announced, and another year for it to be awarded. Uncertainty continued to mire the project for many years afterwards, with spiralling costs (in 2013, then-Defense Secretary Philip Hammond announced the vessels would cost over US$8 billion to complete) and operability concerns leading some to suggest the project would never be realized.

In any event, despite the impending deployment of HMS Queen Elizabeth, the Royal Navy overall remains at a historic low point in its strength and capabilities — the 2010 Defense Spending Review cut a vast swath of ships, aircraft and staff from the UK armed forces, leaving the country with a mere 19 surface escorts, a figure campaign group Save The Royal Navy says is "totally inadequate" even for the Royal Navy's routine tasks, and allows no contingency to replace combat losses, breakdowns or other unexpected cataclysms.

Five new lightly-armed offshore patrol vessels are scheduled to be delivered by 2021, but they will replace four already relatively modern OPVs currently in service, a net gain of just just one vessel. When the aircraft carriers come into service, they will need escort vessels to make an effective carrier task group and these can only be provided by withdrawing ships from standing commitments.

Moreover, the carriers' capabilities have been significantly pared down to save on cost. While originally planned to be conventional carriers akin to those employed by the US and Russia, they have been scaled down to less impressive vertical and/or short take-off and landing craft.

While savings were no doubt made, the move reduced aircraft options significantly, meaning HMS Queen Elizabeth's worth now hinges almost entirely on the success of the F-35B Lightning II Joint Strike Fighter, produced by US defense giant Lockheed Martin.

The most expensive weapons system in military history, the "fifth generation" jet fighter has stealth capabilities, advanced networked electronics for situational awareness and low-probability intercept radar, among other gadgetry. It can also fly at a maximum altitude of 15 kilometers, and reach speeds of Mach 1.6.

Prices range between US$100 million (£77million) and US$130 million (£100 million) per plane, but around US$200 million extra could be spent due to hidden costs, such as spare parts and the price of upgrading software.

Moreover, despite the plane's apparent technological primacy, some fear the F-35B's software system could be susceptible to cyberattack from foreign powers — the first tranche of 48 F-35Bs to be purchased will be the same sort the US was forced to ground in June due to software glitches.

Still, as the aircraft carrier is finally seafaring, the UK government may be more than willing to overlook budgetary and technological issues to ensure the project isn't an unmitigated failure.