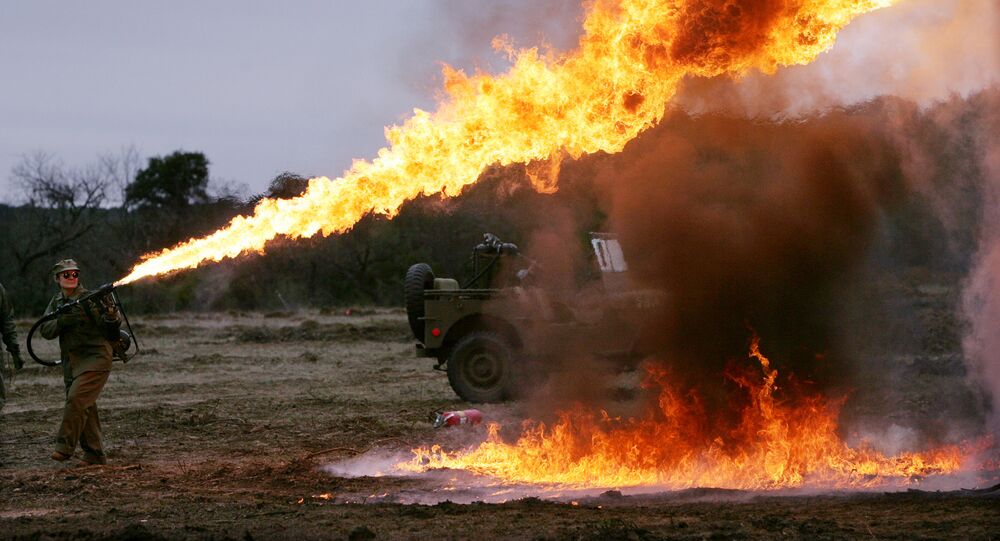 The second Hague Conference which took place 110 years ago, from June to October 1907, determined in many respects the rules of war for the entire 20th century.

© REUTERS / Rodi Said
US Coalition Reportedly Launches Strike With Banned Phosphorus Bombs on Raqqa Hospital
The conference involved delegations from 44 nations and resulted in 13 conventions, including on the laws and customs of war on land, and on the pacific settlement of international disputes, on the rights and duties of neutral powers in case of war etc. Some of the conventions have remained in force to the present day.

Both Hague Conferences (the first conference was held in 1899) introduced a series of prohibitions concerning weapons and the rules of warfare, including prohibiting the use expanding bullets, the use of projectiles with poisonous gases and the discharge of projectiles from balloons.

However, throughout the 20th century the world saw several new types of weapons that were prohibited. Here is a look at the five most deadly weapons banned by international conventions.

Expanding bullets are officially prohibited in warfare, but are still in use for hunting and by some police forces. They are designed to expand on impact, sometimes as much as twice the diameter, resulting in much larger wounds to the target. Due to their stopping power, they are often used for hunting.

The first expanding bullets were produced in the early 1890s and were given the name “dum-dum,” after a British military facility located near Kolkata, India. There were made of soft steel and had a hollow-nosed designed to mushroom on impact. In the majority of cases, the wounds they produced were deadly or resulted in disability.

Today, regular military forces do not use expanding bullets. International law prohibits their use in any armed conflict. This has been disputed by the United States that insists that expanding rounds can be used when there is a clear military necessity. However, the adoption of an amendment to Article 8 at the Review Conference of the Rome Statute makes the use of expanding bullets a war crime.

At the same time, since expanding rounds are prohibited only in military conflicts they are still used by law enforcement agencies in many countries. They allow for quickly neutralizing an attacker and prevent collateral damage in crowded areas.

© AP Photo /
A napalm strike erupts in a fireball near U.S. troops on patrol in South Vietnam, 1966 during the Vietnam War

This deadly weapon became globally known during the Vietnam War, but napalm was also used in World War II. Napalm is a flammable liquid, a mix of a gelling agent and either gasoline or a similar fuel. Napalm is very cheap and easily produced. Napalm easily catches fire and sticks to surfaces and skin, inflicting severe burn wounds.

During the war in Vietnam, the US military used napalm to burn down whole villages and forest areas, destroying enemy hiding places. Napalm was used in aviation bombs, flamethrowers and incendiary charges. Its use often resulted in casualties among civilians and friendly forces.

© AP Photo / Nick Ut, File
This is a June 8, 1972 file photo of South Vietnamese forces follow after terrified children, including 9-year-old Kim Phuc, center, as they run down Route 1 near Trang Bang after an aerial napalm attack on suspected Viet Cong hiding places

The UN Convention on Certain Conventional Weapons (CCW) banned the use of napalm against civilian populations in 1980. However, a number of countries have not ratified all of the protocols of the CCW.

© AP Photo / Mohammed Zaatari
Saudi Coalition's Use of Cluster Bombs in Yemen 'Shows Callous Disregard for Civilian Lives'
The Convention on Cluster Munitions (CCM) was adopted in 2008 in Dublin. As of July 2017, 108 countries have signed the treaty and 102 parties have ratified the document.

Major producers and users of cluster bombs, such as the US, Russia, China, India, South Korea and Israel, have not acceded to the treaty, citing the high efficiency of this type of weapon. At the same time, these countries observe the restrictions on the use of cluster munitions, including the ban on their use in heavily populated areas.

Aviation cluster bombs are the most popular type of cluster munition. A cluster bomb consists of a hollow shell and dispensers containing bomblets weighing up to 10 kilograms. Each dispenser can contain up to 100 bomblets, including anti-personnel, anti-tank, incendiary, etc.

After a bomb is discharged the bomb’s shell explodes at a certain altitude and the bomblets blanket a vast area. Cluster munitions are very effective against dispersed targets. One of their main disadvantages is that not all of the submunitions detonate after reaching the ground without locating a target. Modern cluster bombs usually have a self-destruct mechanism reducing the risk of unintended civilian deaths and injuries.

White phosphorus munitions were formally prohibited by a 1977 amendment protocol to the Geneva Conventions for the Protection of War Victims, banning weapons that "cause superfluous injury or unnecessary suffering."

© REUTERS / Rodi Said
White Phosphorus Use in Syria, Iraq: 'Nothing Will Change' Unless Western Govts Do
White phosphorus munitions were used in World War I by German and British forces, by the German air force during World War II, by the US military in the Korean War and other conflicts. According to media reports, they were also used by Ukrainian forces during the conflict in Donbass and by the US-led coalition in Syria.
© Sputnik / Andrey Stenin
Ukrainian soldiers shoot at the village of Semyonovka with phosphorus shells

White phosphorus is highly flammable and self-igniting upon contact with air. White phosphorus munitions are used against personnel and military equipment. They can cause injuries and death by burning and smoke inhalation.

Different types of land mine have been used by militaries around the world since the beginning of the 20th century.

A land mine is usually concealed under or on the ground and designed to destroy or disable enemy targets, ranging from personnel to vehicles and tanks.

The use of land mines is highly controversial because they can remain dangerous many years after a conflict has ended. According to expert estimates, several million land mines are left after conflicts in different parts of the world.

© CC0 / Sgt. Scott Biscuiti
Sergeant Anthony Jacks placed a claymore mine during a combat shooting on September 20, 2009. (File)
© REUTERS / Russian Ministry of Defence
Mission Accomplished: Russian Deminers Defuse 19,000 Explosives in Palmyra
A number of public campaigns were organized against the use of land mines. They were banned by the 1997 Convention on the Prohibition of the Use, Stockpiling, Production and Transfer of Anti-Personnel Mines and on their Destruction, also known as the Ottawa Treaty. However, a number of countries, including the US, Russia and China, have not signed it.