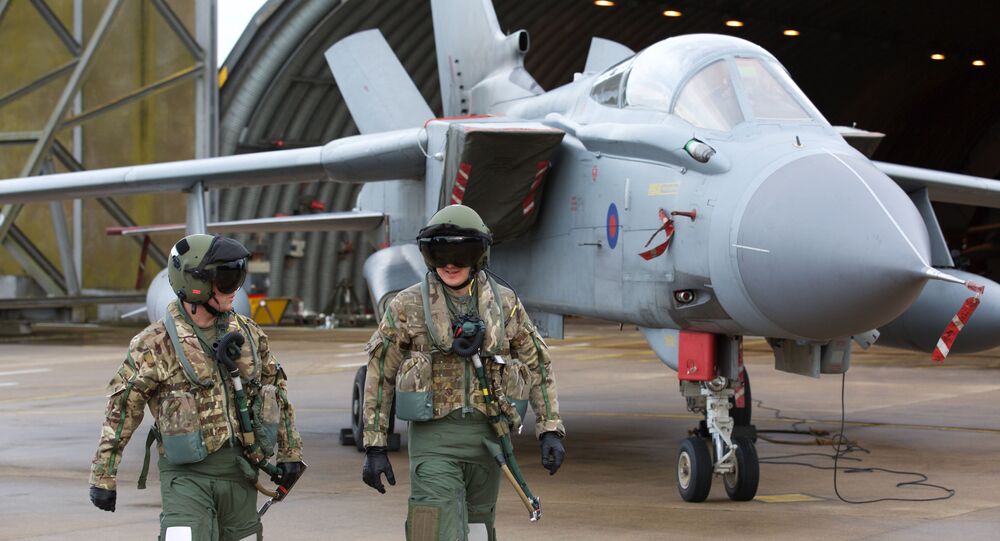 Disturbing photos have been released showing Rebecca Crookshank, a 21-year-old Royal Air Force recruit, being forced to undergo a horrific, sexually-charged "initiation" with male cohorts at RAF Mount Alice in the Falklands. The disturbing revelation comes as the UK pushes for more women in the ranks of the armed forces.

The series of shocking snaps depicts senior male officers completely nude, save for yellow rubber gloves obscuring their genitals, holding Crookshank — the only woman among 28 men at the base — in a series of compromising sexual positions.

She served in the RAF for four years after joining at the age of 17, and was posted to RAF Mount Alice for four weeks in 2001.

Now 36, the North London resident has dedicated herself to fighting sexual abuse in the military, and has released the images to make plain the extent of harassment female soldiers and cadets can be subjected to in the UK military.

For all those who are silenced. Zero tolerance of abhorrent crimes in any workplace #Institutional #Injustice https://t.co/9641BgsIMA pic.twitter.com/M6tuF0yDet

When Crookshank arrived, a row of male soldiers with their buttocks exposed "greeted" her. The vile incident would set the tone for the "dark time" to come, she said. That evening, the "initiation ceremony" took place.

On an another occasion, her fellow soldiers thought it would be funny to cable tie her to somebody else's bed. While fully clothed and eventually released, she was struck by "a darkness" — "a fear" her ordeal could have easily entered an "unthinkable" realm.

When more female recruits arrived, she claims corporals would have sex with "scared" female trainees as young as 16. When she made a formal complaint about such abuses of power, the interview was conducted in her bedroom, leaving her feeling "violated" — she was subsequently told if she kept quiet, she could have a ride on a Tornado F3 plane.

Such was the aviation enthusiast's disgust, she left the RAF shortly afterwards.

"The abhorrent behavior I experienced in 2001 may be a long time ago to some, but it has had a huge impact on my life and I will not be silenced. If one other human being reads my story and finds the courage to speak out about their personal experience of abuse in the military or any workplace for that matter, then together we can move closer to a change in behavior, zero tolerance of injustice, a positive shift in the face of adversity," Crookshank said.

It's not merely in the UK Armed Forces that such abhorrent treatment is reserved for female soldiers.

In February, an investigation conducted by the German Armed Forces, the Bundeswehr, found female soldiers at Pfullendorf military base were systematically forced to perform humiliating strip and pole dancing shows for officers, as part of their own "initiation" into the military.

For example, one recruit — "Nicole E" — recounted instructors repeatedly compelling her to endure embarrassing "recruitment tests" involving pole dancing in the barracks. Spectators often took pictures of these events, claiming the photos were part of the training. Supervisors tasked with monitoring the activities at the base apparently regarded these situations as "absolutely normal," and some even took part.

Moreover, during "training sessions" at the base, female recruits were forced to strip naked, and then touched by higher-ups in "intimate" areas without wearing gloves. "Smell tests" were also performed.

While the bulk of the abuse focused on female recruits, male soldiers in training did not escape the abusers' attentions, being forced to take part in "absolutely senseless and apparently sexually motivated medical exercises" that involved soldiers inserting roller bandages into their anuses.

The RAF Regiment will open close combat roles to women ahead of schedule, the Defence Secretary has announced today https://t.co/lS5xIhgSw4 pic.twitter.com/crVgpHMAiE

​Crookshank's revelations will likely be uncomfortable reading for UK military top brass and defense ministers, given the country is engaged in a controversial push to open up close combat roles to women for the first time.

In July, Defense Minister Michael Fallon announced women would be allowed to serve in the UK's Royal Air Force Regiment, the RAF ground fighting, close combat division, for the first time from September.

Such is the UK government's determination to get more women in the army, it is offering flexible working patterns to fit in with family life — the Queen's Speech included proposals for a bill that would include part-time service and special arrangements to ensure individuals are not deployed too far away from home, and personnel returning from maternity, parental or adoption leave are offered more options to support an easier transition back into duty.